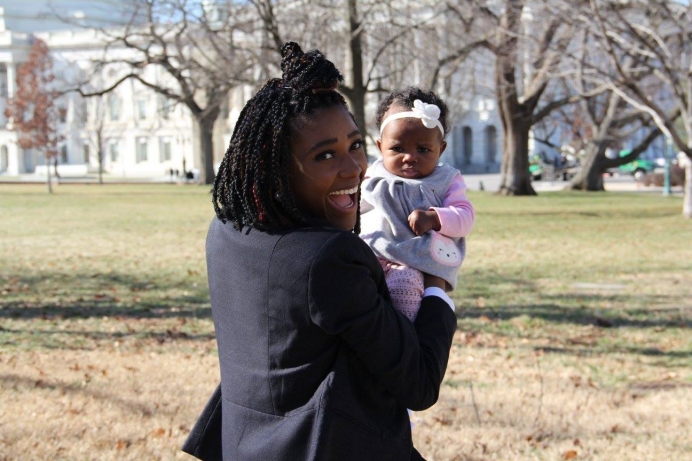 Janai and baby "Marz" exemplify the pro-life power of one at the March for Life and Heartbeat's Babies Go to Congress. Photo By: Lauren Bell, Heartbeat International

At March for Life, Houston Mom Personifies the Power of One

Among the vast crowd that descended on the nation’s capitol Friday for the 44th annual March for Life, one first-time marcher, a young single mother named Janai, personified the event’s 2017 theme, “The Power of One.”

Just a year ago, Janai’s world felt like it was coming to an end. Janai was only a few classes shy of earning her bachelor’s degree in Houston’s impoverished Fifth Ward when she was date raped.

In the blink of an eye, Janai went from the cusp of graduation to the specter of facing an unexpected pregnancy that threatened far more than her educational and career goals. A native of Washington, D.C., Janai was still relatively new to Houston and so distant from a family support structure that she was now facing the threat of homelessness.

No matter how many pregnancy tests Janai took, they all told her the truth she would eventually need to face head-on. And she was going to have to do it alone.

“I felt like a stereotype, that everything was wrong,” Janai said. “When you’re young, pregnant, not married, everyone thinks you’re crazy. I didn’t want that. It was hard.”

Pregnant, alone and with what seemed like insurmountable obstacles lying before her, Janai began searching online for a free pregnancy test and free ultrasound near her. She needed proof of her pregnancy to apply for state-level assistance, but as she looked online, she found that most clinics near her would charge $40 to run the tests she needed.

One search result stood out, however, and it was Houston Pregnancy Help Centers, a pro-life medical clinic with locations downtown and in the Fifth Ward. The organization offers free pregnancy tests and ultrasounds at both locations, so Janai made an appointment at the Fifth Ward site.

“I was praying that she was going to say ‘No,’” Janai says of that initial ultrasound. “It changed my life. It was amazing. I heard a heartbeat, and it wasn’t just any heartbeat, it was a heartbeat that my body created.”

Along with the technological help that the ultrasound provided, Janai recalls that the nonjudgmental support and understanding of the center’s ultrasound nurse helped give her the confidence she needed to continue with her pregnancy.

In time, the center would connect her to a community resource called Lifehouse, a maternity home for expectant mothers. Janai lived there until she gave birth to baby “Marz” in November. She then walked with her degree in marketing in late December, marking the end of an eventful year for both mother and child.

Tweet This: #Houston mom personifies Power of One at @MarchforLife. #prolife #WhyWeMarch

“I never thought I’d be the type of person who could push a stroller, carrying a baby and holding a bottle with my chin while trying to pay a bill,” Janai said. “It’s so funny how life works out. I just got a lot of support from the pregnancy center, and it was the extra support I needed. Everyone I connected with through Fifth Ward Pregnancy Center was so genuine and caring. I was just amazed.”

Over the past year, while Janai has moved from initial contact to new mom, the staff at the pregnancy center has kept up with her, checking in to see if there was anything they could do to help her throughout her pregnancy and into motherhood.

Before she welcomed Marz, Janai got a call from Lauren Barron, Fifth Ward Pregnancy Center’s case manager, asking if she would be willing to attend the March for Life, as well as Heartbeat International’s Babies Go to Congress, which took place on Thursday before the march.

As part of Babies Go to Congress, Janai and her baby girl made four visits to congressional offices Thursday, including those of Texas Republican senators Ted Cruz and John Cornyn and two Democratic members of the House of Representatives, acting as a show-and-tell embodiment of the power of one.