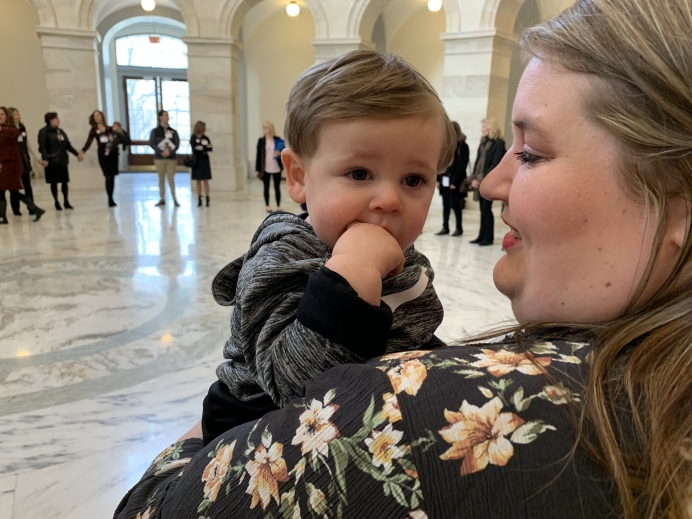 Brantlee and mom Brittni, one of the mom's whose story was part of Heartbeat International's amicus brief in Dobbs v. Jackson Women’s Health. Heartbeat argues that women don't need abortion because they are strong, have the support of pregnancy help organizations, and things are very different since Roe and Casey were decided - making the two decisions' legal precedent obsolete. Lisa Bourne/Heartbeat International

Women do not need abortion to participate in society, Heartbeat International is telling the U.S. Supreme Court. And given the pervasive support provided by the pregnancy help community, the idea that women must choose between their life and the life of their unborn child is obsolete.

Women have what it takes to prevail in challenging circumstances and realize their dreams, the pro-life network says, and coupled with the assistance provided by PHOs to women in need, this renders the abortion as a legitimate need argument passé.

“The truth is, women are strong and capable of both achieving their educational and career goals and becoming excellent mothers,” said Danielle M. White, general counsel for Heartbeat International. “Every day across the nation, pregnancy help organizations educate, equip, and empower women to see this truth realized in their own lives.”

Tweet This: “The truth is, women are strong and capable of both achieving their educational and career goals and becoming excellent mothers”

The Dobbs case concerns Mississippi’s “Gestational Age Act,” which prohibits abortion after the 15th week of pregnancy with some exceptions. The case hinges on the constitutionality of limits on abortion before viability. Dobbs “could upend the Supreme Court’s landmark decisions in Roe v. Wade and Planned Parenthood v. Casey, in which the court ruled that the Constitution protects the right to have an abortion before a fetus becomes viable,” according to SCOTUSblog.

The 1973 Roe v. Wade decision established a right to abortion throughout pregnancy in the U.S., and the 1992 Planned Parenthood v. Casey ruling purported to uphold the Roe decision, though it did away with Roe’s reasoning and the standard of review, the method the Court uses to determine whether an abortion-related law is constitutional.

The Charlotte Lozier Institute (CLI) recently released analysis of European abortion law showing that the overwhelming majority of European countries (47 out of 50) limit elective abortion before 15 weeks gestation – illustrating how the Mississippi “Gestational Age Act” is consistent with the laws of other nations. No European nation allows elective abortion through all nine months of pregnancy, the report said, and yet currently no U.S. state has an enforceable limit on abortion at 15 weeks.

Heartbeat International’s network consists of pregnancy help medical clinics and resource centers, non-profit adoption agencies and maternity homes, with nearly 3,000 affiliated pregnancy help locations in more than 65 countries worldwide, and more than 1,500 of those organizations in the U.S.

Estimates vary on the total number of pregnancy help organizations in the U.S., whether affiliated with national networks or not, with low-end figures between 2,500 and 3,000.

“Since Roe and Casey, a network of effective pregnancy help has grown tremendously in both size and sophistication,” said White. “These organizations, which outnumber abortion clinics 3:1, have offered millions of women local, individualized assistance.”

Tweet This: “Since Roe and Casey, a network of effective pregnancy help has grown tremendously in both size and sophistication”

“Women don’t need abortions to ‘participate in the social and economic life of the nation’ as Casey puts it,” White told Pregnancy Help News.

“The idea that motherhood and success are incompatible is both horribly outdated and utterly untrue,” she said, “but this idea has caused the Court to cling to Roe v. Wade and Planned Parenthood v. Casey, even though those cases were wrongly decided.”

PHOs comprise a significant safety net for women and families facing unexpected pregnancy in the U.S., as evidenced in the most recent Charlotte Lozier report on pregnancy help centers in the U.S.

“We empower women struggling with an unplanned pregnancy,” said Dr. Brent Boles, medical director for Heartbeat International. “We empower them with the truth undergirded by our willingness to assist them and their families in real and tangible ways.”

“The pregnancy help network has expanded not only in size but also in scope and sophistication,” Heartbeat tells the Court. “Pregnancy help organizations today are supported by Heartbeat and several other professional, non-profit umbrella organizations, including Care Net, Birthright International, and the National Institute of Family and Life Advocates.

“The pregnancy help network has grown from a fledgling, loose community in the days in which Roe and Casey were decided, to an established, vast, well-organized, and professional network that spans the country,” the brief states.

Several other pro-life organizations have filed briefs for Dobbs as well, as have more than 200 members of Congress, a group of U.S. state governors and dozens of state lawmakers. And the state’s first female attorney general, Lynn Fitch, filed a brief in the case last week arguing for overturning Roe and Casey, and that the state could prevent elective abortions before viability because “nothing in constitutional text, structure, history, or tradition supports a right to abortion.”

The Casey ruling, “relied on an incorrect and outdated dichotomy that women facing unexpected pregnancies can either fully participate in society or become mothers, but not both,” Heartbeat’s brief states, and Heartbeat is “uniquely positioned to provide relevant factual background and legal argument” on the legal precedent at play because of the extent and scope of its work.

Technological and societal advances, changing social mores concerning children born out of wedlock and their mothers, adoption, and safe haven laws, along with the proliferation of pregnancy help organizations and the vast support they provide all mean the situation is very different from when Casey was decided.

Heartbeat’s amicus brief provides the individual testaments of Nikki Pinkley, Brittni Curl and Michelle Bisbee, showing how they were assisted by pregnancy help organizations as example that women do not have to choose between the life of their unborn child and taking part in society.

Additional members of Heartbeat International leadership observed the need for the Supreme Court to recognize that women are strong, that they do not need abortion, and pregnancy help is available.

“It is now time for SCOTUS to recognize that women are stronger than the obstacles that try to force them into unwanted abortions,” said Jor-El Godsey, president of Heartbeat International. “This is what the grassroots pregnancy help movement has known all along.”

Tweet This: “It is now time for SCOTUS to recognize that women are stronger than the obstacles that try to force them into unwanted abortions”

“Since the Roe and Casey SCOTUS decisions our pregnancy help network has grown in the number of organizations as well as their service offerings,” said Betty McDowell, Heartbeat’s vice president of Ministry Services. “We understand women and their needs.”

“We are all about empowering women to make healthy life choices and now is the time to review these Supreme Court decisions which have actually hindered women from reaching their full potential,” she said. “Thankfully as our movement has grown, we now outnumber abortion clinics 3:1 bringing hope to women, families and communities.”

Boles detected the presence of misogyny in the argument that women need abortion.

“Abortion says that women will not be capable of being as smart as men, as well educated as men, as wealthy as men, or as successful as men unless they have access to abortion services,” Boles told Pregnancy Help News.

“The pro-life movement isn’t made up of men who want to control and oppress women,” he said. “It is made up of a diverse group of people over a broad range of ages and across an ethnically diverse background who are united in their love for women and children - and it is past time for America to celebrate the work of these centers - and to see the true nature of abortion. “

“Roe and Casey stand on a lie,” White added. “But pregnancy help organizations live the truth every day in their communities. Heartbeat urges the Court to overturn Roe and Casey.”

Tweet This: "Pregnancy help organizations live the truth every day in their communities. Heartbeat urges the Court to overturn Roe and Casey."