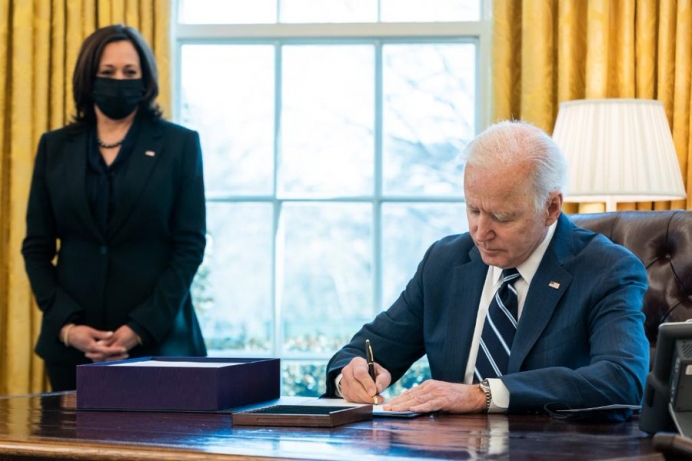 (Life News) Joe Biden today (Mar. 11) signed the so-called COVID relief bill that is the greatest expansion of abortion in a decade. Although he claims to be a “devout Catholic,” Biden just signed a bill that forces Americans to fund abortions and the Planned Parenthood abortion business. It is the largest expansion of abortion funding since 2010, when Democrats passed Obamacare.

The COVID relief bill that spends all but 9% on COVID relief and will spend tens of millions, perhaps over $100 million on funding abortions and the Planned Parenthood abortion corporation.

In the Senate, Democrats defeated a pro-life amendment that would have stopped the COVID relief bill from using tens of millions and perhaps hundreds of millions of dollars to fund killing babies in abortions. Democrat Senators Joe Manchin and Bob Casey, who both claim to be pro-life, voted for the abortion-funding legislation after the amendment was defeated.

The Senate voted 52-47 to defeat the pro-life amendment offered by Senator James Lankford of Oklahoma to apply the Hyde Amendment to the COVID bill. Every Republican voted for the amendment along with Democrat senators Bob Casey of Pennsylvania, Tim Kaine of Virginia, and Joe Manchin of West Virginia. Senator Sullivan of Alaska did not vote. despite voting for the amendemnt to stop abortion funding, Casey and Manchin eventually voted for the abortion-funding bill.

The amendment failed because it did not reach the 60-vote threshold needed to waive budget rules associated with the legislation. Without the 3/5 majority necessary, the amendment fails and the COVID bill will fund abortions.

Yesterday, the nation’s Catholic bishops slammed Democrats for passing the bill without any protections against abortion funding.

It is “unconscionable” that Congress passed the bill “without critical protections needed to ensure that billions of taxpayer dollars are used for life-affirming health care and not for abortion,” wrote the bishops in a statement.

The policy was needed, they continued, “because this bill includes many general references to healthcare that, absent the express exclusion of abortion, have consistently been interpreted by federal courts not only to allow, but to compel, the provision of abortion without meaningful limit.”

“The many important, life-saving provisions in the American Rescue Plan Act have been undermined because it facilitates and funds the destruction of life, which is antithetical to its aim of protecting the most vulnerable Americans in a time of crisis,” they state.

Tweet This: “The [] American Rescue Plan Act [] facilitates and funds the destruction of life .. which is antithetical to its aim ..”

The $350 billion state bailout funds are particularly problematic as the bill doesn’t prevent states and localities from using taxpayer funds to pay for abortions. Under the current guidelines, liberal states like New York and California, which are likely going to receive the lion’s share of the bailout, can funnel millions to abortion giants like Planned Parenthood if they choose.

The Family Research Council released a lengthy analysis of the funds in the bill that could be used to pay for abortions:

The pro-life group SBA List wrote to senators ahead of the Senate vote urging them to adopt pro-life amendments to curb abortion funding.

“While prior bipartisan COVID relief packages have included Hyde protections on funding streams that fall outside of existing limits on abortion funding, this bill departs from the status quo by leaving funds open to use for abortion. COVID relief money should be used for life-affirming purposes… we strongly support and will score in favor of amendments to mitigate the funding of abortion, abortion coverage, or abortion providers,” it wrote.

SBA List President Marjorie Dannenfelser added: “Pro-abortion forces emboldened by Joe Biden and Kamala Harris are shamelessly exploiting the COVID-19 crisis to expand abortion on demand, paid for by taxpayers. By failing to include Hyde Amendment protections and forcing taxpayers to bail out the abortion industry, their so-called ‘rescue plan’ abandons some of the most vulnerable Americans – unborn children and their mothers. Their agenda will divide, rather than unite our nation as this administration promised.”

“The current COVID-19 relief package has the potential to be the largest expansion of abortion funding since Obamacare. Less than 10% of the ‘relief’ actually goes towards combatting the pandemic. Instead, pro-abortion politicians are using this bill to open the floodgates to abortion funding, with billions of dollars unprotected from being used for the life-ending practice both here in the U.S. and abroad. This is radically out of step with the majority of Americans who oppose their tax dollars funding it. Americans who have been suffering from the effects of the pandemic deserve authentic relief, not this pro-abortion bonanza,” he said.

Fortunately one of the abortion funding provisions was removed from the bill prior the Senate vote.

Senator Rand Paul has forced Democrats to remove a pro-abortion provision in their massive $1.9 trillion COVID bill that would have allowed every Planned Parenthood across America to receive free money through the Paycheck Protection Program. Last year, the Planned Parenthood abortion business improperly applied for and received $80 million in federal funds meant to support small businesses as they battle the economic fallout from the coronavirus.

Shockingly, only 9% of the bill’s funding will go to public health issues, and almost half of the funding, not including the proposed stimulus checks, won’t be distributed until 2022 at the earliest.