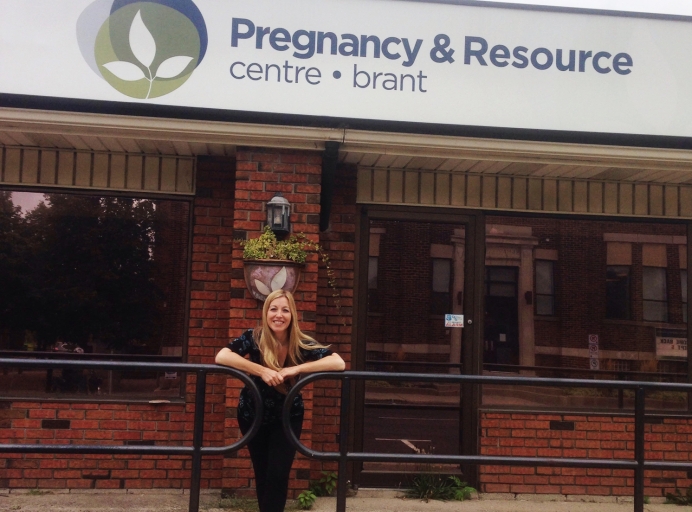 When Julie Bonany was 14 and pregnant, she couldn’t envision the amazing pathway she’d travel during the next quarter-century.

And yet, as an emerging leader in Ontario, Canada’s pregnancy help community, few things could have prepared her more appropriately than the road she’s taken.

“I was raised in a really good, loving home, and I would fight on the pro-life side—until I got pregnant,” Bonany said. “I became convinced I couldn’t do it, couldn’t continue the pregnancy, so I aborted.”

Having grown up in the church, Bonany began to question her faith at an early age and by 11 years old, she was acting out in self-destructive ways. When she became pregnant at 14, Bonany’s boyfriend and her own father pushed her to have an abortion.

“My mother didn’t know what to do—she was between a rock and a hard place, not believing in abortion but having her 14-year-old daughter pregnant,” Bonany said. “I listened to all the crazy thoughts, believing the words of the Enemy.”

After she took the only option presented to her and aborted her first child, Bonany found herself right back in the same situation a year later. She didn’t want to go through another abortion, but the condemning, doubt-filled thoughts returned to Bonany with a vengeance, filling her with what she remembers as, “an overwhelming sense of despair.”

While her mother had wanted to step up and help her daughter embrace life the first time around, this time, she asserted herself and gave Bonany a lifeline she didn’t have during her first pregnancy.

“Mom was fighting for the life of that baby,” Bonany said.

At her mother’s encouragement, Bonany found the courage to speak to her youth pastor. That conversation would prove to be the beginning point for a light shining amidst the darkness for Bonany.

“The look of love and acceptance on his face still impacts me today,” she said.

Her youth pastor and his wife took her into their home. She didn’t want other people knowing about the pregnancy, so she took correspondence classes to keep up with her education and removed herself from her previous everyday life.

The pastor’s family included two adopted children, and the couple helped Bonany chose one of the adoption agencies they had used to make an adoption plan for her own child, who turns 25 years old this year.

Eventually, Bonany finished school, got married, and welcomed children with her husband. As her family grew and her life got on track, Bonany held a special place in her heart for the kindness and strength of her youth pastor and his wife, which had given her the courage to choose life.

Having gone through two pregnancies as a teen—and seeing the effects of both decisions she made—Bonany’s passion to serve others eventually led her to get involved with local pregnancy help efforts.

“When my kids became older, I had more freedom,” she said. “I’ve always had a heart for pregnancy centers. If there had been one in or near my community, things might have turned out differently.”

About three years ago, Bonany got involved at Pregnancy & Resource Centre - Brant in Brantford, Ontario, starting out by participating in the abortion recovery program before joining the staff as a client advocate. In January, the center’s executive director, Cathy Birnie, took Bonany by surprise, asking her to consider taking over the organization once she retired.

In addition to the post-abortion recovery program Bonany went through as a client, the center serves women with pregnancy tests, options counseling, one-on-one client advocacy support and parenting education.

Currently serving as associate director, Bonany is learning more about the role she will eventually fill when Birnie steps aside.

In addition to working at the pregnancy center, Bonany and her husband keep a spare room available to help young women in need. So far, they’ve used their home to house teen moms, young women leaving abusive situations and even missionaries looking for a temporary rest.

“We’re paying it forward,” Bonany said. “We’ve always had a passion for shepherding.”

As she serves women through the center, Bonany often shares her own story with young women facing the same kinds of obstacles she encountered as a pregnant teenager. As she looks back upon her own physical, emotional, and spiritual life, Bonany knows from where her help and strength have come.

“I couldn’t have done it without the Lord, I couldn’t work at a pregnancy center without him either,” she said. “It’s been an incredible journey.”