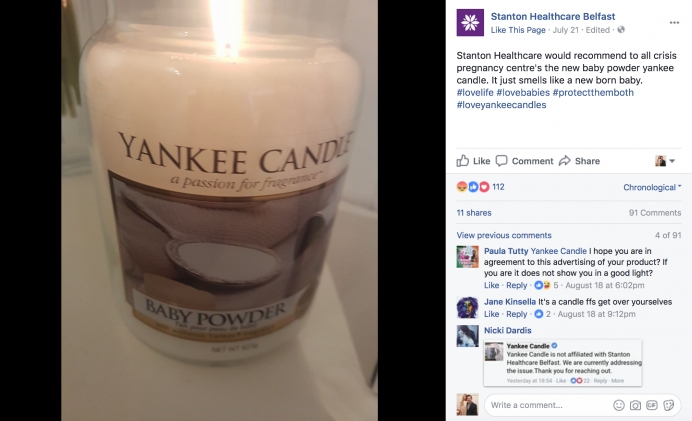 In an apparent attempt to cash in all remaining credibility, pro-abortion warriors are reporting breathlessly on what may be the most absurdly non-newsworthy story of the week: a Facebook post about candles.

That’s right, “Candlegate” is upon us. Run for your lives.

Credit—or blame—for “breaking” the “news” goes to Broadly, which ran a story on its website Tuesday claiming that Stanton Healthcare’s Belfast, Ireland location was in “hot water” for posting a picture of baby-powder scented Yankee Candles to its Facebook page. 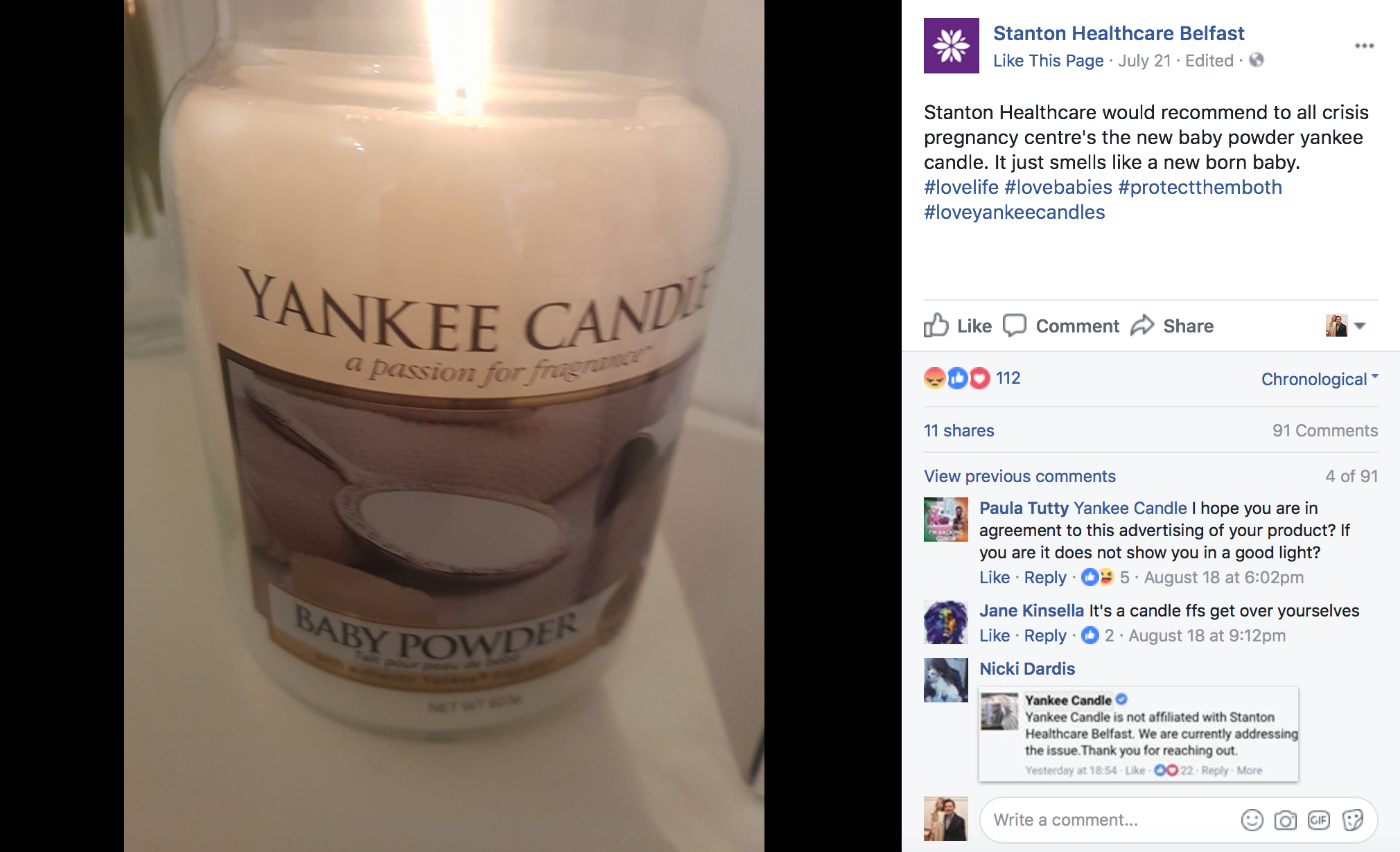 Shocked that a pregnancy center that serves—well—pregnant women, would dare light a candle that smelled like a baby and then have the nerve to encourage others to do likewise, Broadly was able to connect with The British Pregnancy Advisory Service (BPAS), a pro-abortion group that has made a habit of demonizing Stanton Healthcare and other alternatives to abortion in Ireland.

"Not only is this a rather cruel attempt to manipulate women who may be in incredibly desperate circumstances, it is also profoundly patronizing," BPAS spokesperson Katherine O'Brien told Broadly. "The majority of women who have an abortion are already mothers—they know perfectly well how a newborn baby smells, and the idea that any woman could be convinced to have a child by the mere presence of a scented candle is just insulting."

Of course, no sane reading of the Facebook post even remotely allows for the idea that the candles will somehow magically "manipulate" a woman into choosing life, but O'Brien's statement is also patently false on another, far deeper level: Every woman, not just "the majority," who resorts to abortion is already a mother. That's what pregnancy is. That this escapes the attention of a woman speaking for a so-called "pregnancy advisory" group is just as telling as the tortured rendering of the Facebook post itself.

The feigned outrage even drew an official statement from Yankee Candle, distancing itself from Stanton Healthcare, lest faux-journalists get the wrong impression via a Facebook post featuring one of their products.

"Yankee Candle is not affiliated with Stanton Healthcare Belfast. We are currently addressing the issue," the company told Broadly.

Brandi Swindell, who founded Stanton Healthcare in 2006, said her team had yet to hear directly from Yankee Candle as of Wednesday afternoon.

"It's probably conservative grandmothers and pro-life pregnancy centers who buy most of their candles," Swindell laughed. "If we weren't dealing with abortion here, this would be one of the funniest things I've ever heard."

With its sights set on replacing Planned Parenthood as the go-to provider of women’s health, Stanton Healthcare has six locations in the U.S., plus the center in Belfast. The organization is named after suffragette Elizabeth Cady Stanton, who, like her contemporaries including Susan B. Anthony, opposed abortion and referred to it as “child murder.”

Stanton Healthcare’s Belfast location—the group's first non-U.S. site—has been a lightning rod of controversy in recent years, as abortion promoters have fought to legalize the lethal procedure in Ireland. Abortion is currently illegal under the Eighth Amendment of Ireland’s constitution, which recognizes the equal right to life for both mothers and unborn children. Abortion activists have engaged in a pitched battle to overturn the law for the past three years.

Stanton Healthcare’s Belfast location and other pro-life centers in the nation have been accused of lying to women as part of the campaign, which has enlisted the likes of film star Liam Neeson and late-night comic James Corden.

"We have it bad enough in America, but Europe has become so secular, and the battle that they face in Belfast is just so snarky, but they've done a great job of dealing with that," Swindell said. "The Belfast center is beautiful and it's professional, and it's truly helping women. It's the exact model and approach we want, where women get the quality healthcare they deserve."

Stateside, Stanton Healthcare is fighting a lawsuit filed by Planned Parenthood, which complained that Stanton’s mobile medical unit was serving women in a parking lot shared by both organizations.

The latest kerfuffle, Stanton said, is a perfect indicator of just how motivated and unhinged the abortion lobby is becoming. It also provides those who identify themselves as pro-choice to get a glimpse into the revved-up mindset of abortion absolutists.

"It shows that they really don't care about women," Swindell said. "When they're willing to stoop to the level of diminishing our work because of a candle, it shows they'll stop at nothing to fight the work of pregnancy care centers and life-affirming women's medical clinics—not because they care about women, but because they truly hate us and they can't stand any other options or choice for women other than abortion."