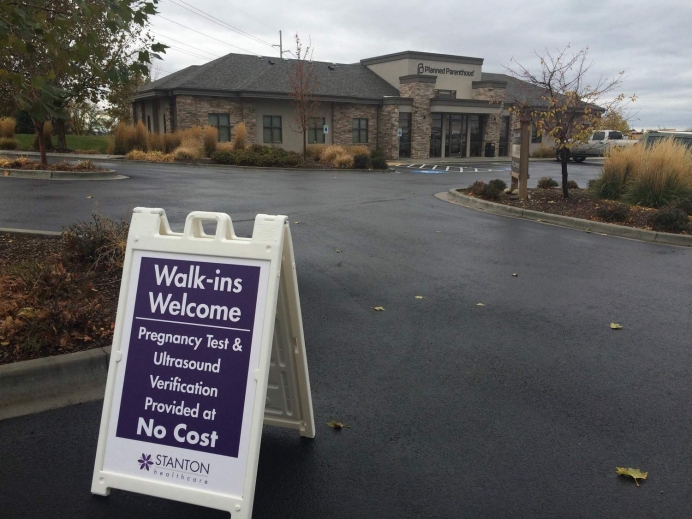 As she drove by A Preferred Women’s Health Center on her way into work Friday morning, Tonya Baker Nelson noticed what she sees too many mornings: a parking lot full of cars—every one of them representing a woman ending her child’s life through abortion at the Raleigh, N.C., clinic.

Right next door to the clinic stands the house Baker Nelson’s pro-life pregnancy help organization purchased a year ago in hopes of offering each of those women one last chance to save her child’s life from abortion.

A year into a protracted battle to rezone the residence into a life-saving outpost, Baker Nelson will need to clear one more hurdle after the abortion business filed a complaint with the city three days after Christmas in a last-ditch effort to stop the pro-life site from opening.

It’s a story that sounds eerily similar to Brandi Swindell, the founder and CEO of Stanton Healthcare, whose relocation effort next to a Planned Parenthood mega-center in Meridian, Idaho prompted the abortion giant’s Great Northwest and the Hawaiian Islands regional affiliate to file a suit against the pro-life nonprofit in November.

In Swindell and Stanton Healthcare’s case, Planned Parenthood is threatening a minimum of $10,000 in lawyer’s fees should it win the lawsuit against its pro-life neighbor.

So much for “choice,” says Swindell.

“This really exposes that Planned Parenthood and the abortion industry don’t care about women, and they don’t really believe in choice,” Swindell said. “I think Planned Parenthood is recognizing that our movement is a movement of hope and compassion and quality healthcare, and the women are coming to us. I think suing us is going to backfire on Planned Parenthood here.”

Baker Nelson, meanwhile, will need to face her accusers in a hearing set for Feb. 13 to keep her plans of offering life-affirming care next door to her local abortion business.

Having resisted pressure to abort her daughter in her early 20’s, Baker Nelson knows first-hand the power of true choice in an unexpected pregnancy.

“We want to be in our space, we want to be saving the babies,” she said. “The parking lot is slammed full and we own that property, and it would be so easy for [an abortion-vulnerable woman] to walk right next door if that’s what she wanted to do.”

Baker Nelson’s organization, A Hand of Hope Pregnancy Resource Center, has been renting space for one of its two pregnancy centers across the street from A Preferred Women’s Health Center since 2012. When the house next to the abortion business went up for sale in late 2015, she jumped at the opportunity.

Since the city had already announced plans that would allow the house to be remodeled and rezoned as an office building, Baker Nelson and her board of directors went ahead with the purchase, closing in early 2016.

Baker Nelson began to run into opposition in late April, however, and her request for rezoning was eventually rejected by the city council in early July. Only after A Hand of Hope filed a federal lawsuit in August did the city change its stance and allow the non-profit to move ahead with its plans to use its own property.

Finally, Baker Nelson and her organization got a green light from a city zoning committee in early November. Over a month later—far beyond a 10-day deadline to appeal the committee’s decision—the abortion clinic filed its last-ditch attempt to stop A Hand of Hope from moving next door with a Dec. 28 appeal.

Tweet This: #prolife centers in 2 states dealing with complaints from #PPAct & Co. #DefundPP

The appeal calls into question A Hand of Hope’s legitimacy as a healthcare provider and accuses them of harassing clients at the abortion clinic—both of which are already enforceable by current statutes and regulations—and demands that A Hand of Hope refuse to advertise itself as a pregnancy center.

Almost comically, the complaint ends by making the following demand:

If the Hand of Hope organization is prohibited from both providing and/or performing medical testing at their property and impeding clinic access, we would welcome and support their ministry in our neighborhood.

“We’re ready for the fight,” Baker Nelson said. “It really does feel like a David and Goliath kind of battle, but the thing about it is, when David went to meet Goliath, he ran. I just cannot wait to get there.”

Why Not Call the Police?

More than 2,400 miles away, Swindell and Stanton Healthcare have a target on their back from Planned Parenthood, which opened its Meridian, Idaho abortion business in 2013.

Just a matter of months after Planned Parenthood opened, Swindell and the Stanton Healthcare board celebrated the purchase of two lots on either side of the abortion clinic—one of which they just recently sold to a local church.

Though they won’t break ground on the property until early this spring, Stanton Healthcare has parked its mobile medical unit in the parking lot shared by the two organizations, offering free ultrasounds, pregnancy testing, material assistance.

As it turns out, parking a mobile medical unit in a parking lot was a bridge too far for Planned Parenthood, which filed its lawsuit Nov. 22, arguing primarily that Stanton Healthcare’s use of the parking lot violates the approved uses clause in the business park where both organizations are located.

Pointing out that every one of the actions in the above statement, if true, would lead to criminal charges rather than a civil lawsuit, Swindell said unfounded charges like these betray Planned Parenthood’s intent to intimidate her organization.

“Why weren’t the police called on the spot?” Swindell asked. “Planned Parenthood calls the police all the time on people just walking across the parking lot. It’s weird that there hasn’t been a case where they called somebody because they were blocked in their car. I would call the police, you know what I mean?

“When Planned Parenthood starts suing peaceful pregnancy health clinics, people who aren’t even pro-life look at it and go, ‘Okay, this is too far. Women should have the option to choose something other than abortion, and these other centers are just helping.’”