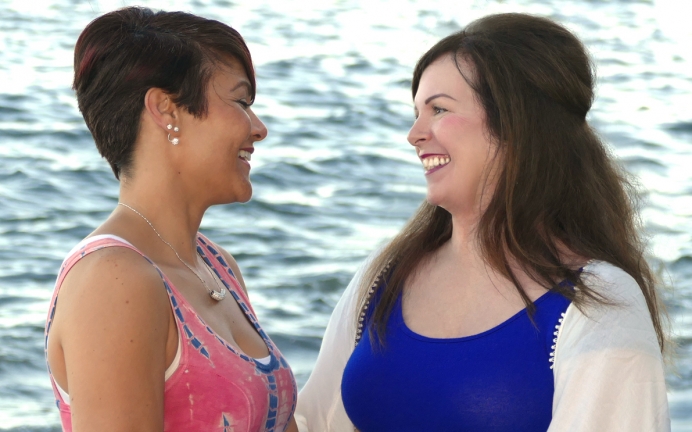 Laurie Gaines (right) chose life for her daughter, Arica, and that "choice" changed the course of her life. Photo Courtesy: Laurie Gaines

Once a Teen Mom, This Woman is Helping Others "Silence the Noise" to Choose Life

Her daughter’s 40th birthday marked a significant milestone for Laurie Gaines, a photographer, pregnancy center advocate, pro-life-missionary and author-in-the-making based in Fairfield, Calif.

Now a volunteer at Alpha Pregnancy Clinic—which serves women in three locations east of the San Francisco Bay Area—Gaines draws upon her experiences to serve others.

“When the girls come into the center, I can identify with them immediately,” she said. “Then they can see me now at this stage, and that gives them a lot of hope. I'm definitely not a broken human being just because I was a teen mom.”

However, Gaines well knows the varied reactions her clients’ pregnancies may evoke. Her own parents responded with love and support, consistent with their lifelong commitment to pro-life service.

While many women facing an unexpected pregnancy don’t have the same type of support Gaines received from her parents, she knows firsthand the fear her clients are working through.

“They parented by grace,” she said. “When the fear was out of it, the crisis was out of it. My parents had a beautiful way of getting through life and silencing the noise.”

Noise took many forms for Gaines. It clamored through her unhealthy relationship, and hissed through the scorn of a society uneasy with both single parenting and the newly minted Roe v. Wade decision. But nowhere did it thunder louder than at her parochial school.

Labelling her “a bad influence,” the school board was moving toward expelling Gaines when she was called into an administrator’s office.

“I remember telling her, ‘This is when I need you,’” Gaines said. “‘I'm 15 and I'm pregnant. I know abortion's wrong; I know sex outside marriage is wrong. But now I'm pregnant and the focus shifts. What’s right and loving now?”

The administrator silently rolled backward in her desk chair, ending the conversation.

Fifteen years later, after hearing Arica sing, “Amazing Grace” at her grandfather’s funeral, the administrator apologized to Gaines for her response at that pivotal moment.

In light of that memory, Gaines tries to bring some much-needed perspective into the lives of the clients she serves day in and day out.

“You've got to give people grace for their first reaction,” Gaines said. “That's not their final word. It's so important not to get caught up in all the offense, but just totally live life.”

As she helps women picture their new life as a mother, Gaines makes the most of her center’s mobile ultrasound unit, which Alpha introduced in 2009.

Giving a mother the chance to meet her child via ultrasound is a gift Gaines never takes for granted.

Championing Life Outside the Pregnancy Center

Building on those presentations, Gaines also created a similar program, “Come Alive,” which she has taken to thousands of high school students in the Philippines through her church’s mission work there. Among those students, she discovered a population of young women facing scorn and stigmatization with no one to provide support and “silence the noise” for them.

“In the Philippines you don't get to continue your education once you're pregnant,” Gaines said. “It's almost like sentencing you and your child to poverty. Now I'm trying to open a high school for pregnant girls.”

To that end, she and her daughter filmed interviews with a dozen teens in their local California schools’ Young Parents program, sending the videos and a petition to top leaders in the Filipino government to try and bring educational resources to unwed mothers in the Philippines.

She also has her eye on a little orange house on the Filipino island of Bohol, which she would love to turn into a pregnancy center and maternity home—adding to the nation’s existing pro-life options for women facing unexpected pregnancies.

Tweet This: Rejecting #abortion changed her life, now she's helping others do the same @kinglewrites #Prolife

Meanwhile, Gaines has written a book, entitled Choose Zoe, which was prompted by three encounters with pregnant 12-year-old girls in the space of a single month. Encouraged by her former executive director and mentor, the late Deidre Eckle, Gaines wove together all she has been learning about embracing life in any circumstance.

“Zoe is that abundant life Jesus died to give us in John 10:10,” Gaines said. “The book is very story-driven. There are brave, beautiful people that grace the pages, turning their vulnerability into benefit for others. I've connected choosing life with God to choosing life in the womb.”

The stories in Choose Zoe introduce readers to a range of life-affirming services, from adoption to abortion recovery programs such as A Movement of Love—a group and program hosted by Liberty Church of Fairfield.

Gaines wrote the book, which is slated for release in 2018, for pastors, pregnancy centers, families—anyone seeking ways to offer (or find) abundant life in the circumstances around challenging pregnancies.

“I'm really excited about where the pro-life movement is going and the opportunities we have to overcome evil with good,” Gaines said. “How can we choose zoe in the midst of a fallen, broken world? Hold onto hope, and embrace life one person at a time.”