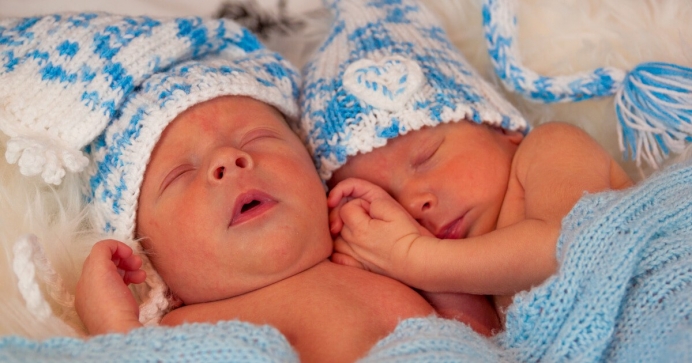 (Right to Life UK)  Premature twins, Finn and Zack Bishop, are now flourishing at home after being born at 28 weeks, and just one day after doctors advised their parents to have an abortion.

At 24 weeks, mother Caroline Bishop underwent pioneering surgery to correct a condition which was causing an uneven blood flow between the babies, meaning Zack received more nutrients than Finn.

During the otherwise successful surgery, Zack suffered with a bleed in the brain.

He was later diagnosed with periventricular leukomalacia, a type of brain injury common in babies who have had a bleed in the brain. The severity of the condition can cause minimal issues in some children and disability in others.

However, doctors warned Caroline and her husband Matt that Zack may never walk or talk and advised them to consider a termination at 28 weeks.

Caroline revealed she was “devastated” and “began to consider a termination” based on the advice of medics.

However, the next day her waters broke and the twins were delivered by caesarean section at 28 weeks and two days.

Both babies were taken to the neonatal intensive care unit at Lister Hospital in Stevenage, Herts so they could be monitored.

Shortly after, Caroline and Matt were rushed to the unit to say goodbye to Zack.

“I was rushed in my hospital bed to the unit as they thought we were going to lose him,” Caroline revealed to the Metro.

“But he was saved by my cuddle, I was sobbing whilst holding him on my chest – he was completely still but then he moved a couple of times and after a while he was placed back in the incubator.

“A few days later, Finn caught sepsis. He was flopped and pale but thankfully he was pumped with antibiotics and saved.”

Both Finn and Zack began to recover, and their mother knew, from then on, they’d survive.

Now a year old, both babies are flourishing at home with their older brother Sam, six.

Zack is disabled, but is now starting to reach “mini-milestones” his mother said.

Not only that, but he has defied the odds and doctors’ expectations to learn how to walk and talk with the help of his twin.

Finn and Zack love hearing stories side-by-side and high-fiving at the dinner table, their Caroline shared.

“The twins have such a sweet bond, they often hold hands in the buggy or wake one another up to have a babble at 5am.

“They always share food and laugh at each other which is great fun to watch. They are always smiling at one another and even at their young age – sharing their toys.

“I was terrified when I found out it was twins at the nine-week scan – I was worried because my older son, Sam was born at 34 weeks.

“I could just about cope with one child never mind three but now I couldn’t imagine my life without them.

“At the start it was all very worrying and scary – but now, it is so different. I love Zack for the child he is and his disability doesn’t matter anymore. We will face the challenges together.”

The twins are already showing their individual personalities at just a year old, with their mum describing Finn as a “little pickle who is into everything” while Zack is “laid-back and sweet”.

She added: “It is amazing having them both together and now I treasure every special moment.”

Tweet This: “It is amazing having them both together and now I treasure every special moment” - UK Mom of premature twins who was advised to abort