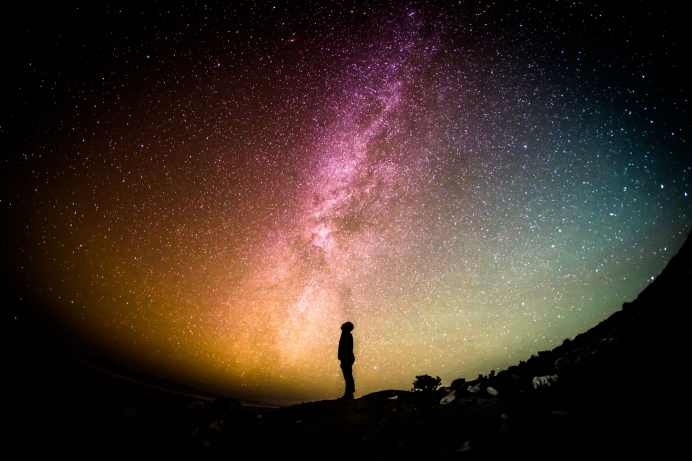 How the Pro-Life Movement Is Winning an Invisible Cosmic Battle

“Sandy” is the director of a pregnancy help center in a small town. She doesn’t have a huge staff, so she wears lots of hats: meeting with donors, counseling clients, answering the phone.

Sandy works hard and believes in the sanctity of human life. What she doesn’t realize is how much of a key player she is in an epic, cosmic battle—a war that rages over hearts and minds in her community, nation, and world on a daily basis.

Maybe you’re like Sandy. Maybe you need to be reminded of the vital nature of your work.

Let’s look at the battle for life through a wide-angle lens.

As pro-life people, we are painfully cognizant of how our culture devalues preborn people. We understand the right to be born is the most fundamental human right. We understand God created mankind in His image, and He forbids the taking of innocent human life.

That said, the strength of our position will solidify even more if we take a step back to look at the big-picture, over-arching truth which goes along with a pro-life conviction.

God has never been needy, lonely, or unhappy. He is one Being with three Persons. He has angels to serve him.

God already had relationships before He created us, but He wanted to share His eternal joy with a special creature who is uniquely like Him—a creature to love who could love Him in return.

So He created mankind in His image.

At first, everything was perfect. Adam and Eve enjoyed fellowship with their Father/Creator, with each other, and with the other creatures.

However, by the third chapter of God’s story, another player enters the picture. Satan is jealous of God and hates Him.

How do you pierce a Father’s heart? You attack His children.

Satan successfully tempts Eve and Adam to disobey God. And humanity has been in a freefall ever since.

Of course, the good news is God had a plan in mind from the beginning to rescue His children and restore His creation. Those who love and serve Jesus are being rescued, and one day He will restore our broken world as well (Rev. 21:5).

So how does the grand metanarrative of God’s story—and our part in it—apply to pro-life ministry?

God loves human beings. Satan hates God; therefore, Satan hates us. His objective is to sever our relationship with God and take us captive. He uses culture to infiltrate our minds.

When you consider the blatant lies our society has swallowed about human beings, you begin to appreciate why pro-life work is so difficult—and so important.

Tweet This: The #prolife movement serves as gatekeeper to the big-picture truth about humanity. @SusanneMaynes

We are gatekeepers to the truth about humankind.

Let’s put this in terms of the work done by pregnancy centers every day.

A distressed young woman comes into a pregnancy help clinic. She’s a product of our culture, so she’s already been indoctrinated in significant ways.

She’s been told that human beings are a random accident of evolution and there’s not really meaning or purpose to our lives. She believes humans are just a higher form of animal, and that animals are people, too.

She tells herself that she is worthy of love, but she would be hard-pressed to tell you on what basis she has value.

If asked about her identity, she’ll explain her sexual preferences (which don’t necessarily match her biology). In her mind, her sexual activity and feelings are who she is.

She’s terrified of being alone. Only losers don’t have a partner, and sex is everything—so she’s always in a relationship, still looking for the one who will “complete” her.

She believes in women’s rights, and that abortion is a choice—perhaps a heavy one, but a choice nonetheless. She sees children as a burden that could ruin her life as she knows it.

This woman is blind to the truth of “imago Dei,” for which the pro-life movement is a gatekeeper and first-responder.

She doesn’t yet realize she’s been created in the image of God, just a little lower than the angels, crowned with glory and honor. She doesn’t know she’s not just an animal, or that God himself has bestowed honor and dignity upon her.

She can’t see that her identity is “image-bearer of God,” not her sexual preferences—that her biology is a gift, not a troubling puzzle to figure out.

She doesn’t understand that her full value was given to her long before she was born; that God knew her name before she was conceived (Jeremiah 1:5) and started writing her story while He carefully formed her in her mother’s womb.

She doesn’t yet see that children are always a blessing, and that the “choice” our culture forces on women is something that never even entered God’s mind. She doesn’t realize that no matter how old or sick or hopeless she becomes, her value will never diminish one iota.

She doesn’t know the imago Dei truth about herself—and she certainly doesn’t know it about the child she carries.

Image-bearer. Planned by God. Beloved. Crowned with glory. Carefully fashioned with purpose. A meaningful story in the making. Worthy of honor, dignity, and protection. A blessing and a reward.

Here’s the beautiful thing: a young woman facing a pregnancy crisis may not know the truth about herself or her child before she enters the doors of a pregnancy help center—but once she does, everything changes.

Here she is loved and valued. Here she learns the truth about humanity. Here she’s invited into the grand story of God and His love for her and her child.

And when she chooses life, another round in the great cosmic battle is won.

Take heart. Your work matters more than you know. There’s an epic struggle going on in the invisible realm—and your daily efforts help win the war.