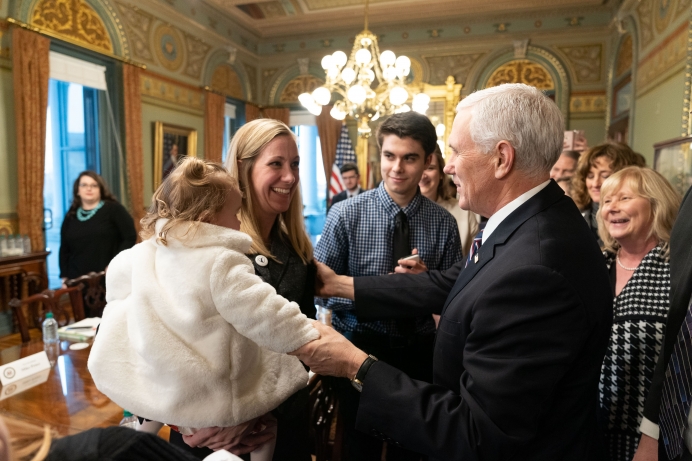 Elisa and her 1-year-old daughter Lissy talk with Vice President Mike Pence ahead of the March for Life. Official White House Photo by D. Myles Cullen*

When Elisa moved to Port Huron, Michigan with her infant daughter just over a year ago, she was undeniably overwhelmed. A newly single-parent, Elisa was leaving behind an abusive relationship and starting over fresh, just her and 5-month-old Lissy.

Although a self-described “strong, independent woman who is not one to ask for help,” Elisa was feeling immense pressure in her new life as a single parent in an unfamiliar environment.

“I’d been in business management for 15 years, so for me to ask for help was very difficult because I had worked for everything that I had up until that point,” she said. “And it wasn’t in me. My dad is very ‘dutch,’ so if you understand ‘dutch,’ you understand that you work for what you have.”

But without any friends or family nearby, Elisa knew she needed help.

“I reached out for help after realizing that raising a baby while also trying to complete school was a bit more than I could manage on my own at that given moment in my life,” she said.

That’s when she was referred to Blue Water Pregnancy Care Center.

She might not have been pregnant anymore, but the center still had a myriad of ways in which it would support her as a mother, eventually turning her into an advocate for the center and even landing her in a meeting with--of all people--the Vice President of the United States.

“My initial feelings of anxiety upon walking through the doors of the center quickly vanished as I took in the calm and inviting environment,” she said. “The staff and volunteers assisting me with my concerns exhibited nothing but sincere kindness, compassion and professionalism. My various interactions with staff made it evident to me that they had a true passion and dedication to their mission.”

Over the next several months, the center would serve as a sort of safe haven for Elisa, as she returned once a week to participate in its Earn While You Learn program, a well-known pregnancy center curriculum which offers moms and dads parenting classes, bible studies, and more in exchange for “baby bucks,” which can be used to purchase baby items like formula, diapers, car seats, and strollers.

Elisa quickly adopted a routine of attending the parenting classes and bible studies every Wednesday night. Soon, that routine transformed the center into a sort of “church” community for Elisa.

“Every person I made contact with, they just wanted to help, and they wanted me to see the joy in life and being a mother, and not to have those stresses,” she said. 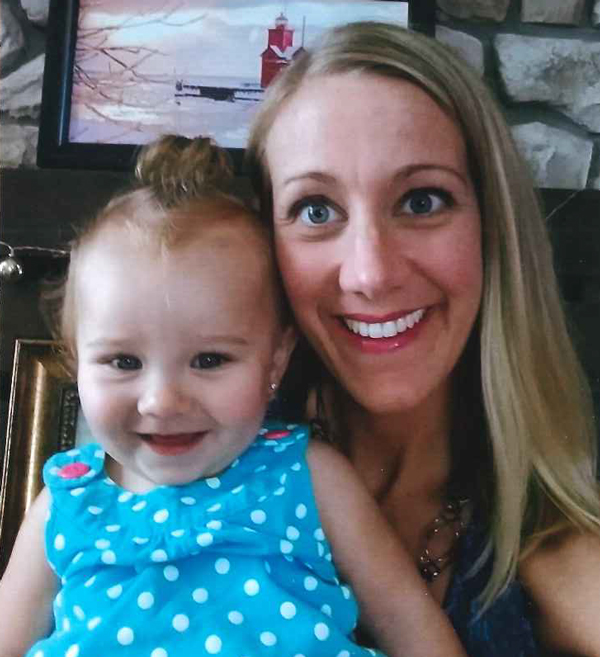 As a major bonus, Elisa was empowered to provide for her daughter in unimaginable ways.

“In addition to the knowledge and spiritual growth I have been able to obtain through participation in the program, I have earned an abundance of supplies for my daughter,” Elisa says. “Because of the assistance I have received from the center, I did not have to utilize other resources for childcare, and have managed to attend school full-time from home while raising my daughter.”

Tweet This: How One Woman’s Safe Haven Led Her to a Meeting with Vice President Mike Pence #prolife @VP

Today, Elisa is a passionate advocate for the center and is giving back. Not only does she watch the children of moms attending classes and bible studies at the center, but she also organized the center’s first Walk 4 Life last year.

And in her biggest advocacy yet, she and Lissy just flew to Washington, D.C. to share their story with their elected representatives and Vice President Mike Pence ahead of the March for Life. 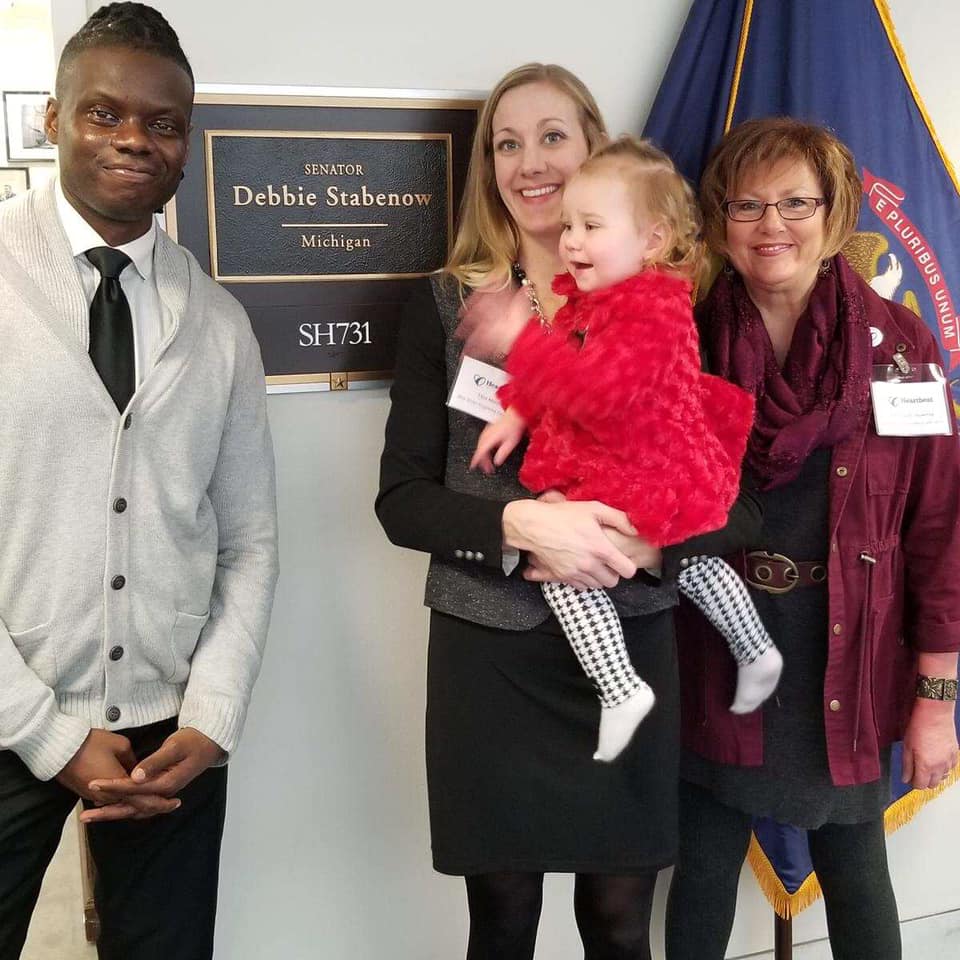 As a part of Heartbeat International’s Babies Go to Congress, Elisa, Lissy, and Kim Supan-Slowinski of Blue Water Pregnancy Care Center visited with congressional offices—including that of Democratic Senator Debbie Stabenow—before heading over to the Vice President’s office in the afternoon.

There, alongside three other Babies Go to Congress moms, Elisa told her story of relocation and empowerment, sharing how much a solitary pregnancy help center in Michigan has impacted her and her daughter’s lives.

“I am just one of countless women and men who have been helped in some way by the Blue Water Pregnancy Care Center,” Elisa said. “For those women and/or couples who are feeling scared as they are faced with the challenges ahead, the center can be a source of immeasurable support and comfort.”

“As much as I never thought I’d hear myself say this, I’m so grateful that I was put in that position to start over and (for) the people that God put in my life and the center,” Elisa said. “Because it’s just amazing what He has done and where He is taking us.” 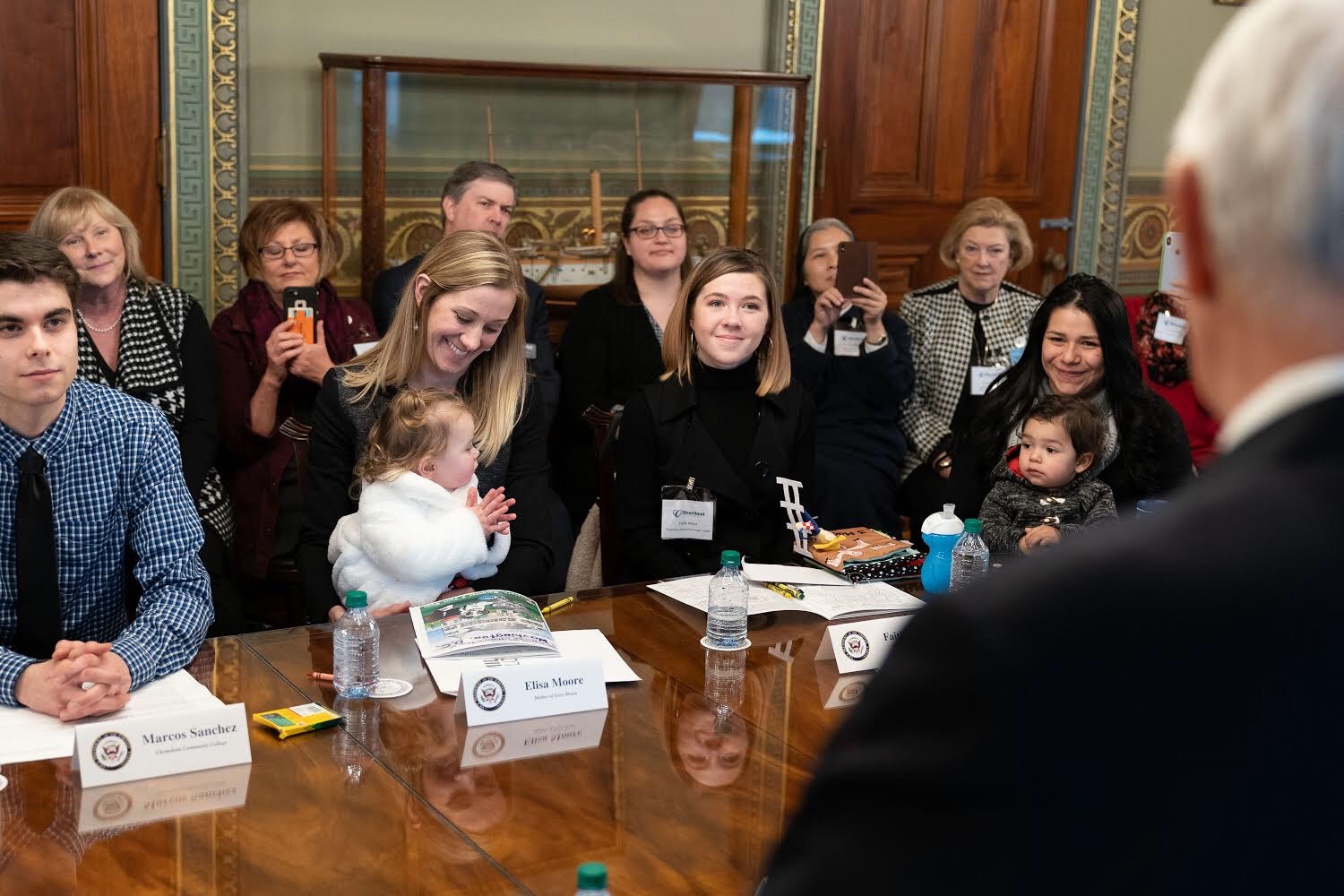 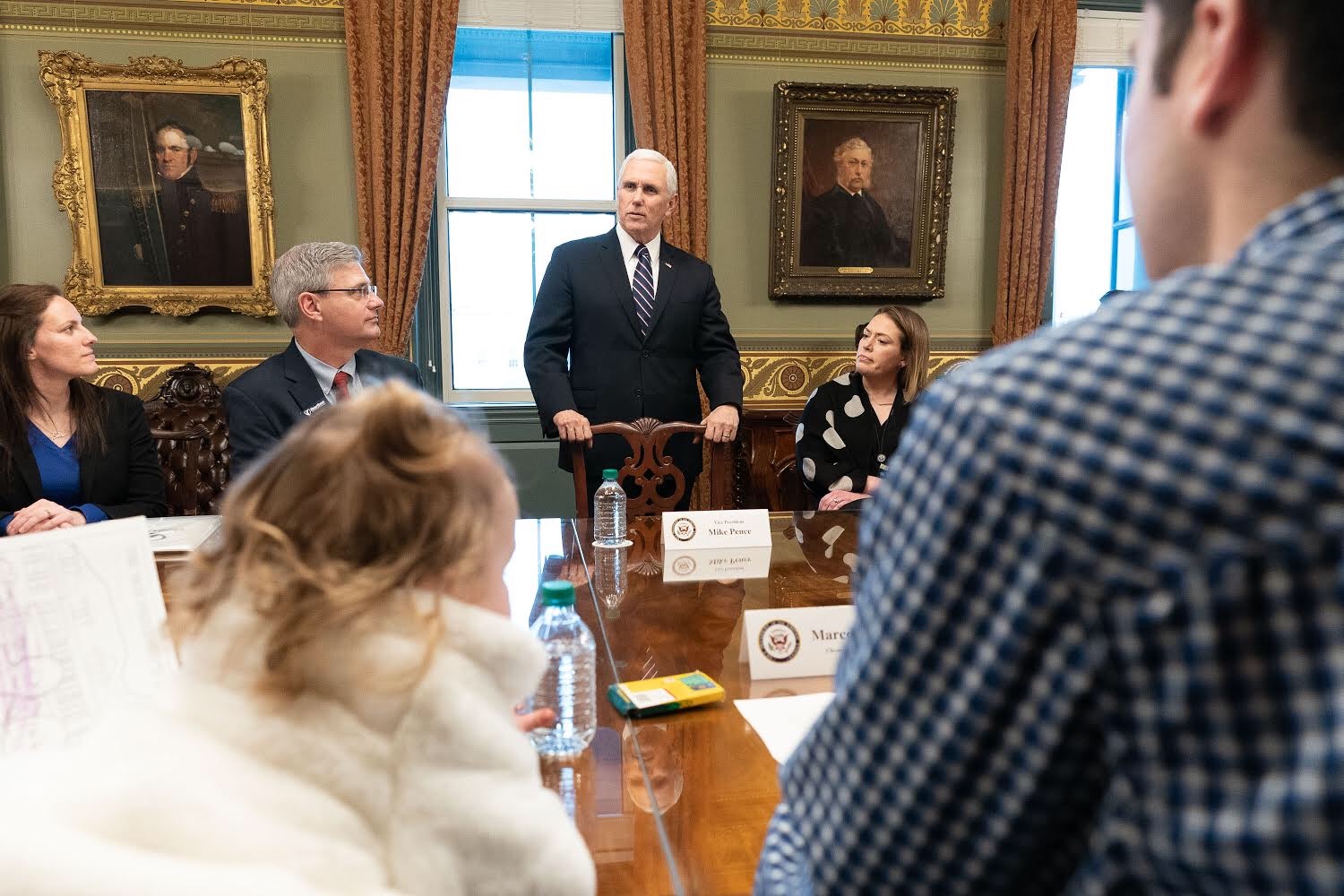 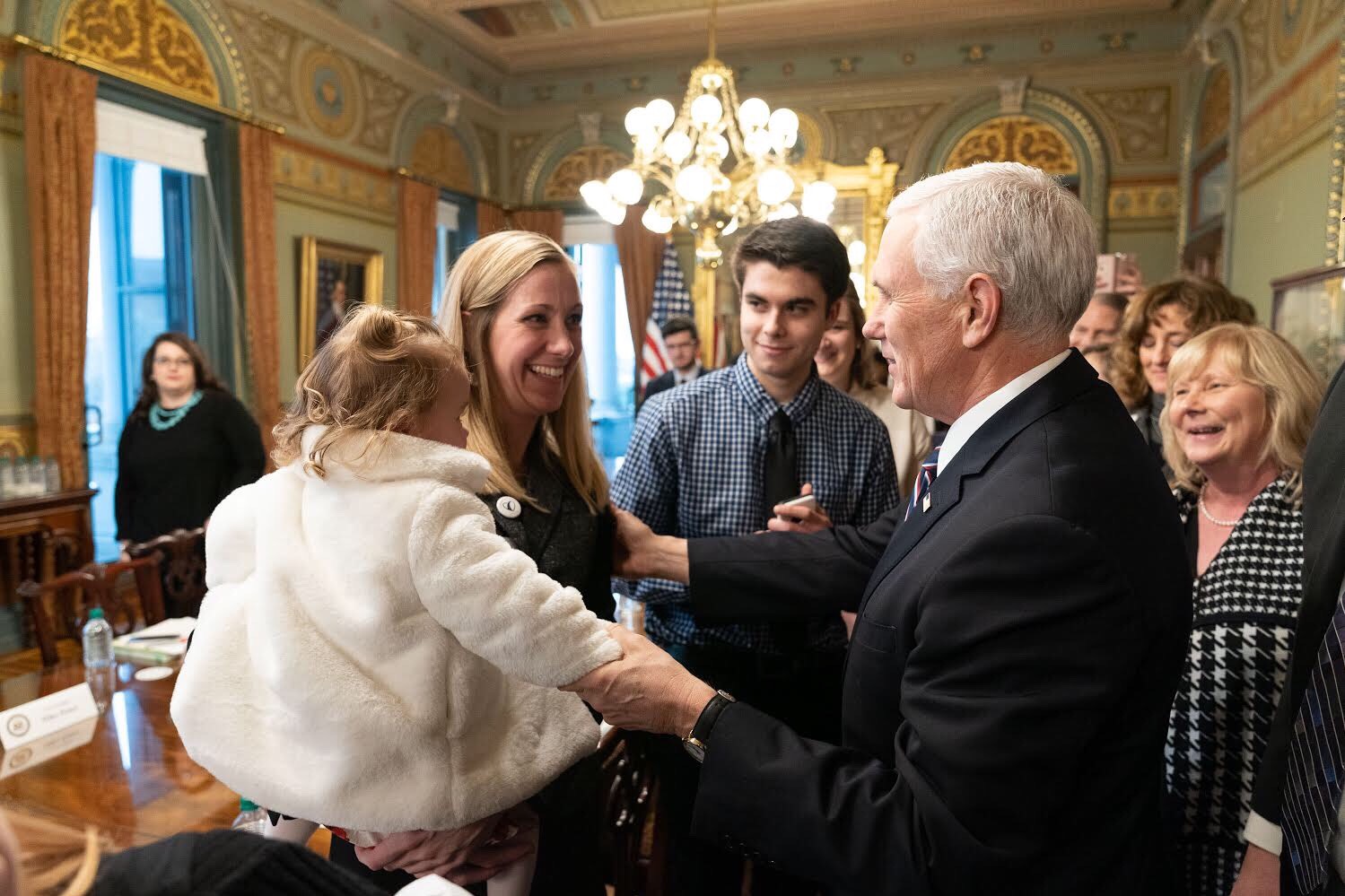 *Editor's Note: This photograph is provided by THE WHITE HOUSE as a courtesy and may be printed by the subject(s) in the photograph for personal use only. The photograph may not be manipulated in any way and may not otherwise be reproduced, disseminated or broadcast, without the written permission of the White House Photo Office. This photograph may not be used in any commercial or political materials, advertisements, emails, products, promotions that in any way suggests approval or endorsement of the President, the First Family, or the White House.