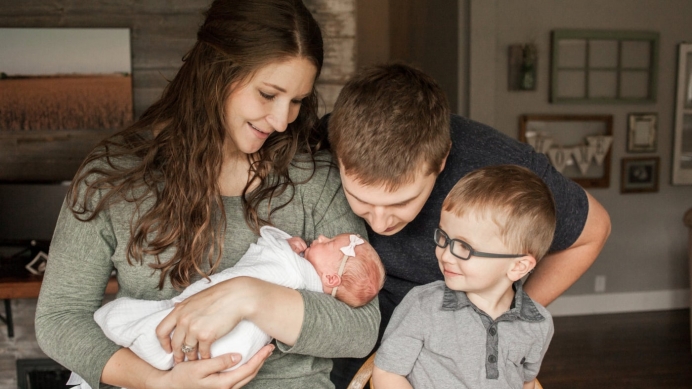 Emily and Jeremy Eekoff with their children, Liam (2) and Ruby. Photo By: Lori Mortensen

How An App Saved Baby Ruby’s Life at 33 Weeks

Thrilling news out of Iowa, where Jeremy and Emily Eekoff are settling into life with their second child.

Just a month ago, the family’s newborn, Ruby, was rescued from what doctors say likely would have ended with a stillbirth at 33 weeks in utero. The life-saving difference was a free app called, “Count The Kicks.”

The Eekoffs shared their story earlier this week on ABC’s Good Morning America. Emily had downloaded the app—which monitors a preborn baby’s activity—at 28 weeks, and noticed a steep drop-off in Ruby’s movement at 33 weeks and five days.

Tracking Ruby’s movement for the previous five weeks, Emily knew she needed to get help right away, and the data at her fingertips enabled her to give doctors at a local hospital enough information to act in time to deliver Ruby early via cesarean section.

“The kicks were not happening as often as they usually did,” Emily said. ”When she did move, it was really soft and—not hard, like normal. We have a healthy baby girl and we could have had a funeral instead.”

Rushed to the hospital, the Eekoffs soon learned that the umbilical cord had wrapped around Ruby’s neck three times. The only way Emily knew it had happened was by tracking the kicks through the app, which sends push notifications and reminders.

“Not only has Ruby been saved, but potential generations have been saved,” Emily Price, president of Count the Kicks Foundation, said.

Count the Kicks, as ABC reports, was pioneered by five Iowa mothers who had each suffered a miscarriage late in pregnancy in the early 2000s.

The women first teamed up to launch Iowa’s Stillbirth Registry, which Count the Kicks touts on its website as, “the most comprehensive stillbirth data collection program in the country” back in 2004, and they continued to work together in the following years to raise awareness on stillbirth prevention.

Count the Kicks has a goal to rescue 6,000 lives each year through its app and ongoing public awareness campaign, which has gained a well-deserved boost through Ruby’s story. Over 5,000 new subscribers have downloaded the app since news of Ruby’s birth first came out.

While apps and technology like Count the Kicks, What to Expect Pregnancy Tracker, BabyBump Pregnancy Pro are becoming a norm for expectant mothers, they’re also driving home the undeniable humanity of children at every stage of development.

Tweet This: @CountTheKicks app aims to save 6K babies a year. Here's one remarkable story. #prolife

Currently, third-trimester abortion is legal in selected circumstances in all 50 states, while several states—Colorado, New Hampshire, New Jersey, New Mexico, Oregon, Alaska, Vermont and Washington D.C.—allow abortion up until the point of birth for any reason whatsoever.

“Normally what we tell people is, ‘First, you have to learn how your baby—your fetus—is moving,’” Ashton, a fellow at the pro-abortion American College of Obstetricians and Gynecologists, said. “Every fetus has a different activity level in utero just like they do when they’re on the outside.”

While baby Ruby’s story is cause for unqualified celebration, it’s also cause for reflection and repentance on behalf of a society that hides behind terms like “fetus” to take the lives of babies even at the latest stage of development.

Editor's note: A previous version of this article stated Rhode Island and Washington state allowed third-trimester abortions for any reason. This version has been updated for accuracy. (7/6/17)