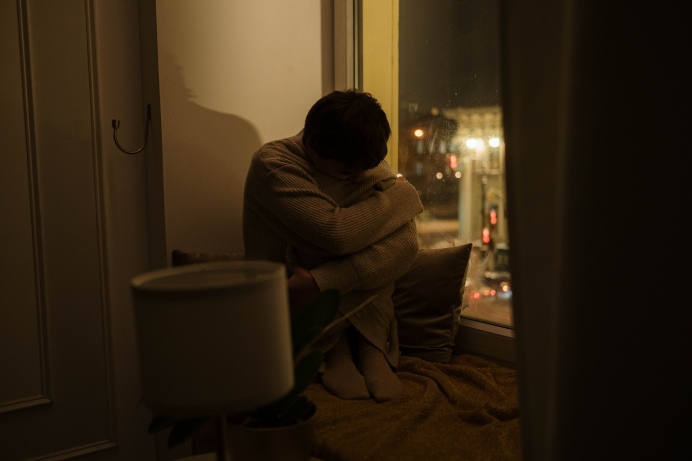 High price of failing to address the emotional aftermath of abortion

Projection: … to attribute unacceptable feelings or impulses to someone else to avoid confronting them. Projection allows the difficult trait to be addressed without the individual fully recognizing it in themselves.

MSNBC’s Joy Reid thinks Fox News needs to more aggressive in pushing COVID vaccines. In a conversation with Stephen Colbert she said, “It doesn’t make sense to me why [Fox News] would want to kill their own viewers. Their viewers are older. Their viewers are more susceptible to COVID and I don’t understand what the point is of killing them.”

Statements like this may have nothing to do with COVID, or even succeed as click bait for the dismal ratings of MSNBC. Sometimes they can be a cover for something much deeper and threatening that lurks beneath the surface of the unconscious mind.

Joy Reid is an African American. Reid, and her colleagues at MSNBC, and the vast majority of the far left wing of the Democratic Party, are radically pro-abortion.

In New York City in some years, more Black children die in the womb than are born.²

Dr. Alveda King, niece of Dr. Martin Luther King and founder of Civil Rights for the Unborn, shares how the Shockwaves of Abortion are devastating the African-American Community:

“You don’t serve the poor by taking their money to terminate their children. Abortion is accomplishing the goals of which racism only dreamed.”

One might ask Joy Reid, “Why would you want to kill your own people?  Given the abortion rates in minority communities, I don’t understand the point of killing them.”

Abortion loss at the epicenter of Roe v. Wade

Such projection, and re-enactment of themes associated with the complicated grief and other feelings that accompany an abortion experience, have an integral role in the foundation of legalized abortion in the United States.

On Dec. 26, the same day that Joy Reid was projecting the abortion guilt of the radical left onto COVID and Fox News, Sarah Weddington died. She was the attorney who successfully argued the Supreme Court decision that legalized abortion.

In 1969, Weddington approached a desperate and pregnant Norma McCorvey. Over a pizza lunch Norma signed the paperwork making her the plaintiff “Jane Roe” in the infamous abortion suit against the state of Texas. In 1973 the Supreme Court ruled in favor of the plaintiff and legalized abortion in the United States.

What is less known and understood is how Weddington’s own abortion, years before Roe v. Wade, played a central role in opening the door to a decision that led to the death of now more than 60 million children.

In 1967 Weddington and her then-boyfriend Ron Weddington, both law students at the time, were facing an unplanned pregnancy. They did not want to disrupt their educational goals.

Abortion was illegal in Texas. So in the fall of 1967 Sarah and Ron drove south to Eagle Pass, Texas, crossed the border and entered a small clinic in the Mexican town of Piedras Negras.

In her memoir A Question of Choice, Sarah recalls waking up after the procedure and thinking: “I hope I don’t die, and I pray that no one ever finds out about this.”

Sarah and Ron married the following year. For 25 years their abortion remained a dark secret that was not shared with family or friends. Only in the writing of A Question of Choice did she finally open up about her own abortion.  Sarah and Ron would later divorce. Weddington’s autobiography presents Sarah as a serious woman with workaholic tendencies.

Some women deny and repress their natural feelings after abortion by total immersion in educational and career pursuits. Some report an increase in various addictions, anxiety/depression, sleep disturbance, relationship difficulties and other ways the complicated pain and grief after abortion is both repressed, and expressed.

Tweet This: Some women deny & repress their feelings after abortion. Some report an increase in addiction, anxiety/depression, sleep/relationship issues

Others discover a vocation in abortion rights activism.

Some of the pioneers of reproductive rights, such as Kate Michelman of NARAL and Gloria Steinem, zealously promoted abortion after their own procedures.

Those with previous abortion loss, consumed with the fight to expand and validate abortion rights, are continually repressing any negative feelings and memories of their own abortion experience.

This powerful emotional energy is directed into what they and others see as a noble and just cause. Any feelings of grief and shame from their abortion experience are channeled into activism, and displaced onto the enemies of choice.

Pro-choice feminists like Michelman, Steinem and Weddington re-enact and re-validate their own unhealed abortion losses by “empowering” other women to make the same “choice” as they did.

Leslie Blackwell of the Silent No More Awareness Campaign shares about her pro-choice activism after an abortion:

“I discovered I was pregnant and I had just landed my dream job as a TV Talk Show Host.  A roommate drove me to an abortion clinic in Greensboro, N.C. After graduation, I threw myself into the new job creating a façade of the perfect young career girl who had it all together … drinking, drugging and sleeping around … self-destructing. Trying to validate my choices, I became a strong pro-abortion supporter and at times militant with anyone who didn’t agree with my opinion.”

The body remembers what the mind and heart deny and repress.

Many women and some men experience depression, anxiety and grief around the time of the anniversary of their abortion, or on the actual due date of their child.

Norma McCorvey, (who later came to regret her role as Jane Roe) shared in a radio interview with Fr. Frank Pavone of Priests for Life, that her meeting in 1969 with Weddington was held on the anniversary of the lawyer’s illegal abortion in Mexico.

We continue to live with the unfolding toxic fruits of the legalization of abortion and the failure to heal the emotional and spiritual wounds left by the procedure.

It’s time for the killing to end, and the healing to begin.

Editor's note: Kevin Burke, LSW, is a pastoral associate of Priests for Life and co-founder of Rachel’s Vineyard. An expert on men and abortion loss, he is the author of Tears of the Fisherman and co-author of Rivers of Blood/Oceans of Mercy. Theresa Burke, Ph.D., is the founder of Rachel’s Vineyard and a pastoral associate of Priests for Life. She is the co-author of Forbidden Grief and Rivers of Blood, Oceans of Mercy. Pregnancy Help News welcomes guest contributions; views expressed by guest contributors are the author's and may or may not be representative of PHN or Heartbeat International. Heartbeat offers a list of Abortion Recovery resources HERE.

²“…In 2013 black women accounted for 29,007 terminated pregnancies, representing almost 42 percent of all abortions in the city…With abortions surpassing live births by nearly 5,000, African American women in the city clearly terminated pregnancies more often than they carried babies to term.” (According to a report by the Department of Health and Mental Hygiene’s Bureau of Vital Statistics – Politifact)