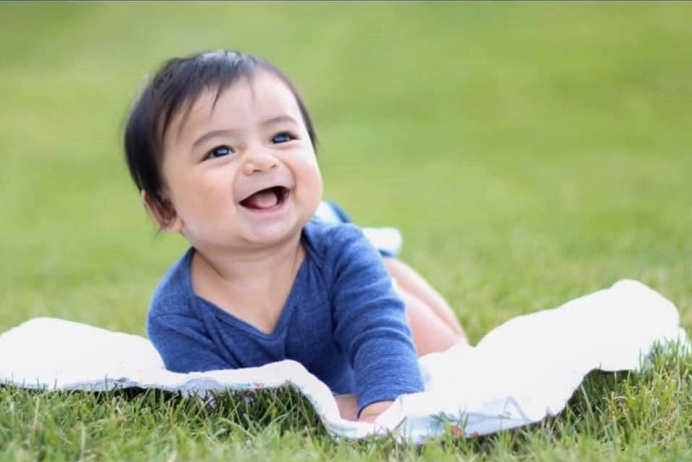 “He, like all other babies, deserves life!" - Mom reverses chemical abortion, becomes pro-life

Rita and her fiancé were in the midst of a three-hour car drive home when she began hemorrhaging. She was eight weeks pregnant and had just left an abortion facility where she had begun a chemical abortion.

As Rita would later recall, she was bleeding “so severely it was dripping like a faucet that wouldn’t turn off.”

Rita’s fiancé rushed her to the hospital where she was given a blood transfusion and monitored for the next three days.

“I was in so much pain it felt like I was being ripped apart internally!” she said.

Despite the terror of those few days at the hospital, Rita discovered something that would bring her immense happiness: She was still pregnant and her baby still had a heartbeat.

With that news, Rita was able to find a life-saving treatment known as abortion pill reversal. To Rita’s joy, it worked.

Now, nearly two years after that fateful day on the road, Rita is the mother to a happy one-year-old boy.

“He’s 15 months old now and is the sweetest, happiest and most beautiful little boy I have ever laid my eyes on!” she wrote on a Facebook post made by pro-life advocate Laura Klassen. “God was truly with me, and now I see why, my son’s my biggest blessing.”

So impactful was the experience on Rita’s life that today she is outspokenly pro-life.

According to a message she sent to Klassen, that wasn’t always the case.

Rita explained that she grew up believing that abortion was a “choice” and that an unborn child in the womb wasn’t a human life. Her own mother had two abortions.

But because of the transformative experience of saving her baby, Rita was able to help her mother become pro-life, as well.

“I should have never been able to take my son’s life,” Rita wrote to Klassen. “And seeing him here today is such a blessing! He’s a radiant soul with a happy, laughing, and smiley energy that radiates a room! He, like all other babies, deserves life!”

Tweet This: “I should have never been able to take my son’s life ... He, like all other babies, deserves life!” -Mom of son saved from chemical abortion

That’s exactly what the team at Abortion Pill Rescue is hoping to ensure. The group—a network of more than 800 medical providers run by Heartbeat International—has helped save more than 1,100 from in-progress chemical abortions since it launched more than a decade ago.

“Many women regret their abortions and often that regret sets in right away,” said Christa Brown, director of Medical Impact for Heartbeat International. “Many women contact the APR hotline as soon as they get to their cars in the abortion clinic parking lot. Or, like Rita, regret already begins on their way home from the clinic. The realization sets in that they are ending the life of a child and they want to know if they have options.”

A chemical abortion—often referred to as the “abortion pill” or RU-486—actually involves two drugs. The first, which Rita took, is mifepristone, a drug that destabilizes the pregnancy by blocking progesterone receptors. The second, typically misoprostol, triggers contractions, forcing the woman’s body to expel her baby in very premature labor, often at home.

If a woman changes her mind after taking the first drug, she may be able to save her baby with help from the Abortion Pill Rescue Network. By calling the 24/7 helpline (877-558-0333), she is connected with a local medical provider who offers the treatment.

Brown says that even in seemingly dire cases—like Rita’s—babies have been rescued.

“Many assume that some bleeding after taking mifepristone means it's too late to save the baby,” Brown said. “But that isn't necessarily true.”

She said that mifepristone is known to cause fever, heavy bleeding, abdominal pain and nausea.

“The FDA states that cramping and vaginal bleeding are expected with mifepristone and warns that one in one hundred women who have taken just the mifepristone will have bleeding so heavy they will require a surgical procedure to stop it,” she said.

When combined with the second drug, misoprostol, the effects of a chemical abortion are more alarming still.

“I’m very concerned about the abortion pill because aside from the fact that it’s killing babies, it’s being marketed heavily to young women as ‘easy’, and ‘safe’, and that you can ‘do it in the comfort of your own home,’” Laura Klassen told Pregnancy Help News in an email. “But I am hearing the horror stories regularly.”

“What I have come to find is that the RU-486 pill is much more bloody and painful than the abortion industry portrays it,” Klassen said. “What I am hearing is that women are often sent to the hospital during the process because of hemorrhaging, or else they’re having to go weeks later to have surgery because parts were left inside.”

“The medical staff of APR hear from women who are scared, alone and bleeding heavily,” she said. “Because chemical abortion is often advertised as ‘inducing a period,’ and because abortion providers often describe the bleeding as spotting, many women are shocked by the amount of pain and bleeding the abortion pill causes.”

Yet if a woman contacts the Abortion Pill Rescue hotline soon enough after taking the first drug, she may not suffer the same experience.

In cases where an ultrasound can still detect a baby’s heartbeat—even a faint one—the abortion pill reversal treatment can begin. To initiate that process, a medical provider prescribes bioidentical progesterone, such as Prometrium, to the pregnant woman. The hope is that by flooding her body with progesterone, they can restabilize the pregnancy.

“It works to outnumber and outcompete the mifepristone for those receptor sites in the uterus and placenta and is successful about 68 percent of the time,” Brown said, referring to a study by physician George Delgado, one of the founders of the Abortion Pill Rescue Network.

With more and more babies being rescued by the treatment, Brown says the protocol is an important form of empowerment for women.

“APR empowers women with real choice,” Brown said. “No woman should ever feel pressure to complete a medical procedure she no longer desires.”