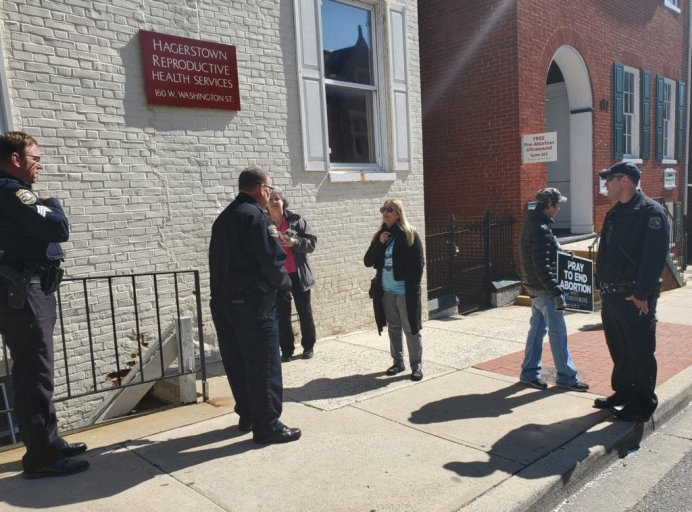 In a letter sent to Mayor Robert Bruchey, Chief of Police Paul Kifer, and the city attorney, Thomas More Society attorneys have demanded that the city confirm immediately in writing that Wanda King and her colleagues may return to their peaceful activities outside of the Hagerstown Reproductive Health abortion facility without fear of arrest or citation.

The latest incident prompting the demand letter occurred on April 7, 2020. That morning, three Hagerstown police officers, standing shoulder to shoulder, approached King while she was standing on the sidewalk outside of the abortion vendor at 160 West Washington Street. There, they threatened her with a $5,000 fine for allegedly violating Maryland’s “stay home order.” King was present with one other individual, each of them maintaining approximately 15 feet of distance from each other, as they prayed and peacefully expressed a pro-life message. When police prepared to issue her a citation, a friend of King arrived to pick her up and drive her home.

Michael McHale, Thomas More Society Counsel, stated, “We stand fully prepared to defend the constitutional rights of Ms. King and other pro-life individuals to be outside Hagerstown Reproductive Health to exercise their freedom of speech and religion while practicing social distancing, and we are ready to take immediate court action if necessary. As long as the abortion mill is engaging in business as usual, our clients have a right to be outside on the public sidewalk witnessing to life and offering alternative healthcare options, while of course maintaining social distancing and gathering size limitations.”

Five days before police officers threatened King with a $5,000 fine, they ordered her and several other pro-life advocates to leave the same location, accusing them of violating the “stay home order” even though they were maintaining social distancing.

After that incident, one member of the group informed Maryland State Delegate Neil Parrott about the incident. Parrott then made an inquiry about the matter to the Governor's Task Force, which informed him that the pro-life individuals in Hagerstown could be outside the abortion clinic within due limits. This information was emailed to Hagerstown Police Chief Paul Kifer, who did not respond, despite three additional emails about the matter.

“Even by its own terms, the Maryland Stay Home Order prohibits religious and spiritual gatherings of the kind our clients engage in only where they have more than 10 people,” explained McHale. “At the same time the Maryland Department of Health has demanded the cessation of all elective and non-urgent medical procedures through the duration of the catastrophic COVID-19 health emergency. Almost all abortions are elective, yet the Hagerstown abortion clinic continues to operate with impunity and without regard to such limitations. This selective enforcement of parts of Maryland's orders to stop the spread of COVID-19, threatening Ms. King and other pro-life advocates while turning a blind eye to the elective abortion procedures occurring just yards away, is unlawful.”

Tweet This: Almost all abortions are elective, yet the Hagerstown abortion clinic continues 2 operate with impunity & without regard 2 such limitations.

Editor's note: This report was published by the Thomas More and Society and is reprinted with permission. The Thomas More Society is a national not-for-profit law firm dedicated to restoring respect in law for life, family, and religious liberty.