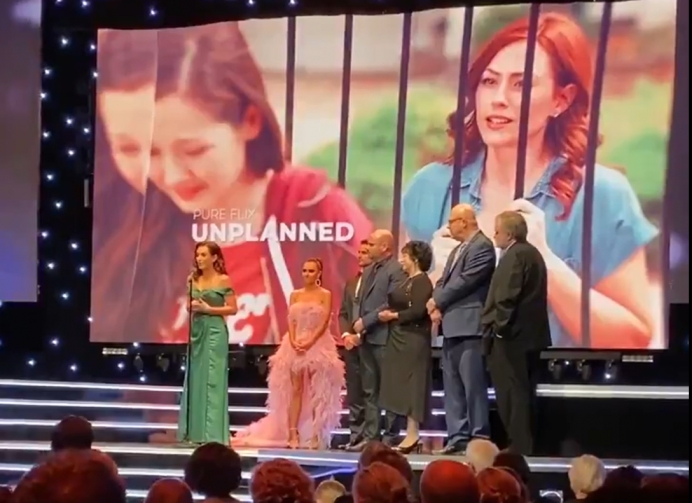 (Washington Examiner) Hallmark doesn’t want you to hear about the pro-life film Unplanned.

At the annual Movieguide Awards, which recognize Christian and family-friendly entertainment, Unplanned nabbed three nominations: the faith and freedom award for movies, best movie for mature audiences, and the grace prize for movies, which acknowledged Unplanned lead Ashley Bratcher.

But when the awards aired on Hallmark Drama last week, Unplanned was cut out of the broadcast completely, according to Bratcher. That included not only her speech recognizing the film’s nomination as best movie for mature audiences, but also even the mention of Unplanned amid other nominees.

“It's one thing to cut the speech, it happens all the time, but the show completely erased us in the nominee announcements,” Bratcher said in an email. “Every other nominee was announced. There's no excuse, even if they say it's time. It takes a millisecond to show our nominee clip.”

A clip of the broadcast provided by Bratcher reveals that neither she nor Unplanned were mentioned among nominees for the grace award, for which Bratcher was nominated.

Outraged. Movieguide awards recently aired on @hallmarkdrama & @UnplannedMovie & I were nominated. We were the ONLY nominees who were not recognized. Hallmark has ERASED us from the show and refused to acknowledge us as nominees. This is completely UNACCEPTABLE.@hallmarkchannel pic.twitter.com/n6KZiXnp1k

Hallmark did not immediately respond to a request for comment.

During her speech at the Movieguide Awards, Bratcher said she doesn’t want audiences to remember her name as much as her message.

“It's all glory to God, and if no one remembers our names when this is over, please remember this: God is so real, he loves you so much, he has a plan for your life, life is precious,” she said. “And to every woman facing a crisis situation, please know that you can be successful and be a mother, and that children will enrich your life along the way."

Tweet This: "Know that you can be successful and be a mother, and that children will enrich your life along the way "-Ashley Bratcher to women in crisis

If Hallmark has anything to do with it, no one will remember either one.

Editor's note: This article was published by the Washington Examiner and is reprinted with permission.