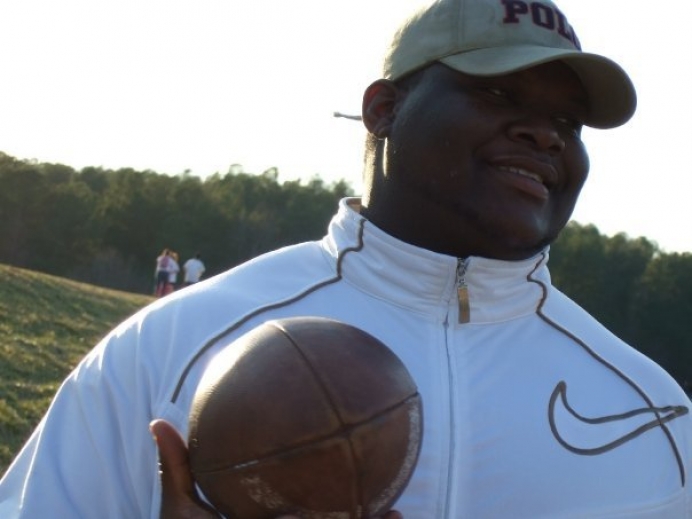 RALEIGH, N.C. -- When Gateway Pregnancy Center in Raleigh, NC saw the need to reach fathers more effectively, Executive Director Wendy Banister reached a point of decision. She could continue a course of part-time fatherhood coordinators, or take the ministry’s commitment to a new level.

Banister chose the latter road, and by taking Gary Freeman’s role as Fatherhood Coordinator/Campus & Community Liaison to a full-time position, Gateway is seeing a 300 percent increase in male clients.

“Gary has had a passion to reach out to men since he hit the door,” Banister said. “As soon as he joined us (part time in September of 2013), doors began opening.”

And while Freeman is a gentle husband and father of a four-year-old daughter, the 30-year-old makes quite a sizable impression on the young men who come to Gateway. He’s 6-foot-2, and was a four-year college football letterman on the offensive line at NCAA Div. I East Carolina.

“He can identify and relate to all of the guys we see,” Banister says. “Because he is African-American, he can reach our African-American clients, and they are the majority for us. But he can cross over and connect with anyone; white, black, anyone.”

For Gateway, the outreach to fathers began with a two-year grant from The National Fatherhood Initiative, given through CareNet to nine centers in the United States. “They gave us a detailed set of deliverables,” Banister said. “There was structure and guidelines so that we could measure our success.”

Gateway saw those successes with two coordinators in the first 24 months of its initiative, but when the grant ran out, Banister was determined to keep the program afloat.

From there, the next decision was to make Freeman a full-time coordinator so he could see more clients who came in the door, while scheduling a growing number of invitations to speak at campuses and churches in the area. To advance Freeman’s role, and strengthen overall staffing for Gateway, $100,000 was needed.

For this step, prayer was the key. “The real answer is, we got on our knees,” Banister noted. “When you are an executive director and you are looking at having to cut back on staff because of funds, you begin praying differently.”

The funding came in, and so did more requests from churches and universities. In particular, a door opened at nearby Shaw University, where Freeman had been speaking regularly at chapel services and at meetings in residential dorms, giving Gateway a strong on-campus presence.

In addition, Freeman often speaks in churches. “89 percent of our clients say they are Christians; what I do is mostly preventative,” he says. “I talk about keeping your gift and how important that can be to a relationship.”

Then there are the many young fathers coming into Gateway. “Every time we make an appointment, we ask the girl if she is bringing her boyfriend,” Banister said. “This has made a huge difference.”

And when they come in, Freeman is either in the office or just a phone call or text away. “He can just say, ‘Let’s go upstairs and talk,’” Banister said.

The impact, Banister explains, is powerful.

“Our female client advocates have so much more confidence with a guy here,” she said. “The main difference is that we are better valuing a dad’s role. We are able to break down barriers and boundaries.”

Through Gateway’s software, Freeman always has a list of “his” fathers, including when he last had contact with each, and where they are in building a relationship.

“When we started the system, I had no idea how many guys I was missing,” Freeman said. “Now I can get on (the software) and set follow-up dates, keep due dates on file and see when I need to give a guy a call just to see how he’s doing.”

At its 2014 conference, CareNet gave Gateway and Freeman its Fatherhood Outreach Award, but at Gateway there is a determination to go further.

“We changed software last year, so we now have everything in place to better measure our results,” Banister said. “This year we are looking to track how many fathers are coming in for ultrasounds, and how this is impacting changed minds and choosing life.”

For Freeman, keys for future success will likely depend on being available for the fearful new father. Just before Christmas, he saw the perfect example of this need. On a day the center was supposed to be closed, a teenager—a junior in high school—and his girlfriend were waiting at the door.

“We were supposed to be closed; they were at the door as soon as we opened,” Freeman said. “When they found out they were pregnant, he was kind of out of it. I had to get him to zone in.”

Freeman’s ability to capture the attention of young dads, using his football background and his ability to connect with almost anyone, helps these dads as they begin a new journey.

Banister sees Freeman’s role as both simple and powerful. “Gary is about bringing out the best in someone,” she says. “He is exactly who we needed, at the right time.”