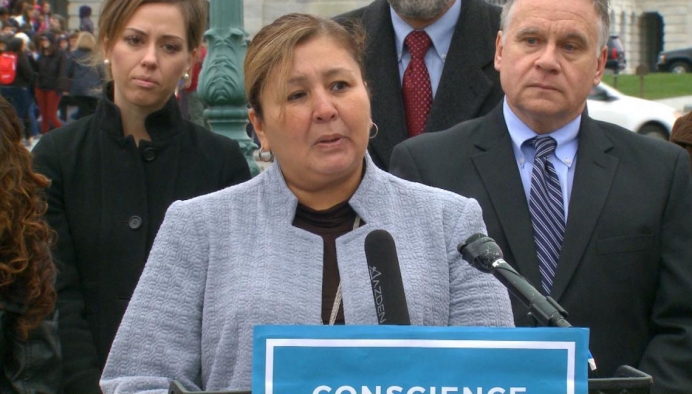 In 2015, Sandra (Mendoza) Rojas was forced from her job of 18 years because she wouldn't participate in abortions. Photo Courtesy: Mauck & Baker

Forced Out of Her Job Because She Wouldn't Refer for Abortions, Illinois Nurse is Fighting on for Free Speech

In 2015, Sandra (Mendoza) Rojas, a pediatric nurse in Illinois, was given three options by her employer, the Winnebago County Public Health Department. She could start providing abortion referrals, take a demotion or quit.

Though she ultimately chose to resign a position she’d held for 18 years—refusing a demotion from nurse to food inspector—Rojas is now doing her part to see that she’s the last public healthcare worker forced to choose between her conscience and her career.

Rojas, who filed a lawsuit in 2016 against Winnebago County, recently lodged a formal complaint with the U.S. Department of Health, arguing that the County’s discrimination is prohibited by federal law through Title VII of the Civil Rights Act.

“Federal law prohibits government officials from discriminating against medical professionals who cannot in good conscience participate in abortion,” Noel Sterrett, lead counsel for Mauck & Baker—which, along with Alliance Defending Freedom (ADF) is representing Rojas—said in a news release. “Those that compel pro-life doctors and nurses to act contrary to their conscience should not qualify for federal funds We have filed this complaint to inform the HHS of what is happening so that it can take action.”

In 2015, Winnebago County’s public health administrator Dr. Sandra Martell instituted a policy that forced all nurses to be trained to refer patients for abortions and abortifacients such as the Plan B “morning-after” abortion pill.

When Rojas expressed her objections to the new policy, Martell told her she would either need to comply or accept a demotion if she still wanted a job at Winnebago County.

In her previously filed lawsuit, Rojas cited protections under Illiniois’ Healthcare Right of Conscience Act—which was one of the strongest state-level protections in the U.S. at the time Rojas was forced out of her job.

In the summer of 2016, the Democrat-controlled Illinois statehouse passed a law gutting the Act and forcing pro-life medical professionals of all stripes—including those at pregnancy centers—to refer women for abortions and advise them as to the unspecified “benefits” of abortion.

That legislation, though signed into law by Republican Gov. Bruce Rauner, was subsequently halted by a federal judge in July 2017 and its utlimate fate likely rests on the outcome of National Institute of Family and Life Advocates (NIFLA) v. Becerra—a case before the U.S. Supreme Court challenging a 2015 state law in California that’s set to be argued March 20 before the nation’s High Court.

Tweet This: @MauckBaker, @AllianceDefends standing with #Illinois nurse forced out of her job for refusing to refer for #abortion

In mid-January, Mauck & Baker submitted an amicus brief in the case on behalf of 23 pregnancy help centers in Illinois, pointing out the similarities in the two attacks on pro-life free speech.

“The government has no business forcing pro-life doctors and pregnancy care centers to operate as referral agents for the abortion industry,” Sterett said. “A law that targets medical professionals because of their pro-life views and right of conscience is unconstitutional and unethical.”