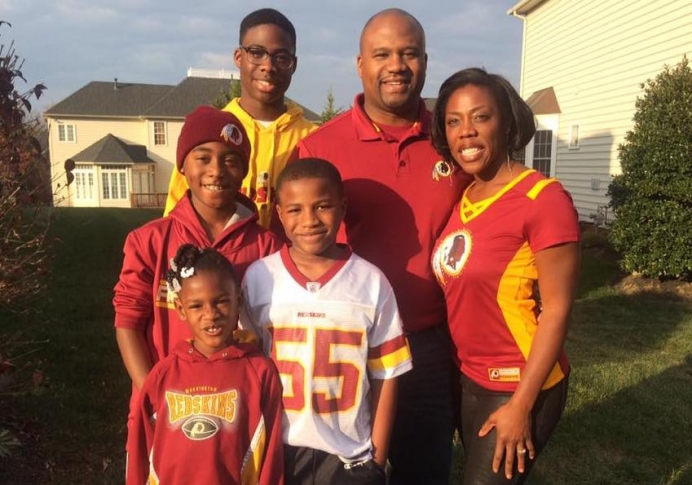 D.J. and Glorya Jordan and their family in 2016. Photo Courtesy: The Jordan family

As anyone who’s ever left home can tell you, family is hard thing to come by when you’re far from home. Until you’ve found that sense of belonging you left behind in your hometown, there are few lonelier feelings.

All the more so when you’re dealing with an unexpected pregnancy.

Sixteen years ago, that was D.J. and Glorya Jordan. Newly married and two months away from welcoming their first child, the Jordans had just moved from Lynchburg, Va., to Laurel, Md., where D.J. was starting an entry-level position in broadcast journalism.

Seven months prior, they had found out Glorya was pregnant just as they were finishing their last year at Liberty University. That revelation prompted D.J. to pop the question and wonder how he would support his family on a starting salary that wasn’t anything to write home about.

“It was really something that came out of left field,” D.J. Jordan said. “It really interrupted our lives and the plans that we thought were best for us at the time. We never considered abortion, but still, the stress and the crisis of an unexpected or unplanned pregnancy was just as real for us.”

With finances in short supply and—more to the point—far away from their own families, the Jordans reached out for help to Laurel Pregnancy Center, a pregnancy help medical clinic that now offers free ultrasounds and free pregnancy tests in addition to material support and peer options consultation.

What they found there is something the Jordans will never forget. In fact, it’s set the tone for their life together ever since.

“We weren’t part of a church community, we didn’t have any support and this pregnancy center was there for us,” Jordan said. “They gave us emotional support as well as practical things to help us in the pregnancy and when our child was born. It was incredible because it was in a sense a family for us.

“To this day, it has made a profound impact on our start as a family. It really gave us a good support and foundation for where we are today.”

Joining the Ranks of the Heroes

As they got their feet under them in a new place and new phase of life, the Jordans began getting involved in leadership for Laurel Pregnancy Center, with D.J. stepping up to serve as a board member and Glorya coming alongside new and expectant moms to teach a parenting class.

They also added two more sons along the way, while Glorya found time to go back to school and become a critical care nurse and D.J.’s career brought him to full-time positions at CNN and Fox News.

In 2008, D.J. shifted his career path to politics, landing a position as press secretary for U.S. Representative Robert Aderholt (R-AL). He’s been on Capitol Hill ever since, earning a master’s degree in public management from Johns Hopkins University along the way.

Jordan currently serves as communications director for U.S. Senator James Lankford (R-OK)—one of the most outspoken pro-life congressional leaders, who was the first to officially bring Planned Parenthood’s illegal trafficking of aborted baby parts to the Senate’s attention in July 2015.

A former pastor and youth leader for over 20 years in his home state, Lankford has introduced bills to redirect federal taxpayer funds from the nation’s leading abortion provider to federally qualified health care providers and ban dismemberment abortion—where an abortionist tears a second-trimester baby limb from limb.

Tweet This: "Pregnancy center was family to us." @_DJ_Jordan #prolife

Lankford is also an unapologetic champion for pro-life pregnancy centers, which he has called “heroes in the lives of so many children and families.”

While the Jordans’ experience with a surprise pregnancy—and the help they received during that time—has gone a long way in etching the need for alternatives to abortion on their hearts, they added another significant layer to their pro-life commitment in 2013.

That “layer,” it turns out, is a person, their 5-year-old daughter, Victoria.

With Glorya joining the board of Care Net Pregnancy Resource Centers in Prince William County, Va., D.J. was serving on Virginia’s state Board of Social Services and advocating for adoption when they sensed a personal challenge to do more to help.

“We can’t say one thing with our mouth and do something else with our life,” Jordan said. “So, for us, it was a very, very strong conviction that we should be part of the solution by advocating for life through adoption.”

Adding a girl to the mix in a household dominated by boys—where D.J. has gotten used to putting his guard up as he walks through the door after a long day on Capitol Hill—has brought a drastic change to the Jordan household, D.J. says.

But it’s a change they wouldn’t trade for the world.

“It was a huge shock,” Jordan said. “It’s just amazing how different girls are compared to boys. My daughter will be the first one to greet me at the door, and she will give me the softest, warmest little hug that you ever felt in your life. It just warms your heart.”