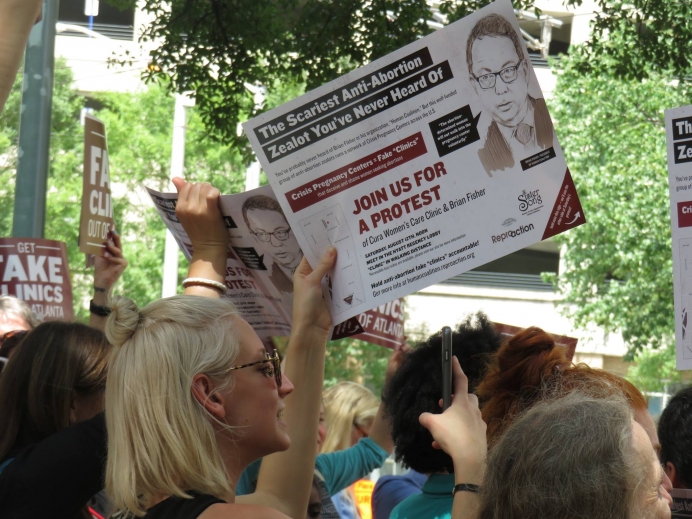 An estimated 150 abortion advocates marched this Saturday against Cura Women’s Care Clinic in Atlanta, according to NPR affiliate WABE, the latest in a spate of on-site pregnancy center protests this summer.

Coordinated by radical leftist groups Reproaction and SisterSong, the protest drew from 3,000 self-identified progressives at the Netroots Nation conference in downtown Atlanta, which was sponsored by Google, Facebook and Planned Parenthood.

Although the protest was promoted as an official event on Netroots Nation’s print and online schedule, just one out of every 200 conference’s attendees made the one-mile trek to protest the pro-life center, which offers free ultrasounds, pregnancy tests, parenting classes and more.

The sparse showing—which took place while Cura was closed for the day—was all the more underwhelming because it came just minutes after Massachusetts Sen. Elizabeth Warren tried to energize the crowd to stand unapologetically in favor of abortion.

Like its forerunners in Pittsburgh, Connecticut, Minnesota and Houston this summer, Saturday’s rally targeted a non-profit pregnancy center that is cutting into the abortion industry’s bottom line.

In the past eight months alone, at least 180 mothers chose life for their babies through Cura Women’s Care Clinic—one of 15 pregnancy centers serving Atlanta women and families.

Overall, as many as 300,000 mothers are rejecting abortion through U.S. pregnancy centers every year, with 99 percent of previous clients reporting they had a positive experience at a pregnancy center.

Those clients, often accompanied by the child they rescued from abortion with the help of the pregnancy center, are quick to tell just how much good the center has done in their lives.

“I would recommend a crisis pregnancy center any day,” one pregnancy center client said. “A lot of people say… that they’ll try to shame you, but it’s quite the opposite. They’re not going to tell you what to do, but they are going to be holistic about each choice.”