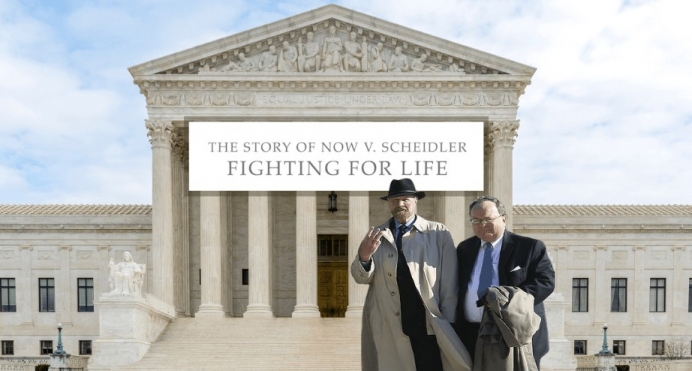 Criminal ... or champion for life?

Imagine having to face criminal charges year after year for performing pro-life work. It might feel impossible to keep going and tempting to settle with the opposition. But persistence is a characteristic God gives to those in the business of saving lives.

God seems to have given an extra amount of persistence to Pro-Life Action League founder, the late Joe Scheidler, and to Tom Brejcha, the lawyer who defended him. For 28 years they persisted in court against deadly and powerful forces arrayed against unborn babies and their parents.

A film to give you courage

Fighting for Life: The Story of NOW v. Scheidler captures the story of a 28-year legal battle between the pro-abortion National Organization for Women (NOW) and Scheidler and Brejcha in a 27-minute documentary. The movie, which premiered March 22, 2021, on EWTN, is a parable of perseverance that can give courage to anyone in the pro-life movement.

Scheidler, who passed away in January 2021, gave up a profitable marketing career to work full-time for pro-life causes.

In 1980 he founded the Pro-Life Action Network (also Pro-Life Action League), which focuses on ministering in public spaces outside of abortion centers through prayer, telling the truth about abortion to women about to enter, and through peaceful protest.

From their appearance or personalities no one would mistake Scheidler for Brejcha or vice versa.

Scheidler liked to gather large groups together and speak to them through a bullhorn. Brejcha is unassuming, with the confidence that comes from being humble and well-prepared. But both men understood the justice of their cause and had no thought of giving up.

A series of court cases between NOW and Scheidler began in 1986 following the success of Scheidler’s organization and the publication of his book, Closed: 99 Ways to Stop Abortion. The film reports on NOW’s attempts to silence voices of truth through trumped-up charges and repeated litigation.

How Scheidler and his wife, Ann, and Brejcha and his wife, Debbie, kept going in the face of such powerful, well-funded opponents is a study in tenacity. Their faithfulness to the cause of life as portrayed in the film gives viewers great encouragement.

Both families faced the possibility of financial ruin.

Brejcha resigned from his business law firm because he could not devote enough time to it while defending Scheidler. They went through litigation numerous times in circuit court, federal court, and even three times before the Supreme Court. They suffered several legal defeats. But for both settling with NOW was out of the question.

“Out of desperation ideas come to the fore, and helpers come forth,” Brejcha explained in a phone interview.

“We enjoyed working with Tom,” Ann Scheidler said in a separate phone interview. “Tom is really brilliant. He thinks of approaches that are not the usual ways to solve things.”

One of Brejcha’s ideas was to start a non-profit law firm, the Thomas More Society, that would uphold the sanctity of life, family values and religious liberty.

Through donations, the Brejcha family was able to stay afloat and continue to give free legal help to the Scheidlers. The Thomas More Society now has over 30 lawyers, with Brejcha as president and chief counsel.

The low point in the legal fight between NOW and Scheidler came from a unanimous defeat before the Supreme Court in 1994, almost eight years after NOW’s first legal complaint against Scheidler.

When asked what kept him going, Brejcha said, “I was buoyed up by [the Scheidlers’] high spirits. The pro-life movement rallied in support of us. There was a lot of prayer. And sometimes a tough situation turns into a good situation.”

Ann Scheidler remembers some of the good that came out of their legal difficulties.

“Because of the notoriety of this case he [Joe Scheidler] was getting more invitations to share why we were being attacked,” she recalled. “It brought attention to pro-life issues and more support than ever before.”

“It was the opposite of what NOW expected to happen,” she added, “the Lord can use things like that.”

Victory for the First Amendment

In 2006 the Supreme Court ruled unanimously in favor of Scheidler.

This court victory was a win for free speech rights for all Americans. It confirmed the right to peacefully protest abortion, to inform women seeking abortion of the truth, and to pray outside of abortion clinics.

As right-to-life groups work outside abortion facilities, thousands of advocates are working inside pregnancy centers (PC’s) and clinics.

Ann Scheidler says she would “recommend working hand in glove with sidewalk counselors. We’re on the same team. Counselors need the PCs to be there [because] we’ve got to give concrete help, and PCs are where they go for help.”

Lighting a fire under the pro-life movement

Brejcha predicts that the Thomas More Society will continue to be very busy in the future.

He said that the Thomas More Society offers to sponsor the services of Sally Wagenmaker, special counsel and past president of the Christian Legal Society, “for anyone who wants to start a pregnancy center [and] to incorporate in 50 states.”

Brejcha understands that President Joe “Biden is a pro-abortion zealot - which puts babies at risk as never before. [But] his extremism may light a fire under the pro-life movement.” Being advocates for life, Brejcha says, “You need staying power.”

Brejcha’s faith in God is what gave him that staying power.

“We get filled with God’s grace,” he said. “We believe very strongly in our advocacy. What better than to protect the lives of infants in peril? We can’t be ashamed, reticent or fearful in protecting the lives of those infants.”

Tweet This: “We get filled with God’s grace... We can’t be ashamed, reticent or fearful in protecting the lives of those infants” - Tom Brejcha

Fighting for Life: The Story of NOW v. Scheidler portrays the truth of I Corinthians 15:58: “...be steadfast, immovable, always abounding in the work of the Lord, knowing that your toil is not in vain in the Lord.”

This short documentary shows the value of persistence and inspires pro-life viewers to not give up, even if our opposition seems to be winning. 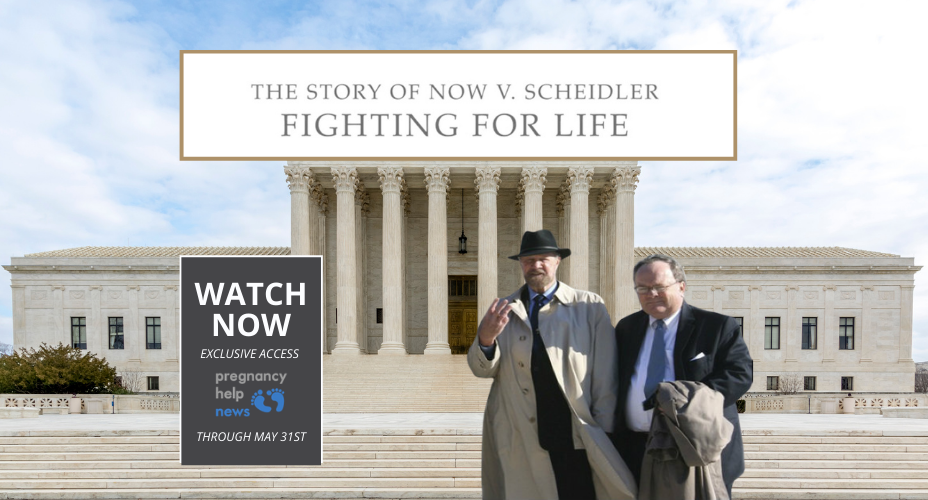 For a limited time, the Thomas More Society is offering a special link for Pregnancy Help News readers to view Fighting for Life: The Story of NOW v. Scheidler. Another way to access the film is to go to thomasmoresociety.org and follow the instructions on the opening page.

For a timeline of the court cases involving Scheidler and NOW, go to prolifeaction.org/nvs/.