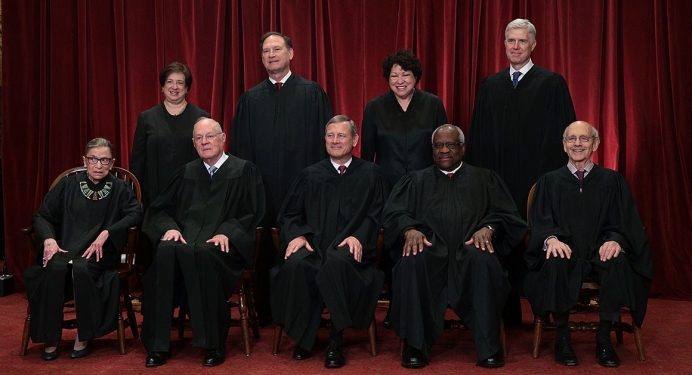 Lawyers. Just saying the word makes some of us think of one of the millions of lawyer jokes.

Here’s one: A lawyer dies and goes to Heaven. "There must be some mistake," the lawyer argues. "I'm too young to die. I'm only 55." "Fifty-five?" says Saint Peter. "No, according to our calculations, you're 82." "How'd you get that?" the lawyer asks. Answers St. Peter, "We added up your time sheets."

We laugh. Because after all, they’re lawyers.

But next week, all of us in the pregnancy help community will be asking God to work through attorneys in a mighty way as they stand before the Supreme Court of the United States, representing pregnancy help centers across California—and by extension, the nation—in what promises to be a landmark case, NIFLA v. Becerra.

You probably know the story. In a nutshell, California passed a law forcing—not asking nicely by any means—pregnancy help organizations to provide information to clients on how to receive government-funded abortions.

In response, California pregnancy ministries did the only thing they could. They went to court.

This is not a difficult case. It should be a slam-dunk for the justices. It is not the job of pregnancy help organizations to provide free advertising for the abortion industry. As we reach out in hope and help for those facing unplanned pregnancies, our assistance does not have to include, “But hey, Medi-Cal provides free abortion for low-income women and you can go right over there to get one.”

Nope. Not on our watch.

In the United States, there is this ticklish little Amendment (#1, for those who are counting) which talks about free speech. In this country, we have the right to say what we believe, and we also have protection against saying things we don’t believe.

So now we have a case, NIFLA v. Becerra, and it goes down on March 20.

We know the NIFLA side of this equation. The National Institute of Family and Life Advocates, founded and led by Tom Glessner. They are the good guys. Tom, Anne O’Connor and their team have been on this case—along with Alliance Defending Freedom (ADF) and so many others—from the beginning. Heartbeat International, Care Net, The Charlotte Lozier Institute, and the entire life-affirming family brought their legal expertise to the table as well.

Friends, we’ve got a great lineup. As I think of our team, I’m reminded of Proverbs 22:29, where Solomon writes, “Do you see a man skilled in his work? He will stand before kings; he will not stand before obscure men.”

The men and women who will take their stand—and already have through amicus briefs and other documents—are indeed skilled in their work. They are the right people for the right time. They stayed up long hours preparing for the LSAT (Law School Admission Test), spent years studying the law before taking the bar exam, then went to work on behalf of sacred rights such as religious liberty and free speech.

Next week, they stand before kings. And make no mistake, in the United States, the Supreme Court is very much “king.” When it rules, it is the law. This may not be what the framers intended when they set up this Republic—they wanted checks and balances—but no one “checks” the Supremes anymore; not the President, not Congress, not anyone. We can argue for or against this, but it’s fact.

If one looks at the behavior of this Court, it appears our odds of victory over this attack on free speech are good. It would be extremely surprising if we didn’t find the five votes needed to win. In fact, the numbers could be 6-3 or 7-2, implying that some of the more liberal justices may find California’s case as a bridge too far.

Yet, one never knows. California Attorney General Xavier Becerra is no doubt primed and ready. He wanted this case, and he aims to win. He’s been a staunch abortion advocate since he entered politics, and we may remember his name because he’s the one who brought charges against the Center for Medical Progress when they outed Planned Parenthood’s scheme to sell the body parts of children.

Tweet This: @NIFLA case could be a last gasp from the slowly dying #abortion industry. @KirkWalden #LetFreeSpeechLive #prolife @AllianceDefends

If we think AG Becerra is going to go quietly on this one, we’re wrong.

For the next week then, there will be no lawyer jokes out of my mouth. Because each time I think of the word, “attorney,” I’ll think of all those—many of them friends—who worked tirelessly, often to exhaustion, to serve our God in a moment like this.

This case could be one of the last gasps of a struggling and slowly dying abortion industry.

So, I will pray for our legal team, as we all should. Because next week, they stand before kings. Together, we believe they will win a victory which will change the face of our ministries and bring us one step closer to ending abortion as we know it.

It’s about time. And if Washington D.C. and the Supreme Court is where we strike our next blow for life, I may never tell a lawyer joke again.