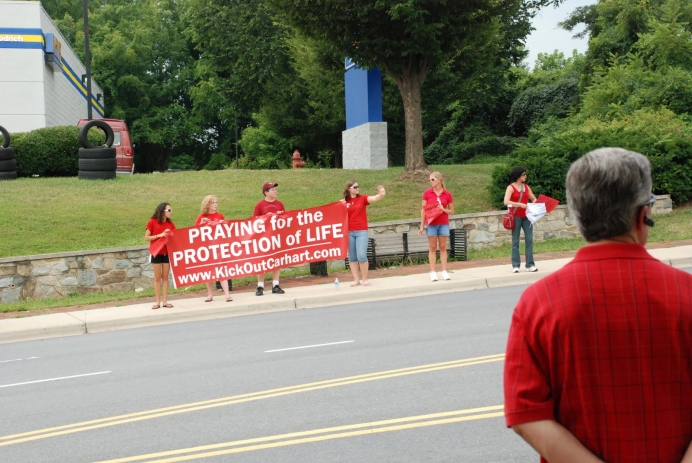 When late-term abortionist LeRoy Carhart arrived in Germantown, Md., in late 2010, local Christians were ready for him.

In 2010, a medical researcher and family man named Andrew Glenn began praying that God would give him a passion to live beyond himself, as well as an opportunity to put that desire into practice.

Later that year, news broke that late-term abortionist LeRoy Carhart was setting up shop to abort babies 20 weeks and beyond at a clinic just a mile down the street from Glenn’s home in Germantown, Md.

Starting in December of 2010, Carhart would fly out to Maryland at the outset of each week to see his patients Sunday night. In that initial appointment, he would inject the preborn baby with deadly chemicals to induce fetal demise, which would be followed up with an appointment in the next two days where he would dilate the women and dismember the babies he killed Monday morning.

The response from Glenn—now a father of five—and other Christians in the area was swift and relentless. He was part of a group that founded the Maryland Coalition for Life, which mobilized 30 area churches and several thousands of volunteers to peacefully pray in front of the clinic for the past seven years.

Now, Glenn and his fellow pro-lifers in Germantown are celebrating the closure of Carhart’s clinic, which the Coalition paid to close down Sept. 27, 2017.

“I think a lot of Christians who had been on the sidelines woke the sleeping dragon, just coming to the realization that late-term abortion was happening in our neighborhood,” Glenn said. “Multiple denominations, both Catholic and non-Catholic, got involved together. We just prayed and asked God what we could do to stand up and help these women who are faced with unexpected pregnancies and difficult situations.”

As they flooded the sidewalks—particularly any time patients would be there from Monday morning through Wednesday afternoon—the Coalition soon ran into a pair of obstacles.

First, because the abortion mill was tucked away in a medical complex, sidewalk counselors and prayer teams weren’t able to come close enough to the clinic to offer hope to the women going in to end their children’s lives through abortion. Second, when the women they were able to reach responded positively, volunteers would need to send them off-site for follow-up help at a pregnancy center.

Then, in March of 2012, an office space opened up right across the way from Carhart’s clinic. The Coalition seized the opportunity and opened a pregnancy help center in the office, giving them a key strategic beachhead for their life-saving operation.

Over 400 women, by the Coalition’s count, changed their minds and chose life as a result of the pregnancy center, “Germantown Pregnancy Choices.”

“I think that was a complete game-changer,” Glenn said. “Sidewalk counselors were able to be there and talk to women going in for abortion, letting them know, ‘Hey, we’re across the street. We have access to resources for you. There are other choices you can make besides going through with this abortion.’”

Because of its partnerships with pregnancy centers that were already established in the area, the Coalition went bare-bones with its center, opting to forgo ultrasounds and keep programming costs at a minimum and refer women out to sister organizations Rockville Women’s Center and Shady Grove Pregnancy Center.

One of the mothers who had decided to carry to term across the street from Carhart’s clinic had gone in for the abortion with her husband because the couple had received a negative prenatal diagnosis. Told their baby would die soon after birth, the couple had been convinced they had very little choice in the matter.

A sidewalk counselor suggested they find out more about their options, referring them to the Rockville Women’s Center. The couple received an ultrasound at the center and asked the center’s staff and volunteers to pray with them for the health of their baby.

Today, that baby boy is 3 years old and in perfect health.

“It has really been amazing to see how churches and individuals banded together,” Betsy Evans, Rockville Women’s Center’s executive director, said. “Clearly, everyone working on this relied on God for every step. It was humbling to see so many personalities, so many different denominations, so many different sizes of churches be unified in eliminating this abortion facility. There was such a spirit of cooperation.”

Evans said her center regularly saw clients from Carhart’s office through the Coalition’s work. With the clinic closed down, her team is celebrating the closure of what she called “the most horrific aspect of the pro-abortion movement.” They’re also expecting to continuing seeing women who are on the brink of resorting to abortion, providing each with compassionate help and informed choices.

Now that Carhart’s clinic has been bought out—the new owner plans to repurpose the building for healthcare—the Coalition plans to close down Germantown Pregnancy Choices at the end of October, Glenn said.

While Carhart is out of business in Germantown, he has told the Washington Post that he’s committed to reopen his deadly practice—which has sent at least 10 women to the hospital in ambulances and killed two women—in Maryland. When and if he does, a 2012 Maryland law will require him to open publicly as a state-licensed surgical abortion facility, allowing the Maryland Coalition for Life to strategize and bring life-affirming choice to women in his new location.

Meanwhile, Glenn and the rest of the Coalition are continuing to pray for the thousands of women and men whose lives have been affected by Carhart over the years. They’re also praying for Carhart himself.

Tweet This: How LeRoy Carhart's #abortion biz united the #prolife community in #maryland.

“It’s always in my prayer that not only will Carhart stop performing abortions, but that he would truly have his eyes open to see that what he’s doing is wrong, and that when he comes to that realization, he would then turn to Jesus and realize he’s a sinner in need of God’s grace,” Glenn said.

“We’re thankful he’s done in Germantown for now, thankful that we can take a little break and get rejuvenated, but we’re still going to keep praying for him and his wife, and for the workers, that they’ll have a change of heart and not only stop doing abortions, but turn against abortion as well.”