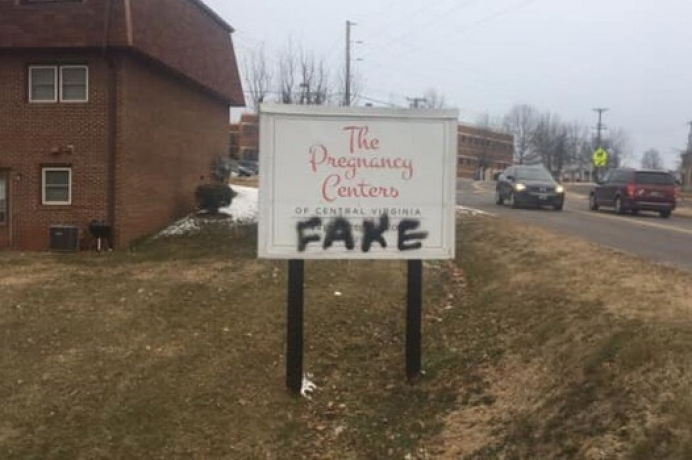 Big Abortion and the Infantilization of Women

Last Friday, the Democratic Party’s abortion radicalism finally spilled over into an act of vandalism at a pro-life pregnancy help center in northern Virginia. There, on the center’s signage, red spray paint told the lie the abortion lobby has peddled against pro-lifers for the last five decades: “You hate women.”

Another message said, “Fake,” and another said, “Jesus hates this sh#t.”

The 24,000 women served by The Pregnancy Centers of Central Virginia would probably disagree. Not because they’re partisan or religious or have any stake in the abortion debate, but because they’ve born witness to the love and compassion carried out by these Christian centers for the last 30 years.

And nothing says “hate” like free pregnancy tests, ultrasounds, and diapers, right? 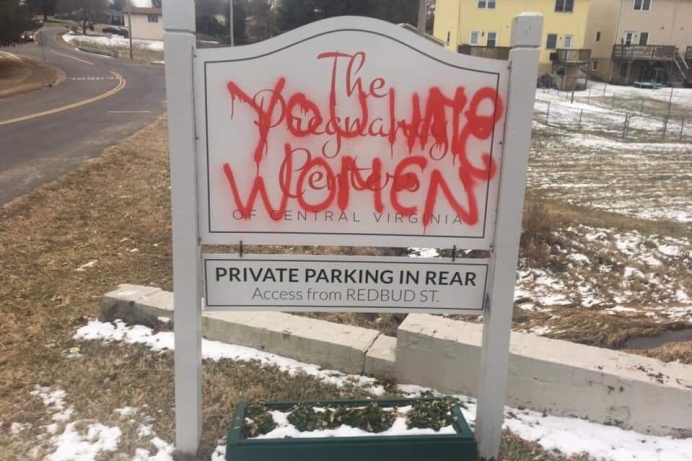 The act of vandalism, committed in the wee hours of Friday morning, came just days after Virginia Delegate Kathy Tran’s admission that her bill would allow abortions all the way through active labor. Although that bill was defeated, others in Vermont, Rhode Island, and New Mexico aim to follow the same path as the radical late-term abortion law signed by New York Governor Andrew Cuomo last month. With the onslaught of such bills, the need for life-affirming pregnancy centers is all the more critical.

Yet Democrats and Big Abortion have hammered away at these safe havens for decades, running sham investigations and targeting centers with unconstitutional mandates, one of which was struck down by the Supreme Court last summer. The smear campaign has stoked protests at centers and other acts of vandalism as well.

The ultimate impact of these efforts is to diminish women to a shriveled version of themselves, deceived into believing the lie of abortion.

In their mad attempts to quash any and all pro-life efforts to serve pregnant women, the abortion lobby continues to vilify pregnancy centers, repackaging their charitable services as the deceptive tactics of “fake clinics” that are pretending to be abortion centers. Contrary to their “pro-woman” claims, the whole strategy infantilizes women, reducing them to passive actors who are too incompetent to know the difference between actual help and a profit-driven abortion outlet.

And the ongoing efforts to legalize abortion through all 40 weeks of pregnancy follow this same harmful narrative.

Consider this from a little-publicized moment in abortion advocacy last week when a Rhode Island political couple brought their seven-month-old baby to the statehouse to push another late-term abortion law. Defending the barbaric measure, Stephanie Gonzalez, fiancée to Providence Mayor Jorge Elorza, said:

Seven months ago, I gave birth to a little human ... I was very lucky though. I was not living in poverty. I had access to health insurance. I felt comfortable where I was professionally. I wasn’t a victim of inter-relationship rape or abuse. I had a supportive partner. I didn’t have to worry about paying for child care.... Had my circumstances been different, I don’t know that I would have made the same choice.

“What bothers me most about the anti-abortion argument is that we seem to assume ... that women just can’t be trusted to make decisions for themselves and their bodies and therefore we must legislate for them.... This is sexist ... insulting.”

What is actually sexist and insulting is the notion that the only way to “help” a poor, jobless, and abused woman is through legalized third-trimester abortions—practical infanticide. Gonzalez’ statement is the epitome of “privilege,” an oft-decried boogeyman of the left. While her son may have been “lucky” enough not to be aborted (thank God), what a terrible fate for every other child whose mother didn’t happen to live in the right zip code or have the right pedigree.

Tweet This: "What is actually sexist is the notion that the only way to 'help' a poor and abused woman is through third-trimester abortions."

Abortion, of course, offers no long-term solutions to any of these challenges. It doesn’t remove a woman from poverty and it doesn’t erase her scars; it only removes a child and leaves more scars on her heart.

But pregnancy help centers do address these problems, working with women throughout all nine months of pregnancy and often years after. In 2017, these centers served nearly 2 million women, men, and children with free services, an estimated community cost savings of $161 million.

Through parenting classes, material support, and community referrals, these centers empower women to be the mothers they were made to be.

The lie that pro-lifers “hate women” is no more than a three-word partisan quip made by those unwilling to offer the hope and light of true, life-affirming choice.