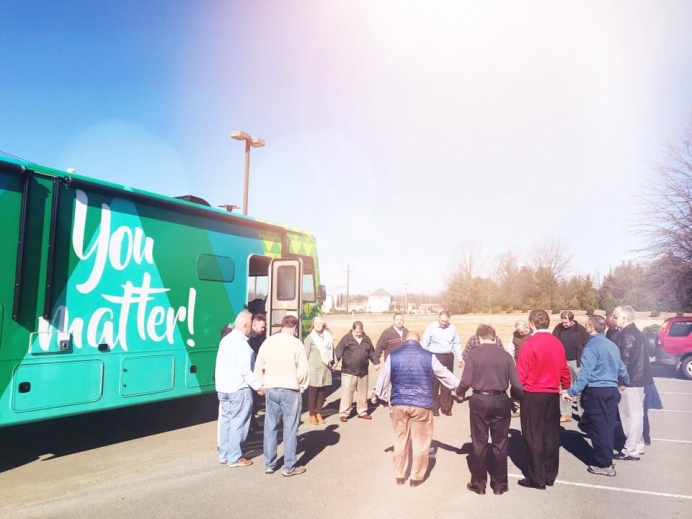 Volunteers and staff pray to dedicate HELP's mobile ultrasound unit, which they would use to save Kaitlyn's baby's life. Photo Courtesy: HELP Pregnancy Center

Have APR, Will Travel: How This Mobile Crew Helped a Mother Save Her Baby

It was near midnight one Friday evening in March when Kaitlyn* made a desperate phone call. She had taken the first pill of the two-pill regimen for a chemical abortion, and was looking for a way to undo it.

At just eight weeks into her pregnancy, Kaitlyn had already gone through a range of emotions. Though she was happy about her pregnancy, she was scared. The timing didn’t seem right, and her hopes for her future seemed to be falling apart.

Discouraged, she eventually set up an appointment for an abortion. She missed it, but then chose to reschedule. The second time, she went to her appointment and took the abortion pill.

As she and her boyfriend left the abortion facility, they caught a glimpse of a sign carried by a sidewalk counselor with information regarding Abortion Pill Reversal (APR). The next night, they found information online about the treatment and placed their call to the APR hotline (877-558-0333, AbortionPillReversal.com).

“Let’s get the ultrasound and go.”

Kaitlyn was in tears. After listening to Kaitlyn and her boyfriend’s concerns, the APR phone operator connected them to Courtney Parks, a local nurse from HELP Pregnancy Center near Charlotte, North Carolina. The next morning, Parks and Kaitlyn quickly set up an appointment for an assessment aboard HELP’s ultrasound mobile unit. Before the appointment, Parks enlisted the help of a local sidewalk counselor, Vicky Kaseorg, to counsel Kaitlyn.

In actuality, the plan would prove more complicated than that. Kaitlyn wouldn’t get off work until much later that evening. Over the course of the day, Parks, Kaseorg and Kaitlyn would go back and forth, trying to devise a new plan to get Kaitlyn the help she needed.

“We were just like, the longer this goes, the less chance this baby has,” said HELP’s sonographer, Kelly Byrum, who eventually joined Parks and Kaseorg in their quest.

With Abortion Pill Reversal, time is critical for saving babies. Although it is recommended that women begin the protocol within 24 hours of taking the first abortion pill, a number of babies have been saved within as much as 72 hours. That Saturday, Kaitlyn would be coming up on 48.

Byrum quickly determined that if Kaitlyn couldn’t come to them, they would have to go to Kaitlyn.

“And then it dawned on me,” said Byrum. “We had a laptop ultrasound unit on that mobile unit. I said, ‘Let's get the ultrasound and go.’ So at that point, that decision was made. We were like, ‘Yeah. Let's do it.’”

“This baby sure wants to live!“

Saturday evening, Byrum, Parks, and Kaseorg scrambled to gather all they needed to make the 45-minute trip to Kaitlyn’s workplace. Byrum called one of HELP’s medical directors, Dr. Matt Harrison, one of the two doctors who pioneered the Abortion Pill Reversal Protocol. He advised her to start the reversal immediately.

Early the next morning, Kaitlyn arrived at HELP once more to have an ultrasound.

Kaseorg, the sidewalk counselor who was present throughout the weekend’s events, recounted the moment on her blog:

“I think we all were holding our breath as Courtney started the ultrasound scan,” writes Kaseorg. “We all stared in breathless silence at the ultrasound screen as the picture of the sac and the baby materialized on the screen. Even I, untrained in sonography, saw the beating heart pulsating in the little baby’s chest. I wanted to scream with joy, but Courtney the nurse had to make all medical declarations first.” (Emphasis hers.)

‘There is the baby’s heart...as you can see... beating,’ said Courtney.

‘It’s alive?’ the woman asked, tears in her eyes, ‘Oh my. This baby sure wants to live!’

One week after the reversal, Kaitlyn and her boyfriend returned to HELP for another ultrasound to check the status of their baby.

“Almost immediately, we saw the beating heart,” writes Kaseorg in a follow-up post. “Courtney whispered, ‘It’s beating.’ Then she hugged me. We had a LOT of love and emotion and effort invested in this baby. A good strong heartbeat,  a week’s worth of growth, and the little baby was moving about.”

To the delight of Kaseorg and her companions, they were able to partake in yet another momentous event in the young couple’s lives: A proclaimation of their Christian faith.

“The couple was eager to commit their lives to Jesus at that point,” writes Kaseorg. “They had seen a bona-fide miracle of God in the life of their baby, and they saw no good reason not to proclaim Him as Lord and seek to live for Him from that moment forward.”

Kaitlyn’s is just one of hundreds of Abortion Pill Reversal success stories. For HELP, which began offering APR one year ago, it’s a first. Although women had called the center seeking APR in the past, none had followed through.

Since APR officially began in 2012, the regimen has been credited with saving over 400 babies.

The treatment works by giving women extra progesterone, a natural hormone that is necessary to sustain a healthy pregnancy. The abortion pill, mifepristone (or RU-486), blocks progesterone, essentially starving the pre-born baby of nutrients. Since the 1950s, progesterone has been used as a safe medical intervention to fight miscarriages. Today, it has the longstanding approval of the FDA.

Dr. Matt Harrison, the North Carolina physician who helped develop the APR protocol beginning in 2007, oversees the center’s prenatal clinic and APR program. He has been instrumental in implementing the program at pregnancy centers along the east coast.

“Abortion Pill Reversal offers a second chance to women who change their mind after taking the abortion pill,” Dr. Harrison told Pregnancy Help News. “Our reversal protocol is safe, effective, and over 350 healthy babies have been born with another 100 on the way to moms that have chosen to reverse their abortions. We have over 400 providers and have reversed abortions in 15 countries. Our overall success rate is 56 percent, but with proper use of our pill or injection protocol, our success rate reaches 68 percent!”

Since the rise of Abortion Pill Reversal, abortion activists and left-wing pro-abortion media outlets have dismissed the treatment as “junk science” and “dangerous.” But for Kaitlyn and hundreds of women like her, the science is very real—and meaningful.

Tweet This: How this woman stopped her own #abortion, saved her baby's life through Abortion Pill Reversal. #APRSavesLives #Prolife @ktafranklin

Shortly after seeing her baby for the second time, Kaitlyn texted a video of the ultrasound to her mother who lives in another country, announcing her pregnancy.

“The mom told us that her mother was so excited and happy,” Kaseorg told Pregnancy Help News. “And then she thanked us again for being there and for helping them. The boyfriend told us that he didn’t know people like us existed and it gave him so much hope for humanity. I told him we were all people who love God and knew God’s love for the unborn baby and that He is clear in his commandments that we are to help others when it is in our power to do so. I told them it was a privilege to be a part of this incredible miraculous story.”