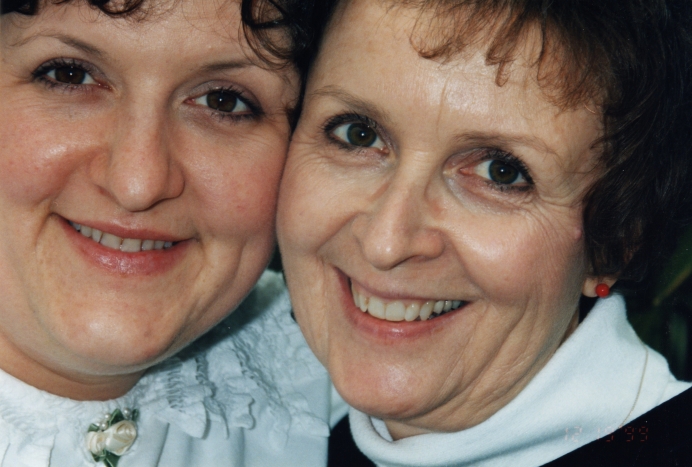 That July day, Kay and her daughter embarked on separate journeys.

Thirty-two years would pass before those journeys intersected on a lawn in Lawrenceville, Georgia.

The Former Face of Adoption

“In that era, having and raising a child out of wedlock was a horrible stigma on a family,” Frost said. “So the solution was to go away somewhere, have the baby and come back and pick up where you left off.”

Frost had left off during nursing studies at Arizona State University. She had postponed that pursuit to work as a nanny for wages credited toward a one-month stay at the Florence Crittenton Home for unwed mothers.

Arizona Children’s Home then took responsibility for finding an adoptive home for Molly Kay, while Frost was left to transfer to a new college and resume her studies and her life, alone.

“I felt the only way I could let go of my baby was to not hold her after she was born and to shut down my emotions,” Frost said. “And that’s what I did. I left part of my heart there with her and was determined to move on with what was left of me.”

Move on she did, eventually marrying and having two more daughters, Emily and Kendra. In the years that followed, she and her family moved several times. And though she dutifully reported her changing whereabouts to the adoption agency—“just in case she ever wanted to find me,” Frost said—time seemed to have severed all ties to her first daughter.

While Frost had always thought of her daughter as Molly Kay, her adoptive parents named her Nancie. An older couple who had walked through the heartbreak of miscarriage, Nancie’s parents encouraged both she and her brother—also adopted—to grow in their unique giftedness.

With the aid of art lessons, she developed her talents in hand-lettering, calligraphy, painting, and even award-winning metal sculpture. And though Nancie’s parents never hid the fact that she was adopted, she struggled with a perceived lack of connection to them.

“I grew up knowing I was chosen,” Nancie said. “But as a teenager, I went through an intense time of feeling rejected.”

Little did she know that hundreds of miles away, an aunt in her birth family was experiencing an equally intense burden to pray for the niece she had never met.

“God was really working on both me and my birth family, irrespective of our not being together,” Nancie said. “He had his finger in both our worlds.”

Nancie went on to marry and start a family in a whole new state, unaware that her adoptive mother was about to open a window to the past—and a door to reunion.

Lacking sufficient information about her history, Nancie had failed in early attempts to locate her birth family.

“For some reason, my adoptive mom didn't tell me all the details of my adoption,” she said. “So I didn't think she had any.”

During one holiday dinner in 1999, however, the details came pouring out.

“It sent me straight to the internet,” she said. “Within three days, God put me right where I needed to be: a bulletin board that someone in Arizona had set up to help adoptees and birth parents search and connect with each other.”

Ten years earlier, Frost had initiated a search of her own, inspired by her older sister’s success in finding a daughter she too had placed for adoption. But Frost’s efforts proved fruitless—and too expensive. She decided it would be better to leave it all up to the God, in whom she had come to trust.

Frost’s newly reunited niece, Holly, offered to take up the search for her missing cousin. Frost shrugged and let her try. From Kentucky, Holly entered Frost’s data into the same Arizona bulletin board service Phillips was using from her home in Georgia.

One December day, Nancie spotted that inquiry, in which the story matched hers exactly. Strangely, the person inquiring was listed as a cousin.

She contacted the bulletin board gatekeeper.

“Within a few moments the gatekeeper sent me an email back saying it sounded right, and she gave me some contact information,” Nancie said. “Then it was a crisis. I thought, ‘What do I do? Should I call this person? What will they say?’”

Nancie took a deep breath and made the call.

Soon, both women were convinced they were indeed long-separated cousins. Before hanging up, Holly had one warning for her cousin: “Kay's real religious; she's born again.” Nancie, who had come to the same faith herself apart from her adoptive parents, was delighted.

Faith was to prove another—and the deepest—connection birth mother and daughter would share.

Hours later, Frost was out doing some Christmas shopping when she received a call from her daughter, Kendra.

“When I heard the words, ‘Mom, Holly has found Nancie. You have to go home right now and read your email!’ I just dropped to my knees in the middle of the store and cried,” she said.

Her daughters, who had long known they had a half-sister who had been adopted at birth, both gathered around the phone when Frost called their older sister for the first time.

“Nancie's first words to me were, ‘Thank you for my life. I would like you to meet your three grandchildren,’” Frost said.

One long and excited conversation later, they had plans to meet in Georgia.

If either woman or their children harbored any doubts about their relationship, those disappeared when the two met on Phillips’ lawn in Lawrenceville, Georgia.

“The moment I met them, I just looked at my mama and said, ‘That's my mom!’” Phillips said. “My sisters said, ‘Wow, you look so much like her!’”

From that day, the two portions of one family have woven themselves together. Frost’s grandchildren—then elementary school age—were as delighted to have a grandmother as Frost’s younger daughters were to have found their sister.

And Nancie at last met her maternal grandmother, whose unspoken sorrow over letting “Molly Kay” go finally melted away.

Months after this life-changing meeting, Frost became nurse manager at Assurance Care, a pregnancy center started by her church in Lexington, Kentucky.

“That's when I realized how powerful a testimony is,” Frost said. “When you've walked through something, people's ears open up.”

Starting with the first abortion-minded woman who heard her story, Frost saw countless women choose adoption instead during the 17 years she served with the pregnancy center.

Nancie, looking back over a lifetime shaped by the pros and cons of adoption, challenged adopted children—especially teens searching for identity—to see the choices their mothers made as part of a bigger picture.

“Your story’s not over,” she said. “We make choices, but we don't see what God can make out of them. He sees the end from the beginning. That's why we need to trust Him. He can make it way more beautiful than you expect. Don't second-guess God. He can use everything.”