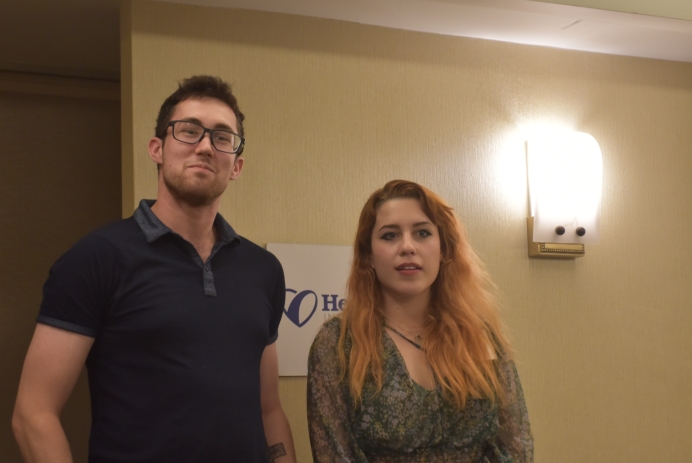 Chris and Manuela at Babies Go to Congress Lisa Bourne

A family on the line; a dad has his say on abortion pill reversal

Manuela and Chris’s two-year-old son Oliver was saved after Manuela had a successful abortion pill reversal. The couple could not be happier to have Oliver, and they were also happy to share their story with the recent Babies Go to Congress initiative in Washington D.C., including Chris’s perspective as a father desperate to save his son from chemical abortion.

Chris and Manuela were not prepared when they learned Manuela was pregnant, and felt they had to choose abortion.

Manuela searched online for a way to reverse the effects of the abortion pill and she found Crossroads Pregnancy Center through the Abortion Pill Abortion Pill Rescue® Network (APRN).

The pregnancy help center was able to confirm for Manuela and Chris that their baby still had a heartbeat and helped them to begin the APR protocol.

“And it worked,” Manuela said. “And Oliver’s here with us and we couldn’t be happier.”

Abortion pill reversal (APR) consists of prescribing progesterone, the natural hormone in a woman’s body that sustains pregnancy, to counter mifepristone, the first of the two drugs in the chemical abortion regimen.

Heartbeat, the largest network of pregnancy help in the U.S., manages the APRN, which administers APR through roughly 1,100 providers worldwide, who are reached through the APRN hotline.

Chris and Manuela were part of the latest group to take part in Babies Go to Congress, bringing Oliver to Capitol Hill where he stole hearts and was instrumental in one Congressional lawmaker learning firsthand by meeting him in person that APR saves lives.

Following the day of visits with staff and Members of the U.S. House and Senate, Babies Go to Congress participants gather for a luncheon where they share their experiences with the various meetings.

Manuela said the day on Capitol Hill went very well, and both she and Chris were happy to be able to share about the abortion pill reversal process.

“That's what saved our baby,” she said. “And we know it's going to save so many more babies and that's what we're hoping for.”

But Chris struck a chord when sharing his perspective of their experience seeking help with trying to reverse the chemical abortion and save their son.

“When we started, when we had that regret of taking the first dose, we called Planned Parenthood,” Chris said. “And they literally said, ‘That's it, it's done. You made that choice.”

Chris recounted hearing kids in the background over the phone with the Planned Parenthood representative and it struck him how the abortion staff member was dismissive of their situation.

The couple kept searching for help to save Oliver after being turned away by Planned Parenthood.

“And you know, if it wasn't for us doing that research, we would've never found, the help we needed,” Chris told the Babies Go to Congress gathering of their finding the APRN.

“And there's so many women that they just call that Planned Parenthood hotline. And they say, ‘That's it.’ And they just give up without knowing this (the availability of APR),” he said.

“How many babies could have been saved?” Chris asked.

Tweet This: "It's not your family on the line” - APR dad speaks about Planned Parenthood saying his girlfriend's chemical abortion could not be reversed

“That's what we're hoping to get through,” Chris said.

Heartbeat has taken almost 200 moms and babies to nearly 400 Congressional offices since 2009 with the Babies Go to Congress effort.