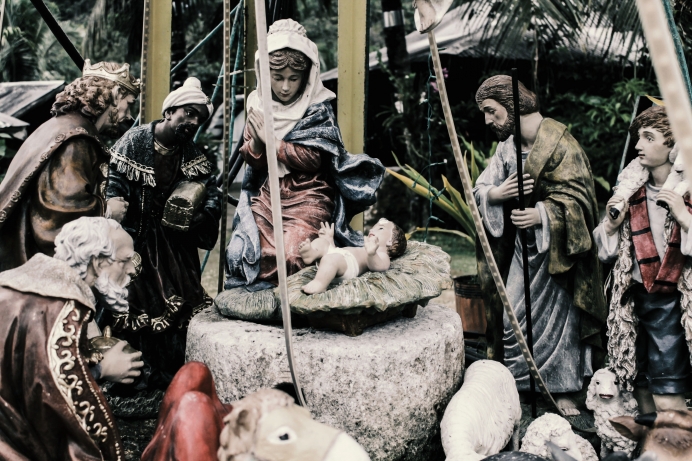 It started out as an ordinary day in the backwater town of Nazareth—but once the angel showed up, Mary’s life took a dramatic turn for the extraordinary.

She’s going about her business when Gabriel comes to her and says, “Greetings, favored woman! The Lord is with you.” (Luke 1:28).

I don’t know the details of the archangel’s physical appearance, but I have no doubt he looked awe-inspiringly powerful.

That’s why the next thing Gabriel utters is, “Do not be afraid, Mary…”

The Bible records numerous encounters between humans and angels. It seems the first thing people always need to hear is, “Don’t be afraid!” sometimes followed by, “No, don’t worship me, I’m not God!”

So it’s not surprising Mary is troubled at the strange greeting she receives.

After offering the typical reassurance to not be afraid, Gabriel addresses her by name and explains her role in God’s redemptive plan.

“…you have found favor with God.  Now listen: You will conceive and give birth to a son, and you will name him Jesus.  He will be great and will be called the Son of the Most High… and his kingdom will have no end.” –Luke 1:30-33

Like every Israelite, Mary has grown up hearing of the prophecies of the coming Messiah, the One who would set her people free.

But before she can even process the shocking notion of being chosen to carry, bear and raise the Promised One, she blurts out the most important question on her mind.

“How can this be, since I have not had sexual relations with a man?”

It’s a fair question. No child in the history of mankind had ever been conceived without a man and a woman coming together sexually.

Gabriel responds, “The Holy Spirit will come upon you, and the power of the Most High will overshadow you. Therefore, the holy one to be born will be called the Son of God.”

He reminds her of the miracle of her cousin Elizabeth, once barren, now six months pregnant and concludes, “For nothing will be impossible with God.”

We know the rest of the story—Mary positions herself as the Lord’s servant and accepts His word to her.

However, do we really understand what’s at stake?

Consider the scene later on when the Pharisees drag a woman caught in adultery to Jesus, hoping to trap him into condemning her (John 8:1-11). They’re ready to stone her to death for the deed.

Jesus not only side-steps their trap; he also frees the woman from their clutches.

Back to Mary: she knows the penalty for adultery according to Mosaic law.

Her mind races. Who will believe the tale of an angel’s proclamation and a Holy-Spirit conceived pregnancy? Is her future an angry mob hurling sharp rocks at her until she dies?

If not that, can she face the local rumor mill? The whispers, the looks, the undeserved burden of shame?

And what of Joseph? Even if he doesn’t turn her in, what will happen to their relationship?

For Mary, this pregnancy is not just unplanned; it’s downright dangerous.

She stands to lose her reputation, her fiancée (and with that, her means of provision), and even her life.

One beautiful aspect of Mary’s story is the way her faith shines.

Instead of allowing fear and doubt to drive her decision-making, she steps out in obedience to God, trusting He will bring His will to pass—and that He’ll protect her in the process.

The same can be said for Joseph, unsung hero of Scripture. Against seeming evidence of unfaithfulness on Mary’s part, Joseph chooses to believe her out of trust and obedience to God.

He says yes to the supporting role of earthly step-father to the Messiah—and what a critical “yes” that is!

There’s another, even greater truth to be discovered in this story of one couple’s unplanned pregnancy as well.

From Mary and Joseph’s perspective, everything about this situation is unexpected.

Though they’re the only couple in history whose baby is conceived by the Holy Spirit, in every other way, they represent the folks who come through the doors of pregnancy centers on a regular basis

Shaken. Vulnerable. Wondering what to do next.

From God’s perspective, however, Mary’s pregnancy is anything but unplanned.

Since the Garden of Eden, He’d promised to send One who would reverse the curse of sin and make it possible for mankind to be reunited with the Father.

Over the centuries, He speaks time and time again through various prophets with pinpoint accuracy about the circumstances of the coming Savior’s birth, life and triumph over death.

This pregnancy may have seemed to come out of nowhere to an unsuspecting couple, but God had a plan—a grand, sweeping, overarching plan to rescue the lives of countless people around the world through one very special Child.

Yet from God’s perspective, there’s no such thing as an unplanned pregnancy.

It wasn’t only Jesus whose destiny God planned. He creates, loves and intimately knows each image-bearer ever conceived, no matter what the circumstances (Jeremiah 1:5).

Tweet This: God creates, loves and intimately knows each image-bearer ever conceived, no matter what the circumstances

Who are we to say which persons should live or die based on their parents’ circumstances during their gestation?

What pregnant woman (besides Mary, of course) has any idea of God’s plan for the unborn child she is carrying?

Mary and Joseph’s story teaches us something important about faith in a trustworthy, sovereign Lord.

Whether planned and expected by human parents or not, every child is perfectly planned by God.

That’s why the life-affirming mission matters—at Christmas and all year long.