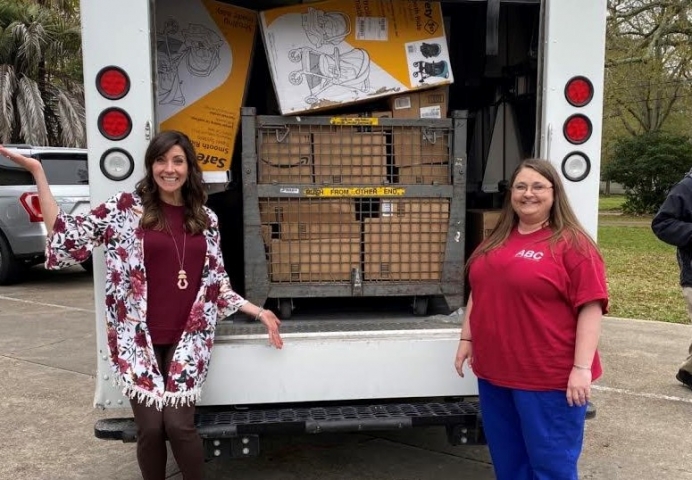 ‘What is all this stuff?’ - Pregnancy center blessed by 1,200 gifts from conservative commentator’s registry

When “Shana” delivered her baby recently, all Becky Girola wanted to do was head to the hospital to see the new mama and hold her tiny newborn.

But because of COVID-19 restrictions at the Louisiana hospital, Girola couldn’t do that. Instead, she delivered a slew of major gifts to the hospital, including a carseat and a stroller--big ticket items for the first-time mom.

Although Girola was disappointed not to see Shana, she was thrilled to be able to bless her with such gifts, especially after the journey Shana had been on. As executive director of the ABC Pregnancy Center in Lake Charles, Louisiana, Girola first met Shana when she came to the pregnancy center last August. At that time, Shana was considering an abortion.

But over the course of the next several months, things changed dramatically for Shana as Girola worked with her at the center, empowering her to choose life for her baby.

All the while, something major was happening at the center in terms of donations. Hundreds upon hundreds of gifts were being delivered to the center for moms just like Shana.

Those gifts--like the carseat and stroller Girola delivered to the hospital--were made possible by the generosity of a conservative commentator with a special passion for the pro-life cause.

“What is all this stuff?”

Allie Beth Stuckey, who regularly speaks on the pro-life issue on her podcast Relatable, has a history of inspiring generosity at pregnancy centers like Girola’s. Last summer, when she and her husband were expecting the birth of their first baby, Stuckey created an Amazon gift registry for a Texas pregnancy help center and promoted it on Twitter.

Along with a link to the registry, she tweeted, “"Many sweet followers have asked if I have a baby registry. As of today I do...but it's not for me!! Purchase any item on this registry & it will go directly to a pregnancy center in TX doing AMAZING work for expectant mothers & their babies. Thank you!"

A couple of days later, she posted an exciting update to her Instagram: a photo of a room packed with Amazon boxes. In the caption, she wrote, "Guys! Just 2 days after I posted the registry for the pro-life pregnancy center in TX, more than 140 packages arrived at their door. In these boxes were hundreds of prenatal vitamins, dozens of cribs, diaper bags, pacifiers, strollers and more for pregnant mothers in need."

"The packages continued to arrive for days," she added. "Thank you all for your generosity and for demonstrating what it means to be pro-life— caring for the mother and the child. You can still purchase or donate via the link in my profile. Happy Friday!"

Several months later, when her birthday rolled around in February, Stuckey decided she wanted to do the same for the ABC Pregnancy Center.

The decision wasn’t random. Stuckey had developed a special bond with Girola last November when Stuckey served as the keynote speaker at the center’s annual benefit.

When Stuckey texted Girola about the idea in February, Girola was touched. At Stuckey’s invitation, she added a few hundred baby items to the Amazon registry and thought that would be enough. Stuckey encouraged her to add more.

“I thought, ‘Ok cool, awesome, so we might get 100 things, no big deal,’” Girola told Pregnancy Help News.

Then, two days after Stuckey promoted the registry among her followers, Girola’s doorbell rang. It was 7 am, and Girola had yet to brush her teeth.

“I’m like, ‘Who in the world is at my house this morning?’” Girola recalled. “And I go to the front door and it’s the mail lady and she said, ‘Hi, ma’am, are you expecting a lot of packages?’”

“Well, my entire mail truck is to this address,” the postal worker said.

Stunned, Girola replied, “Well, it looks like you're gonna need some help.”

So together with her then-4-year-old son, Girola helped the postal worker unload the truck, filling her garage to the point that neither her nor her husband’s car could fit. Then the postal worker informed her, “This is just one of the trucks, there’s a lot more coming.”

With so many more gifts to come, Girola set up a plan with the postmaster and several volunteers to receive and store the gifts before transferring them to the center.

The day they started bringing the gifts to the center, Girola’s team was able to serve one mom on the spot. Her baby was just two days old.

“She was there getting some supplies and she was like, ‘What is all this stuff?’” Girola said. “So I was able to share with her just how much the pro-life community is there for her.”

After that, Girola’s team set the mom up with a new stroller, putting it together and tucking it into her car.

Tweet This: “That was neat to get to take care of her” Pregnancy ctr dir. after Allie Beth Stuckey's gift registry resulted in 1,200 gifts for clients

In the coming weeks, Girola’s center would help even more moms like her—now under special circumstances.

Indeed, just weeks after the packages began to arrive, the state of Louisiana would join the world in lockdown as healthcare systems geared up for a projected influx of COVID-19 patients.

With stay-at-home orders issued across the country, pregnancy centers became all the more critical as new and expecting moms were shaken by job loss, loss of childcare, and concerns with the virus itself. The pregnancy help community began to wrestle with the challenges of serving women while observing the social distancing protocols recommended by the CDC.

The ABC Pregnancy Center closed its physical location while maintaining contact with clients via phone as much as possible. For material assistance, Girola organized a pick-up system in the center’s parking lot. Thanks to Stuckey’s gift registry, there was plenty to go around.

“It’s crazy, the timing,” she said. “Because who would have known that we were about to be in quarantine and not able to service our mamas like we normally do.”

With essential items flying off the shelves at grocery stores, more and more moms were calling the center in search of diapers and formula.

“[They] would call and say, ‘We went to the store and they don’t have the type of diapers that I use or the type of formula, do you have this or that?’” Girola said. “And we’re like, ‘Oh, we got it all.’ So it was really great to have that stockpile right before the quarantine. We’ve been slowly but surely going through it.”

Now, some six weeks after Louisiana’s initial stay-at-home order, ABC Pregnancy Center is preparing to reopen with special precautions in early May. The center, which served over 2,100 clients last year, offers limited obstetric ultrasound, pregnancy tests, community referrals, and Earn While You Learn classes, all free of charge. It also serves as a Medicaid application center and is about to offer a postpartum support program to clients.

When the center reopens, services will look a little different as staff will wear gloves and masks full-time and the center will have to maintain an empty waiting room, taking clients by appointment only.

While Girola is disappointed by how “impersonal” it can feel wearing a mask in the consultation setting, she remains positive about the very personal impact that the generous pro-life community has had on her center, especially during these times.

“I tell everybody, if you’re a mom in an unplanned pregnancy there is no better place to live than Lake Charles, Louisiana ‘cause people just show up all the time like, ‘What do you need? How can we help you?’” she said. “It’s a really awesome place.”

And thanks to Stuckey’s registry, Girola has seen the breadth of the pro-life movement’s affection for pregnancy help centers across the U.S. Even now, weeks after the registry was first launched, her center continues to receive baby registry items from people all over the country. In total, the center has received more than 1,200 gifts.

“I love being a part of the pro-life community and getting to do what we do,” she said. “I mean, there’s definitely hard times, there’s hard situations and stories, but it’s stuff like this where you get to see the life-changing success stories and the turnaround that women have. It’s awesome that we get to witness that.”

Tweet This: “I love being a part of the pro-life community and getting to do what we do” - ABC Pregnancy Center Executive Director Becky Girola