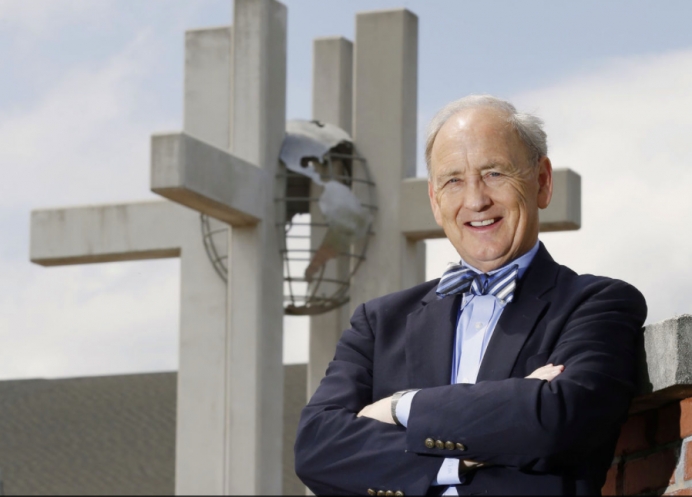 Don Roberts lived large, impacting tens of thousands of people before his death in September, 2017.

Want to Change the World Together? Let's Start Now.

On Labor Day, I, Jennifer and our two youngest boys were in line for a tour of the USS LST-365, a ship which carried 59 vehicles and 408 troops to land on Omaha Beach on June 6, 1944, D-Day. As we waited, a text popped up from one of my daughters—in class at Vanderbilt—asking, “Did Don Roberts just pass away?”

I checked Facebook and yes, the man who was my 6th grade PE coach and would later become a friend, a mentor, a boss and so much more, was gone. I called my other daughter who was at work to tell her the news; the former headmaster at her school, the man who drove 350 miles with his wife to attend her wedding, was no longer with us.

He was my boss during those six years as I worked at the school, and during that time, he made numerous accommodations to allow me to speak at pregnancy help center events. His encouragement gave me a chance to work myself out of a job with him and back into the pregnancy help community. And he supported me every step of the way.

It is not too much to say this man influenced not just me but thousands. I wrote a column for my web site Tuesday about what Don taught me, and within hours it was the most-read post ever, by a large margin.

While Don impacted so many lives while he was with us, there is something we in the pregnancy help community can learn from Don Roberts—though probably almost no one reading this ever met him: He lived life in the now.

Tweet This: What we can learn from a man who lived life "in the now." #prolife @KirkWalden

During a conversation with him one day more than 10 years ago, when he knew no sickness and was at the prime of his career, he told a story of a couple he knew, who kept waiting until retirement to truly “live life.”

“They saved and saved,” Don told me. “They were going to by an RV and start touring the country—after they retired.”

But something happened. “As soon as the husband retired, they found something wrong with him, and he was gone within six months. They never got to do what they were waiting so long for.”

Then, the lesson. “We decided we’re not going to let that happen,” Don said, pointing out that he and his lovely wife were going to live life in the present, not the future. “We want to get everything we can out of every day,” he told me. And they did.

If we had a long weekend at the school, he and his wife took off for the beach. In the summer, there was always a big vacation. During football season, they might go to a high school game on Friday night, then drive to Anderson, Ind., on Saturday, where his son was the field goal kicker for Anderson University.

They went to tons of weddings, loved to try out any new restaurant (he was an admitted “foodie”) and always found a way to connect with people.

I cried when I heard the news on Monday. But, I also celebrated because he lived a life of no regrets. Though his time was short, he left nothing undone. Don lived large.

We in the Pregnancy Help Community can learn from this man. Let’s ask, “What is it that we can do now, to change this world? How can we change her life, now? His?”

If we find an answer to one of these questions, let’s get out there and do it. Let’s serve in a big way. Let’s stretch ourselves to do the amazing instead of the ordinary.

If funds are not available to do the seemingly impossible, let’s go envision others. When they can see the possibilities instead of just the obstacles, they might just join us and give.

Let’s focus on turning the world upside-down instead of dwelling on those things which can discourage us.

We have a mighty mission in front of us; let’s not find ourselves doing too much waiting. Some waiting can be necessary; too much waiting keeps us from accomplishing what the Lord has for us.

Let’s ask one more question: “What is one thing our ministry can do today to make a larger difference in our community?” Once we get the answer, let’s do it.

My friend Don lived large and impacted the lives of literally tens of thousands of people. Each day, our ministries have an opportunity to do the same. Let’s seize the day, every day.