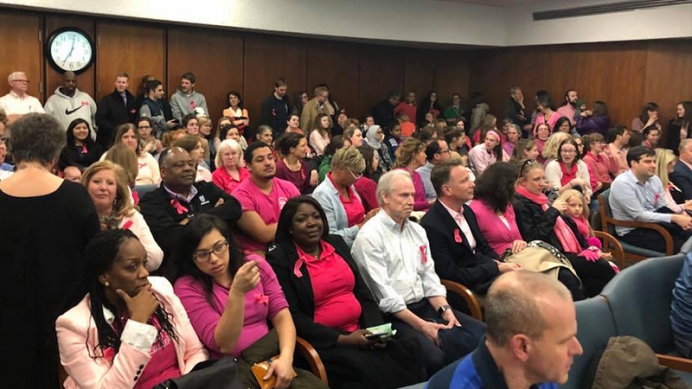 Monday night, a final effort to open a pregnancy center next to a proposed abortion facility failed when the South Bend Common Council fell shy of just one vote to override Mayor Pete Buttigieg’s veto.

Although the rezoning measure originally passed with a simple majority, 5-4, an override would have required a two-thirds vote—or at least six of the council members to vote in favor of it. Instead, council members stuck to their original votes.

According to the South Bend Tribune, supporters of Women’s Care Center, wearing pink ribbons, turned out in droves, packing the room and spilling out into the lobby on Monday evening.

Despite disappointment at the final result, Women’s Care Center is plowing ahead in earnest to serve families in their community.

“We are sad that care for women and families in South Bend got caught in politics,” said Jenny Hunsberger, vice president of Women’s Care Center in South Bend. “Although this is a setback, Women’s Care Center continues to serve. The 73 women in this community who walk through our doors today will receive compassionate and skilled care without judgment.”

Women’s Care Center, which has 29 locations in 10 states, has been serving women, men and children across the U.S. for the last 34 years.

With their current South Bend locations bursting at the seams, the organization initiated the process of opening a new location.

According to Ann Manion, president of Women’s Care Center, right now, 1,438 babies are expected to their clients in South Bend and Mishawaka, a neighboring city. Furthermore, she says, two out of every three babies born in South Bend start with their centers.

In January, the Indiana State Department of Health denied its application for a license. While Whole Woman’s Health Alliance, the group behind the abortion facility, is appealing that decision, the appeal is not guaranteed success.

If the appeal does succeed and the facility opens, South Bend women will miss out on a last-minute alternative to the harms and heartache of abortion. If the appeal fails and the abortion facility never opens, Buttigieg’s veto and rejection of a pregnancy center in this neighborhood was all for nothing.

Though it is difficult to see this conclusion as anything but a loss for women and Buttigieg’s veto as anything but a rejection of a woman’s choice to carry her baby to term, Women's Care Center's persistence in serving women and children—by the thousands—will surely leave a far bigger and lasting impact on the city of South Bend.