This is What 25 Years Spent Saving Lives Looks Like

For Nancy Peterson of Robbinsdale, Minnesota, some of the biggest revelations have happened on the sidewalk right outside an abortion clinic.

“I want you to open a place where these girls can go before they come here for an abortion," Peterson heard an audible voice say. When she realized no one else praying on the sidewalk with her had spoken or heard the words, she knew she’d been given a mandate from God.

And for over 25 years, that mandate to provide an alternative to abortion has guided Robbinsdale Women’s Center, which Peterson and her husband Gordon launched in 1992, directly across the street from Minnesota’s busiest abortion clinic, Robbinsdale Clinic.

When the abortion facility learned Peterson’s pro-life organization would be renting space within yards of its entrance, it took the pregnancy center to court. However, lacking any legal grounds for preventing the center from opening—or from bearing a similar name—the abortion clinic could only lobby for laws that restricted other pro-life ministries from blocking access to their building.

“We opened in 1992 with three rooms, a folding table, a telephone, and a couple of folding chairs.” said Peggy Benicke, who volunteered early in the center’s history and became executive director in 2000.

“We didn't have supporters,” said Joanne Eklund, the center’s operations director. “We really relied on the Lord for every single bill being paid.”

In those early days, Eklund recalled, many churches hesitated to support pregnancy centers, leery of entering the fray of pro-choice and pro-life protests.

“We had different kinds of opposition, lots of things that could have closed us down,” Eklund said. “But they never did. Steadily we grew into a trusted resource for women experiencing an unplanned pregnancy.”

Six years later, the center was ready to become a permanent fixture in the community. Its growing base of supporters raised enough money for the center to buy their entire three-level West Broadway building outright.

A businessman in the building next door wrote to the property owner, protesting the sale because he associated the center with the protests he had witnessed across the street at the abortion clinic. Despite his protests, Robbinsdale Women’s Center secured their purchase and soon filled all three floors.

Eventually, after 15 years of praying for still more space, the Robbinsdale Women’s Center bought the businessman’s building, too, thanks to a donation from a faithful supporter that came as a complete surprise. 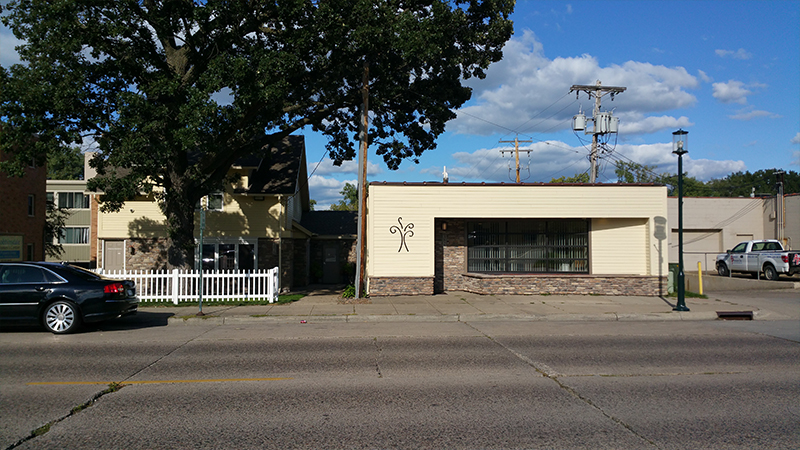 “A donor came in one day and said he felt called to give big,” Benicke said. “He asked, ‘How can I bless you?’ I told him, ‘See that building next door? We want to buy it.’”

The assessed price, it turned out was exactly the amount he had felt led to give.

Through the matching donation he created, the center purchased the building and paid for all the badly-needed renovations. In April 2016, administrative staff moved into the new building, making space in the original building for twice the number of counseling and ultrasound rooms, as well as offices for client-facing staff, a volunteer coordinator and program manager who run the mentoring and material aid programs.

As the ministry grew through the years, Robbinsdale Women’s Center explored a variety of community-serving programs. Along the way, however, the center’s leadership learned to scrap any new endeavor that failed to align with their original mission to reach those most at risk for abortion.

“The biggest turning point for this ministry occurred when we got our first ultrasound machine in 1994,” Eklund said. “That was huge. Now women could actually see their babies. They weren’t ‘blobs of tissue’ anymore.”

That used ultrasound machine, operated by a doctor who volunteered her time a couple of evenings a week, made Robbinsdale Women’s Center the first pregnancy center in Minnesota to offer life-saving ultrasounds to abortion-bound women. Today that service is available six days a week.

From there, expanding to offer mobile ultrasound seemed only logical. But when Benicke’s team realized their new mobile ultrasound unit often stood useless during Minnesota’s frigid winters, they reconsidered that move.

Eventually, the Robbinsdale center sent their mobile unit down to Baton Rouge, Louisiana, where another center had lost everything to a hurricane.

“I've heard from the director that hundreds of babies have been saved as a result,” Benicke said. “It was all part of God's perfect plan.”

“About 12 years ago I had noticed a significant drop in the numbers of abortion-minded women who were walking through our doors,” Benicke said.

Yet their mentoring program and their used-clothing closet for the public were both exploding through referrals from outside agencies. After praying together, she and the board decided they had been experiencing “mission drift.”

“The Lord didn't call Nancy Peterson to give things away, but to reach abortion-minded women,” she said. “So we enacted what we call our ‘80-20 policy’: 80 percent of all our resources are designated for reaching abortion-minded clients; 20 percent of them serve the rest.”

“As soon as we did that, we had a surge in abortion-minded women coming in, we had a record year of babies saved, and we received unexpected funding,” Benicke said.

Yet another course correction meant returning a $36,000 grant awarded to their center through Minnesota’s Positive Alternatives Act when it would have required the center to veer from their 80-20 policy.

“People thought we were nuts. But immediately, more abortion-minded women walked through our doors, and more unexpected funding came in,” she said.

On the other hand, the center’s use of new Real Time Prayer (RTP) text alerts has squared perfectly with their mission. Designed by the center’s medical director, Dr. Bill Turcotte, it allows a client advocate to text prayer partners with a prayer request when an abortion-minded woman is preparing for an ultrasound.

“The nurses have told me, when we get that prayer out before the ultrasound, the images are super sharp, the babies are active, and the moms react,” Benicke said. “It's really incredible what a difference it makes.”

Babies All Grown Up

Over the center’s 25 years, the babies saved in Robbinsdale have moved on toward adulthood. Some of those saved babies now have babies of their own, with more stories to tell.

Years ago a desperate woman named Wynona chose life for her fifth child, thanks to Robbinsdale Women’s Center. Last year, she spoke at the center’s banquet. At her side stood Samantha, that now-grown daughter, who had decided to preserve her own baby’s life when she saw an old newsletter from the center bearing her mother’s photo under the headline: “Your Prayers Saved My Daughter’s Life.”

Another former client named Manzaler has served a term on the board of directors. And another saved baby, Ariana, grew up to get married to a man who tearfully told Benicke, "Thanks for being there. If it weren't for Robbinsdale Women’s Center, I would never have met the love of my life—or the son that we’re expecting soon." 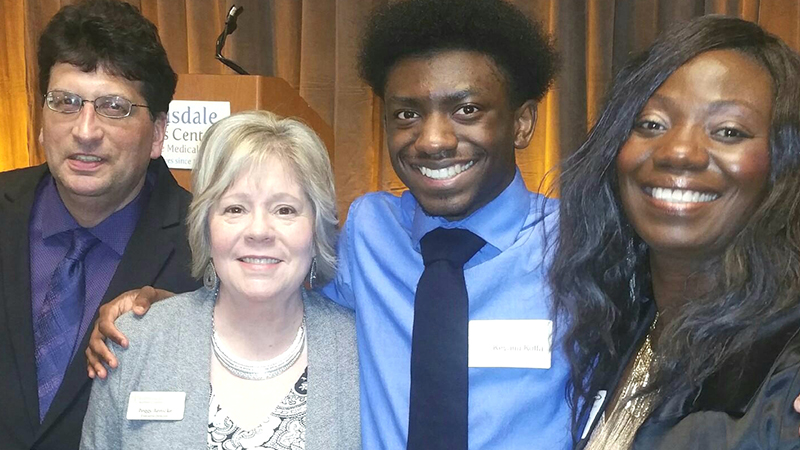 Manzaler and her son Keyanu with Peggy Benicke and her husband at the center's banquet this spring. Keyanu closed the event in prayer. | Photo Courtesy: Robbinsdale Women's Center 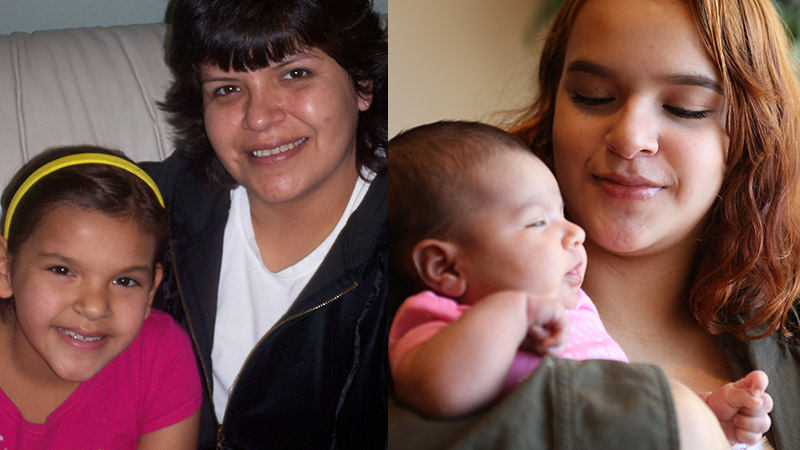 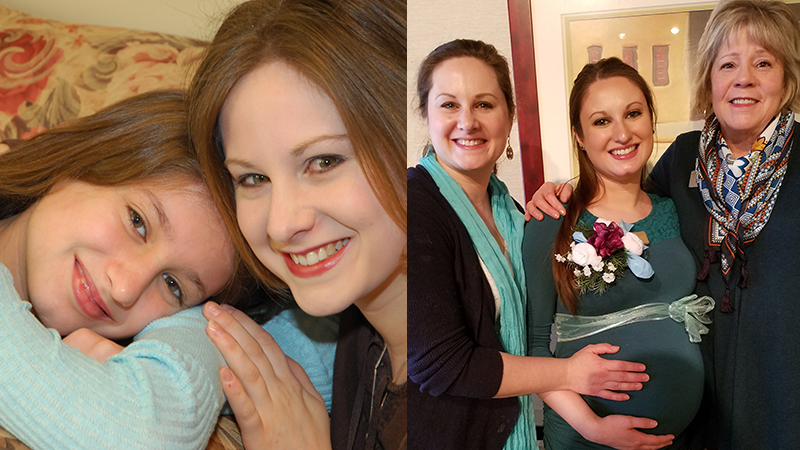