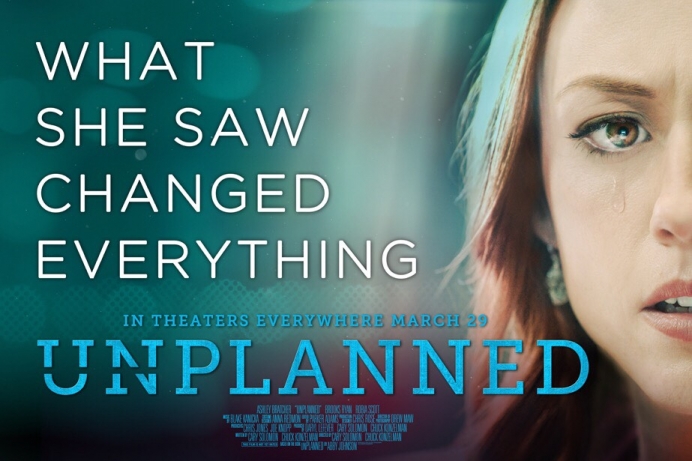 Unplanned is not a film to go see lightly. It certainly does not offer a fun cinematic experience, and it’s far from the kind of flick you’d enjoy over popcorn or nachos. But it is an important film, which is made painfully clear in the first seven minutes as Planned Parenthood clinic director Abby Johnson (Ashley Bratcher) watches a gruesome first-trimester abortion take place before her very eyes.

The film, which opens in theaters nationwide today, follows Johnson’s rise from clinic volunteer to clinic director, and her eventual pro-life conversion and spiritual redemption.

Based on Johnson’s 2012 memoir, the film’s true-to-life depiction of abortion earned it an R rating from the Motion Picture Association of America (MPAA) last month. Since then, many have pointed out the hypocrisy in our culture which allows a teen to have an abortion but prevents her from seeing a film about abortion.

But Johnson and the film’s producers have taken the rating in strides, refusing to cut the graphic scenes and embracing the MPAA’s categorization of the scenes as “violent.”

“We are pushing the boundaries of what has never been before on such a wide scale by showing America exactly what abortion is—and abortion is disturbing. It's violent," Johnson said.

Along with the opening scene, the film’s other graphic scene comes when Johnson endures the horror of a chemical abortion in her home bathroom. In an open letter to parents about the film’s rating, Johnson said, “In real life, I hemorrhaged so badly I thought I was going to die,” noting the movie captures her experience “without being gratuitous or gory.”

The depiction of abortion in Unplanned is jarring and raw, and will certainly convict (and re-convict) moviegoers of the evil of abortion.

But it is jarring. And it is raw. And it could very well move countless post-abortive women and women considering abortion into the doors of their nearest pro-life ministry. Not only that, it will hopefully send current abortion workers to Johnson’s own ministry, And Then There Were None, an organization which helps such workers to leave the abortion industry and find healing.

That’s why a screen at the end of the film prompts viewers to text HOPE to 73075 for resources on pregnancy help, abortion healing, and leaving the abortion industry.

In a recent Facebook post, Johnson shared with her followers that even before the film’s release, she’s already receiving contacts from workers seeking assistance:

“In the past four days, I have received three emails from women who previously worked in abortion clinics and are looking for healing resources. In their emails, they all stated that they watched the TRAILER for Unplanned and realized that they needed healing from their past in order to really deepen their relationship with Christ.

“They realized that just from the trailer!! God is about to shake up this country in a powerful way on March 29th!!”

While the film’s depiction of abortion has received the most ink in recent weeks, it’s this redemptive result which we’ll hopefully be seeing more of.

“[Unplanned] is about showing everybody that our pasts are redeemable” Johnson said earlier this month. “Not even just the issue of abortion, but anything that we’ve been through in our lives, God is ready to redeem that and to really use it for His glory.”

Tweet This: "@UnplannedMovie is about showing everybody that our pasts are redeemable.” - @AbbyJohnson #prolife