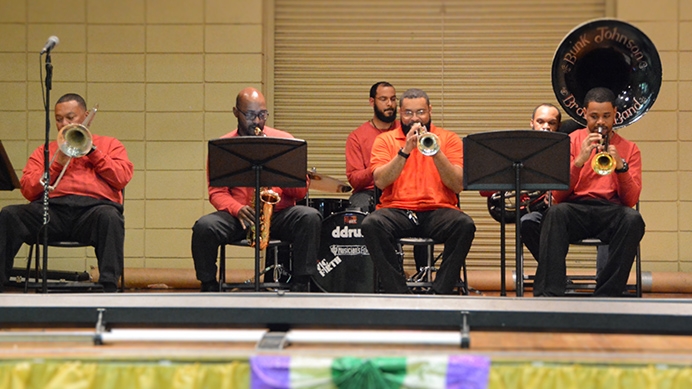 To introduce the Unexpected Pregnancy Center to the community of New Iberia, Louisiana, the center's board enlisted the musical stylings of the Bunk Johnson Jazz Band at its New Orleans-style gala last fall. Photo Courtesy: John Manes

When John Manes sees a need, he meets it.

Motivated by Matthew 25:31-46, which says that to serve the “least of these” is to serve Christ, Manes has volunteered with the Women’s Center of Lafayette in southern Louisiana for years. It was only a logical next step for him to launch a pregnancy center closer to his hometown of New Iberia, Louisiana.

The thought occurred to Manes in February 2017, when he was collecting bottles for the Women’s Center of Lafayette’s baby bottle fundraiser with his friend Lionel Schramm. Since delivering the bottles back to the center was Schramm’s first time visiting the center, he got a grand tour. After seeing the center and all of its services, he told Manes they needed a center more local to New Iberia.

“I chuckled and thought to myself, ‘Lionel, you have no idea how much work that’s going to be involved in this,’” Manes said. “I was thinking all this to myself. I didn’t respond to him then, but I said, ‘Okay Lord, if this is supposed to happen, you’re going to make it happen.’”

And He did. Now, almost a year and a half later, the Unexpected Pregnancy Center is about to open, with Manes serving as board president.

Feeling challenged by God to explore the possibility of opening a center last year, Manes and Schramm met with community leader, Regina Viator, founder of Bayou Right to Life. That meeting would bear great fruit. As it turned out, Viator’s family owned a vacant half of a building about half a block from the New Iberia courthouse—and they were willing to donate it.

Not only was the Unexpected Pregnancy Center able to use that property, but the adjoining office space was available for rent through a local businessman. In need of minor renovations, the board decided to lease the space.

Together with Viator, Manes and Schramm worked on recruiting board members, gathering a few more pro-life influencers in town, including Louis Broussard, a close friend of Manes’ and owner of a used car dealership, and Dr. Maurice Faugot, a pro-life pediatrician who delivered Manes’ daughter. Together, they formed a board of directors last October, with Manes serving as board president.

The night of the gala, over 400 supporters showed up.

“The kick-off event was more of a success than any of us could have imagined,” Manes said. “I think the guest speakers touched the hearts of many people who were there.”

The night of the gala, over 400 supporters showed up. | Photo Courtesy: John Manes

Speaking to the sizable crowd, one board member suggested that some of the attendees would eventually become the center’s leaders.

His prediction was spot-on.

One of those attendees was Brittany Thomson, a stay-at-home mother of three. Thomson had come to the gala with a friend whose mother was on the board of directors. Little did she know how God was going to use the gala to tug at her heart, calling her to serve at the center.

Whether it was the emotional presentation on abortion or her maternal instinct, once Thomson went home, prayed, and thought about the position, she decided to send her resume to the Unexpected Pregnancy Center.

She was hired to become the executive director in March.

Since then Thomson has been getting resources ready for the Unexpected Pregnancy Center, and has even had the opportunity to shadow the directors of nearby centers.

“I’ve been meeting a bunch of different people and come into work every day getting ready to save babies,” Thomson said. “I’m so blessed to have this job.”

Since the gala, the board has been able to renovate their building to create a welcoming space for women in need of their services.

When it opens this month, the Unexpected Pregnancy Center will offer pregnancy tests, ultrasounds, counseling, referral services and maternity-family education. In the future, the center hopes to offer maternity housing, as well as a support program for fathers.

Tweet This: Pregnancy tests, ultrasounds & counseling are just a few of the services women will find at Unexpected Pregnancy Center this summer. #prolife

“Abortion is the taking of innocent life,” Manes said. “It destroys not only the mother and the baby, but it also destroys the father many times.”

The Unexpected Pregnancy Center has already received calls from potential clients that they are referring to the Women’s Center of Lafayette until their building opens.

“We’re just going to take it day-by-day and with God’s grace and lots of prayers we’re going to get these doors opened and start saving these unborn babies,” Thomson said.