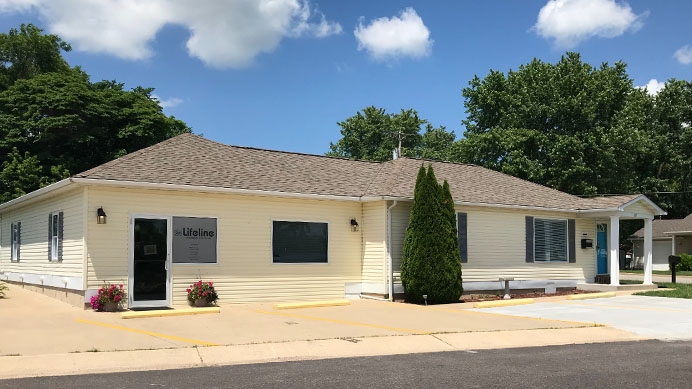 “It's always been our goal to own our own building,” says Lori Amato, Lifeline Pregnancy Care Center Executive Director. She just never expected a flood to sweep them toward that goal. Photo Courtesy: Lori Amato

Almost two years after a freak flood swept its building off its foundation, Lifeline Pregnancy Care Center welcomed the public to an open house in its new Cuba, Missouri location on June 2.

Guests were asked to bring housewarming gifts of diapers, wipes, and other items when they came to tour the remodeled house that has already been serving clients for eight months. At 2:30 p.m., several local pastors led a prayer, blessing the ministry and its new building.

“God has taken very good care of us,” executive director Lori Amato said, choking up as she described all the center had been through.

After losing everything but its ultrasound machine in the August 2016 flood, Lifeline Pregnancy Care Center operated out of Amato’s home for a couple of months before finding a small space to rent. But such cramped quarters could not provide a permanent home.

“It's always been our goal to own our own building,” Amato said. She just never expected a flood to sweep them toward that goal.

Hope dawned for that goal when an article reporting on the center’s loss in Pregnancy Help News sparked an initial outpouring of $30,000 from all over the country. Next, local donors at Lifeline’s annual October banquet gave $57,000 to fund operational expenses. Then, an unexpected insurance payout for sewer water damage financed replacement of many key items lost to the flood.

All that funding enabled Amato to make a $22,000 down payment last May on a commercially-zoned two-bedroom house with a two-car garage located right behind what is now a Taco Bell.

“It’s just perfect,” she said. “And our mortgage payments are much cheaper than our rent was.”

Transforming the property into a handicapped-accessible pregnancy center, complete with reception area, nurse’s station, a client restroom with specimen pass-through, and rooms for classes and meetings became the job of local contractor Rusty Ellis, who generously reduced his price. Others in the community donated flooring, toilets, and sinks. 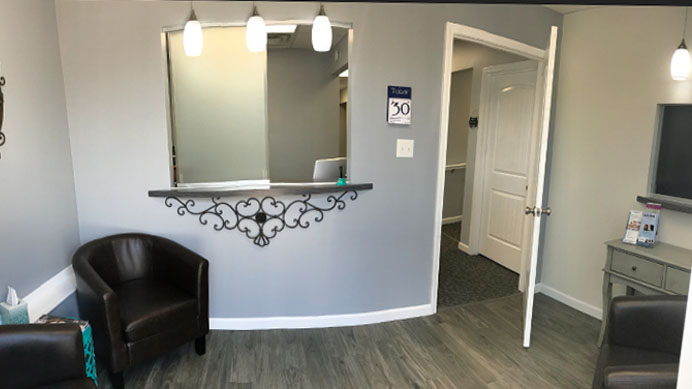 Future projects include putting up a sign and adding more parking, which will cost a combined $4,000.

As the center’s fresh new look shaped up, incorporating aqua and navy with rustic wood finishes, the board felt inspired to re-brand the ministry with an updated new logo and color scheme.

The new facility also gave Lifeline room to gear up toward offering STI testing in the near future. In addition, the center now has office space for a third staff member, client services director Margaret Disbrow, who came onboard in January, easing the load for Amato and executive assistant Sherry King who, like Amato, is a pastor’s wife. 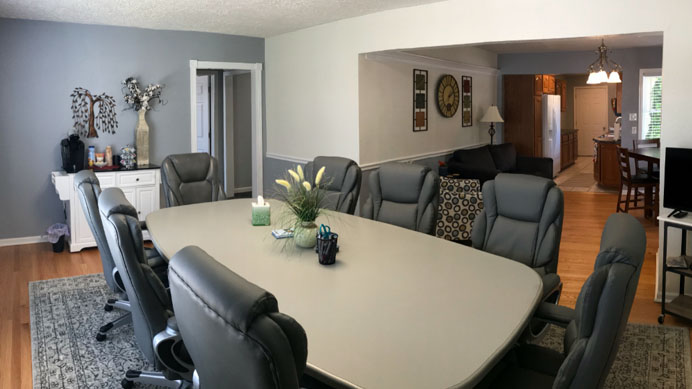 Above is the room where the center hosts classes and board meetings. The sitting area behind the table is where they do client intake. "No one else is in that area when we meet with clients," says Amato. | Photo Courtesy: Lori Amato

Little Rural Churches: It All Adds Up

Other pastors and their wives were the first people Amato had started talking to back in 2003 when her son’s classmate’s unexpected pregnancy revealed that her new home of Cuba, Missouri had no pregnancy help closer than an hour away.

Having previously served at Randolph County Pregnancy Resource Center in Asheboro, North Carolina, Amato set out to engage churches in bringing pregnancy help to her new community in rural Crawford County, one of Missouri’s poorest areas. Over an hour away from Saint Louis, Cuba is one of several towns of a few thousand people dotting the border of Highway 44 on the way to Springfield.

“Being a pastor's wife, I didn't know where else to start,” Amato said. “I started going to churches and presenting what God had laid on my heart. When I did that the Lord just opened doors. One little church in Leasburg that gave us our first check now supports us every month from their mission fund. It may be $25 to $50 a month, but God knows, and that adds up.”

Since that time, women like Sara, whose daughter Kayti turned five this month, have come through those doors and found new hope. Sara left a life of addiction to become a hairstylist who now gives back to the center that helped her by gifting current clients with a free shampoo and haircut.

Sara’s story of rebirth—coupled with all the signs of God’s provision in Lifeline’s flood recovery—reminds Amato to let God be responsible for the ministry’s size.

“I am not about the quantity,” she said. “I am about the quality of life we are giving to these girls. We want to reach them with the Gospel, even if it's only one or two a week, and let them know we care about them and their precious babies.

“I think sometimes we at pregnancy resource centers can get so wrapped up in the numbers we become complacent about sharing Christ with them and changing their hearts first and foremost. When we change their hearts we can work on saving their babies’ lives. The two go hand in hand.”