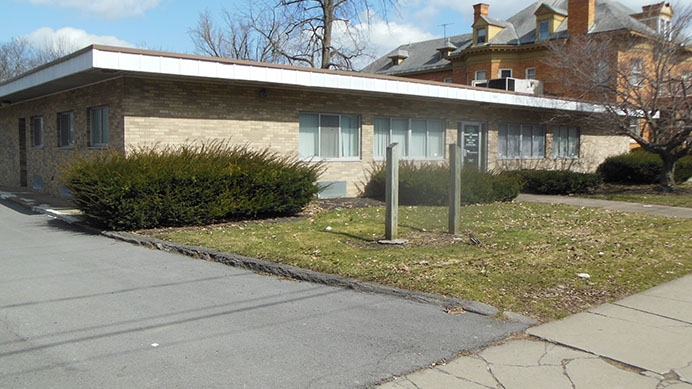 It only took twelve minutes. Twelve minutes for Paul Marshall, executive director of Care Net Pregnancy Center of Central New York, to lay down his donors’ cash, sign papers, and accept the keys for the first permanent home of his network’s pregnancy center in Utica, New York.

“The Utica center has been open 24 years, and we’ve moved six times,” Marshall said. “Every time we move, we lose clients.

“I'm the product of an unplanned pregnancy that wasn't aborted, so when we lose clients, I take that very seriously. I wanted to make sure that from now on, wherever we were, people would know they would find us.”

That’s why, when the center’s rented office on Genesee Street was put on the market about two months before the fall fundraising banquet last year, Marshall decided it was time for the center to have a place to call home.

“About that time, I started reading Kirk Walden's The Wow Banquet,” Marshall said. “I took his advice and started even before the banquet casting vision to our table hosts and banquet sponsors for raising enough money to purchase this building.”

His board had decided the upcoming October banquet would serve as a litmus test for their vision: “If we raised a lot more than our average $100,000, it was a sign God was leading us in this direction,” he said. “If our donors didn't buy in, we would rethink our strategy.”

So they brought in Kirk Walden as their banquet speaker and awaited the outcome.

Finding the right building didn’t take long, however. In November 2017, a realtor led Marshall, along with board members, Utica center director Norma Nashold, and development director Sara Kardas on a walk-through of a 4300-square-foot former doctor’s office.

“This is it!” Marshall said at the time. “This place is tailor-made for a pregnancy center.”

His group could see how four of the rooms could immediately be used for pregnancy test counseling, a separate room was ideal for ultrasound and another for STI testing. Conference rooms could hold parenting classes, and a much larger room could house the boutique and still have room to store donations.

With two waiting rooms, clients just considering the results of their pregnancy tests and ultrasounds could find a quieter space to collect their thoughts, separate from parenting clients. The building also included several bathrooms, administrative offices, a staff break room and even spaces where staff could finish charting.

With that building in view, Marshall and his team kept praying. Then came more miracles.

After Marshall talked to a group with whom he prays twice a year, a woman from the group called him to say that she and her husband wanted to help the center purchase the building—for cash—by offering a matching grant.

“The lady wanted to offer us $60,000,” Marshall said. “I just about fell out of my chair. Immediately I could just see God all over this. Unknown to them, I already had appointments with three of our major donors lined up for the following week.

“By the end of that week, I had $48,000 of the $60,000 committed. It was just amazing. All I had was $12,000 to go and I picked that up within the next week or two. So from start to finish—from the time we had the banquet and cast the vision that night, until we actually had the money in hand—it was about five months total.”

After a short negotiation period, the seller accepted Marshall’s offer and Care Net CNY in Utica had its home.

By purchasing a building, the center will save an estimated $20,000 per year in lease expenses. This means up to two desperately needed part-time staff can be brought on board. And with the monies donated beyond the purchase price, the center will be able to put on a new roof and replace all four of the building’s HVAC units, as well as update the interior wall coverings and flooring.

On top of the monetary donations, over 50 people have offered their time and skills to help with redecorating and moving. “That's part of the benefit of having been here so long,” Marshall said. “Care Net CNY is in our 29th year of operation. It seems like people in this community really value what we do.”

Serving All Clients under One Roof

Moving into the new building will reunite all the center’s services under one roof for the first time since 2014.

That year, a previous lease ended and the center’s services splintered into three separate rented buildings: one property on Genesee Street hosted pregnancy tests, ultrasounds, and STI testing and treatment; clients traveled two miles away on Plant Street to parenting classes, Earn While You Learn, and material aid. Administration and development offices moved out of town to New Hartford.

Staff was spread too thin, office hours diminished, and clients lost out.

“The travel distance made it very difficult for our clients, many of whom walk or take the bus,” Marshall said.

Not only is the new location convenient to the bus routes, it also stands only a city park away from Planned Parenthood.

“Our philosophy from day one is that we want to be the compassionate roadblock before someone ends up scheduling an abortion,” Marshall said.

For that reason, Care Net CNY has placed centers across the rural landscape of central New York, from larger towns like Utica and Rome to small communities like Morrisville and Camden with populations under 5,000.

“The only way to be that roadblock is to pay the price of being in smaller communities and being like the first responders,” Marshall said. “We want to be there out in the communities. When you analyze cost/client visit, in Utica, Rome, Herkimer—those are easier to justify.

“But in those smaller communities, we might save 20 human beings from being aborted every year. And bottom line: We just think that's worth the price.”

Tweet This: "We might save 20 human beings from being aborted every year. And bottom line: We just think that's worth the price." #prolife @kinglewrites