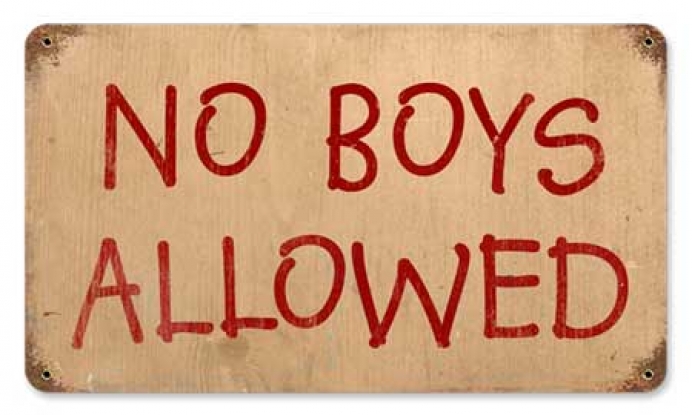 Two Simple Reasons to Dismiss Gender Bias Out of Hand

I remember the moment vividly. I was 9-years-old, at my grandparents’ house for Christmas, when my uncle Mike broke the news to me:

The San Francisco Giants had hired a new public address announcer, and she was a girl.

Naturally, I was mystified and confused. Could this really be? Could the voice of a lady—a mom for all I knew—really be the one to boom through Candlestick Park announcing the forthcoming presence of Matt Williams, Will Clark and Robby Thompson?

“Noooow batting… hold on, let me put down my knitting… Barrrrryy Boooonds!” That was uncle Mike’s joke, but it sounded ominous to a boy whose childish line between jest and reality was often misplaced or nonexistent altogether.

A League of their Own notwithstanding, the bottom line was, “How can a lady have the credibility to speak in this man’s realm?”

Surely it was childish for me to automatically assume a lack of credibility, simply based on gender. When I was a child, the Apostle’s saying goes, I thought like a child, I reasoned like a child. But when I became a man, I put childish ways behind me.

Tweet This: "Abortion is not a matter of preference, but morality. It's either right or wrong." @Hobbnobbin

But now that I’ve grown up, I’m noticing that same childish thinking is alive and well today.

The argument goes like this, “Abortion is a woman’s rights issue, so unless you are a woman, pipe down and stay out of it.”

There’s no shortage of examples, but the two that most readily come to mind from this week’s news have been Idaho state Rep Vito Barbieri’s unfortunate question—which seems to have been taken at least somewhat out of context—and the death of pro-life pioneer Dr. John C. Willke.

While Rep. Barbieri’s ill-worded question has placed him on the pro-abort’s merciless link-o-rama, the death of Dr. Willke—an ob-gyn who spent his 89 years on earth serving women and delivering babies—has been noted with a mixture of a typically opportunistic statement from NARAL representatives to the unconscionably vulgar celebration in the New York Observer.

You can count one more if you include Big Abortion’s ludicrous reaction to Heroic Media’s “The Apology,” which features men doing what they must, apparently, never do: being honest.

Perhaps I’ve already made this point, so I’ll be brief. Attempts to cut men off from the abortion conversation are based on the childish assumption that you must be a woman to understand or appreciate the issue.

This reasoning is similar to the childish thought-process I brought to the table when I automatically discounted a woman as the PA announcer for my beloved baseball team (and, incidentally, World Series champions in three of the last five years).

That indiscretion can be forgiven, I think, since I was a child when I thought that way.

But there’s a deeper problem with this sort of immature thinking: It fails to take either ethics or morality into account. Abortion is not about preference or experience. Fundamentally, it’s about the “right” of one group of people to do away with another group of people. This “right” is either a right “right” or a wrong “right.”

Imagine we were to start a civilization from scratch on a remote desert island. A group of us propose a law: No stealing.

“Objection!” one stately representative says. “Unless you’ve stolen or been stolen from, you have no place in this discussion.” The foolishness of such an objection would be self-evident. Either stealing is right, or stealing is wrong. Experience has no bearing in the conversation.

Back to abortion. When men or women claim that this “right” is wrong, we’re making a statement about morality, not experience. Because of that, the “experience” of gender doesn’t factor into the equation any more than the “experience” of theft factors into the debate about theft on our desert island.

Our task is to learn to differentiate between the moral and experiential.

The clarion call for men to exit stage left from the abortion conversation fails decisively on another plane: History.

Five of the 12 members of the Planning Committee for NARAL (which originally stood for National Association to Repeal Abortion Laws) were men. The chairman of this committee was a man named Lawrence Lader, and by all accounts, he was never pregnant.

The second president of Planned Parenthood, who served in that capacity from 1962 to 1974—seeing both the approval of the birth control pill by the FDA and Roe v. Wade—was a man named Alan Frank Guttmacher.

Mr. Guttmacher, a man, also founded The Center for Family Planning Program Development, which later was renamed in his honor as the Alan Guttmacher Institute. The “Alan” was removed from this title in 2005, and I’ll let you use your imagination as to why.

In the present day, we have an American president, Barack Obama, who is universally heralded as a champion for women’s reproductive rights. For all his fine qualities, Mr. Obama will never become pregnant.

In short, abortion advocates’ demand that men stay out of the conversation is entirely arbitrary on its face. What they mean is that all men who disagree with them must be denounced and decried as irrelevant club-wielders.

Tweet This: Pro-aborts don't want men to shut up. Just those who disagree with them.

As in all times, the value and dignity of human life is the key question of our day. How we care for one another—especially the most vulnerable among us, to paraphrase Mr. Obama—is how we will be judged by the generations that follow us.

When we grow up, we might just understand that.