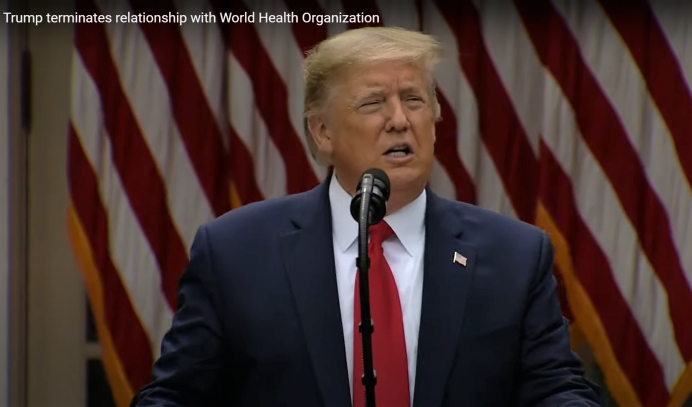 Donald Trump announces May 29, 2020, that the U.S. is terminating it relationship with the World Health Organization Screen capture/Fox News YouTube

President Donald Trump has announced that the United States is ending its relationship with the World Health Organization (WHO) due to the WHO’s failure to enact reforms amid concerns over its handling of the coronavirus pandemic and China’s influence over the organization.

Speaking at a press briefing Friday afternoon, Trump said that China had “total control’ of the WHO and faulted China’s leaders for their handling of the virus once it was discovered in the Wuhan province, leading to countless deaths and profound economic damage globally.

The U.S. would be channel funds previously given to the WHO to other “deserving” public health organizations, the president said.

“We have detailed the reforms that it must make and engaged with them directly, but they have refused to act,” Trump said. “Because they have failed to act and make the requested and greatly-needed reforms, we will be today terminating our relationship with the World Health Organization and redirecting those funds to other worldwide and deserving, urgent, global, public health needs.”

Pro-life advocates have criticized the WHO for its support for abortion worldwide, including in countries where the procedure is illegal.

Similar to many other abortion-friendly organizations, the WHO has used the pandemic to step up its abortion advocacy, promoting abortion as “essential” in its COVID-19 health policies.

“Services related to reproductive health are considered to be part of essential services during the COVID-19 outbreak,” the WHO stated in April, continuing that, “women’s choices and rights to sexual and reproductive health care should be respected, irrespective of whether or not she has a suspected or confirmed COVID-19 infection.”

Tweet This: "Services related to reproductive health are considered to be part of essential services during the COVID-19 outbreak” - World Health Org.

The WHO stated further that “sexual and reproductive health care is integral to universal health coverage and achieving the right to health.”

“This includes contraception, quality health care during and after pregnancy and childbirth, and safe abortion to the full extent of the law,” the organization said.

The WHO had also actively instructed humanitarian workers in performing abortions through issuance of training books and guidelines, encouraged self-managed abortions with chemical abortion guidelines and included dangerous abortion drugs in its essential medicines list.

Trump had announced last month month he would be directing his administration to suspend U.S. funding from the WHO while the White House investigated the WHO's part in its response to the spread of the Wuhan coronavirus.

The U.S. is the largest funding source for the WHO, according to the Tampa Bay Times, and its departure is expected to weaken the organization significantly.

China has “total control over the World Health Organization,” Trump said Friday, despite its only paying $40 million per year to the WHO, where the U.S. has been paying approximately $450 million a year.

China, however, had recently announced a $2 billion injection of funds to the WHO, Fox News reports.

Controversy over the virus' origin and handling of the outbreak by many leaders at numerous levels has pervaded the pandemic in the U.S. and overseas, and political blocs have used the crisis to criticize their opposition.

Beyond the loss of life, with widespread lock-downs and government overreach in some areas, extensive financial devastation through businesses and livelihoods lost, disruption and impairment of the academic school year, and large-scale damaging implications for mental health and domestic abuse, the full human toll of the pandemic is rampant and potentially incalculable. China has been criticized for not being forthcoming about the coronavirus since its discovery there, for suppression of speech about the virus, and also for undue influence over the WHO, which has also been criticized for misinformation regarding the pandemic.

The president went on to say that the world needs answers and transparency from China on the virus.

He questioned why China had blocked its infected residents from Wuhan from all other parts of China, but allowed them to freely travel throughout the world, including Europe and the United States.

“The death and destruction caused by this incalculable,” Trump said. “We must have answers, not only for us but for the rest of the world.”

During the briefing Trump also announced proclamations and other actions resulting from the pandemic designed to build the U.S.’s economic security and protect the nation’s supply chain, scientific and technological advances and university research.

Editor's note: This article has been updated with pandemic statistics/additional reporting on the crisis.