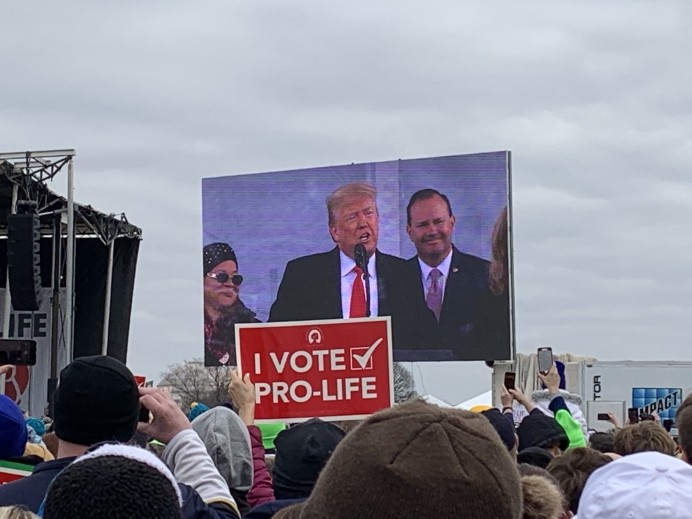 Trump’s historic speech at the March for Life

“The Most Pro-Life President in History?”

When Donald Trump first announced his candidacy for the Republican presidential nomination in 2015, there were few pro-life leaders who were excited about the thought of a President Donald Trump. Most knew Trump as a life-long “pro-choice” New York liberal, a flamboyant and sometimes-cutthroat businessman, a brash (and occasionally downright crude) reality TV star, and a thrice-married playboy.

When Trump started trumpeting a supposed pro-life conversion, most reacted with well-justified skepticism. With no track record of substantive pro-life statements or concrete actions, it was almost impossible to grant credence to the somewhat fantastical story he told about questioning his prior pro-choice convictions after meeting the son of some unnamed “friends” who had nearly been aborted. It all sounded too contrived, and fairly reeked of political expediency.

Even when Trump won the nomination, many pro-life leaders assumed an attitude of careful and guarded pragmatism: in light of the alternative (Hillary Clinton, one of the most rabidly pro-abortion politicians in U.S. history) the pro-life movement rallied to elect Trump, hoping that by carefully working with Trump administration officials who personally cared about the pro-life issue, we might be able to protect pro-life gains made in previous years, and possibly even push the ball forward.

While some pro-life leaders were more convinced than others about the authenticity of Trump’s pro-life convictions, nobody that I can think of thought that at any point anyone might seriously suggest calling President Trump the “most pro-life president in history.” And yet, one need not look very far these days to find well-informed pro-life leaders and commentators suggesting just that.

True, the moniker might not be entirely defensible in the grand sweep of history, since there were unquestionably many presidents prior to Roe v. Wade who would have regarded the mere idea of abortion with unspeakable horror. But I think it’s fair to say that, speaking of presidents since Roe v. Wade, President Trump is certainly in the running for the distinction of having done the most to actually pursue a substantive pro-life agenda, and to take political risks to do so.

I was thinking about all of this as I watched President Trump take the podium at the National March for Life last Friday.

I never really thought that I would see the day when a sitting president would personally make an appearance at the March. Certainly, previous presidents have enthusiastically supported the event. Both Presidents Bush and President Reagan were satisfied to phone in to the march. Hearing their voices live over the PA system on the Mall was always extremely exciting, and the pro-life movement was always deeply grateful for their support. However, it always seemed somewhat odd that they weren’t willing to drive the short distance from the White House to the Mall, so as to be physically present.

Many of us rationalized that decision, noting that the security problems posed by the presence of a U.S. president were considerable. Perhaps the presidents just didn’t want to cause their security teams undue anxiety. However, as Washington Post columnist and former George W. Bush speechwriter Marc Thiessen wrote a few days ago, the unwillingness to go the extra mile tended to telegraph a demotivating message to pro-lifers: “They were the black sheep of the Republican coalition. Their presence was tolerated because their votes were needed.”

The thing is symbols matter. They matter a very great deal. No, speaking at the March for Life isn’t the most important pro-life action a president can take. But, when that decision is backed up by a meaty and consistent pro-life record, then it’s a game changer. That’s why I fully agree with Thiessen that President Trump’s decision to personally attend the March for Life last week was a truly historic event. “It’s hard to overstate how important this development is,” wrote Thiessen. “Given their lack of other options, pro-lifers accepted their second-class-citizen status in the GOP. Then along came Trump, a man who doesn’t care what the Republican establishment thinks. He has embraced the pro-life movement in a way no other president has.”

One can choose to put a pragmatic political spin on Trump’s decision. After all, it is an election year, and Trump desperately needs the full-throated support of his conservative base. And yet, here’s the thing: even if it’s true that Trump’s decision to speak at the March was in part politically motivated, it was also profoundly politically risky. While the U.S. electorate is trending pro-life, the abortion issue is still deeply contentious. Previous Republican presidents chose not to take the risk of appearing to be too cozy with the pro-life movement. By attending the March for Life, President Trump made it clear that he’s not just willing to push pro-life policies, but he also considers himself one of us.

Tweet This: Even if it’s true that Trump’s decision to speak at the March was in part politically motivated, it was also profoundly politically risky

It would be difficult to overstate the power of Trump’s symbolic gesture. No longer is the president over there, in the White House; he’s here, standing with us, unembarrassed by our conviction and enthusiasm.

What’s more, President Trump’s speech last Friday was quite simply a fantastic speech. Like most presidential speeches, it was almost certainly written by one of his aides. But Trump delivered it with heartfelt passion and a real sense of conviction. And the words themselves were deeply inspiring. Instead of casting the fight against abortion in contentious political terms, President Trump rightly chose to emphasize the positive, forward-thinking, human-rights based, and compassionate side of the pro-life cause – that is, to emphasize the true nature of this movement. There were many passages that waxed poetic in ways that captured the real heart of the pro-life movement. Passages like this:

When we see the image of a baby in the womb, we glimpse the majesty of God’s creation. When we hold a newborn in our arms, we know the endless love that each child brings to a family. When we watch a child grow, we see the splendor that radiates from each human soul. One life changes the world …

You stand for life each and every day. You provide housing, education, jobs, and medical care to the women that you serve. You find loving families for children in need of a forever home. You host baby showers for expecting moms. You make – you just make it your life’s mission to help spread God’s grace.

And to all the moms here today, we celebrate you and we declare that mothers are heroes. Your strength, devotion, and drive is what powers our nation. Because of you, our country has been blessed with amazing souls who have changed the course of human history.

We cannot know what our citizens yet unborn will achieve. The dreams they will imagine. The masterpieces they will create. The discoveries they will make. But we know this: every life brings love into this world. Every child brings joy to a family. Every person is worth protecting.

And above all, we know that every human soul is divine and every human life, born and unborn, is made in the holy image of Almighty God.

Naturally, the president also took the opportunity to speak about his administration’s record on the pro-life issues. But listening to the list of accomplishments, one has to admit that these are not run-of-the-mill, recycled Republican talking points. In many ways the Trump administration has charted new paths and taken new risks. Of course, there are the old, well-trodden (and extremely important) GOP policies such as reinstating the Mexico City Policy, which blocks U.S. federal funding for NGOs that support abortion.

But there are also the efforts that Trump has taken that go above and beyond, including his administration’s many efforts to defend religious liberty and conscience rights. Trump specifically mentioned efforts to defend the Little Sisters of the Poor, a group of nuns that has refused to bow to the Obama administration’s requirement that they pay for health insurance that includes coverage for contraception. Though not directly related to the abortion issue, Trump also mentioned his administration’s efforts to protect faith-based adoption agencies, many of which were forced to shut down because of government requirements that they adopt children out to homosexual couples. Though this move has not gotten the press it deserves, this is one of the more significant (and politically risky) moves the Trump administration has made.

Trump also, quite rightly, and without pulling any punches, called attention to the insane extremism of the Democratic party on abortion. “Democrats have embraced the most radical and extreme positions taken and seen in this country for years and decades, and you can even say, for centuries,” he said. “Nearly every top Democrat in Congress now supports taxpayer-funded abortion all the way up until the moment of birth.” Trump specifically called out Democratic politicians in New York, who cheered when that state passed a law that would allow abortion up until birth.

Liberals who profess to be scandalized that conservative American Christians have thrown their support behind a man who has spent much of his life living in ways opposed to everything they stand for, and who in many respects remains a far from perfect representative of their worldview, should pay very, very close attention to Trump’s speech on Friday. The enthusiastic cheers of hundreds of thousands of pro-life Americans doesn’t mean that they support every single thing the president does or says. However, with his appearance at the March, he showed that he is willing to take significant risks to support a cause that we view as more important than any other issue facing our country.

As one Trump-skeptic wrote a few days ago:

His promises to the movement have not been empty promises, regardless of what you think of his pro-life conversion story or his character. His speech to the roaring crowd of pro-lifers was magnificent, and one of the reasons their enthusiasm was so palpable is that their president was speaking their language and supporting their life-saving work. That’s not nothing. That’s something.

Tweet This: "His promises to the movement have not been empty promises, regardless of what you think of his pro-life conversion story or his character"

Few expected a Trump presidency to be so unabashedly and pro-actively pro-life. We have every reason to be grateful. However, we should not grow comfortable, even for a moment. I hope you will join me in praying for our President and his administration, that they will be given the courage and wisdom to create a true Culture of Life in our country.

Editor's note: Fr. Shenan J. Boquet serves as president of Human Life International. Ordained in 1993, he is a priest of the Houma-Thibodaux Roman Catholic Diocese in Louisiana, his home state, where he served before joining HLI in August, 2011. Raised in a devout family, which provided his initial formation, today he works with officials from the Vatican on down to villages in Africa. He is available for interviews and bookings on behalf of HLI and has traveled over a million miles to 80 countries and counting, all to aid in building a Culture of Life.  This article is reprinted with permission of Human Life International at HLI.org.