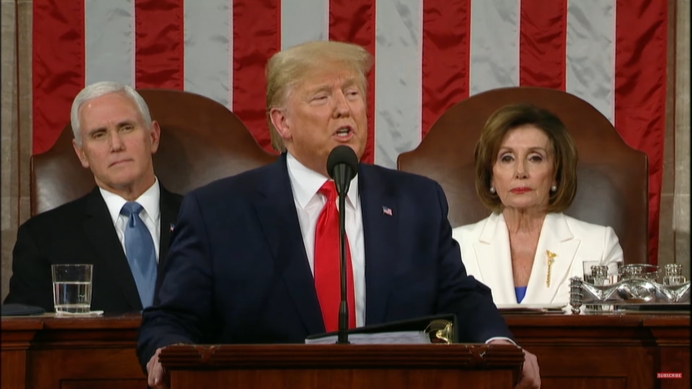 Trump at State of the Union: ‘Every human life is a sacred gift from God’

(Live Action) Tuesday night, President Donald Trump gave his annual State of the Union address, discussing a variety of different topics — and one of those was the sanctity of human life. Among several emotional moments was one involving a special little fighter and her mother: Ellie and Robin Schneider, who both attended the State of the Union as Trump’s special guests.

“In 2017, doctors at St. Luke’s Hospital in Kansas City delivered one of the earliest premature babies to ever survive,” Trump began. “Born at 21 weeks and six days and weighing less than a pound, Ellie Schneider was a born fighter. Little Ellie kept on winning the battle of life. Today, Ellie is a strong and healthy two-year-old girl sitting with her amazing mother, Robin, in the gallery. We are glad to have you with us tonight.”

President Trump spoke about the hope that people like Ellie give the country, as well as the work that still needs to be done. “Ellie reminds us every child is a miracle of life. Thanks to modern medical wonders, 50% of premature babies delivered at the hospital where Ellie was born now survive,” he said, adding, “Our goal should be to ensure that every baby has the best chance to thrive and grow, just like Ellie. That is why I am asking Congress to provide an additional $50 billion to fund neonatal research for America’s youngest patients.”

Tweet This: “Ellie reminds us every child is a miracle of life...50% of premature babies delivered at the hospital where Ellie was born now survive”

Yet as Live Action president Lila Rose pointed out on Twitter, countless babies born at the same gestational age as Ellie are still legally killed through abortion every day in this country.

President Trump used Ellie’s story to announce his goal of banning late-term abortions, as Ellie’s mother Robin Schneider cried and cheered. “That is why I am also calling upon numbers of Congress tonight to pass legislation finally banning the late-term abortion of babies,” he said. “Whether we are Republican, Democrat, or Independent, surely we must all agree that every human life is a sacred gift from God as we support America’s moms and dads.”

But Trump didn’t just call for preborn lives to be protected; he also argued that families need more and better support, calling for things like increased paid family leave and more accessible child care options. “I was proud to sign the new law offering parents in the workforce paid family leave, serving as a model for the rest of the country,” Trump said. “Now I call on Congress to pass the bipartisan Advancing Support for Working Families Act, extended family leave to mothers and fathers all across our nation.”

As Lila Rose again explained in response on Twitter, these policies are part of what it means to be pro-life. “Paid family leave is pro-life policy in action,” she wrote. “No mama should have to leave her newborn to go back to work just to make ends meet.”

Banning late-term abortions and providing paid family leave and child care are laudable pro-life goals. The Trump administration should be commended for the action they have taken thus far to protect life. But it is not enough; until Planned Parenthood is defunded and abortion is not only made illegal, but unthinkable, there is work that will still need to be done.

Editor's note: This article was published at Live Action News and is reprinted here with permission.