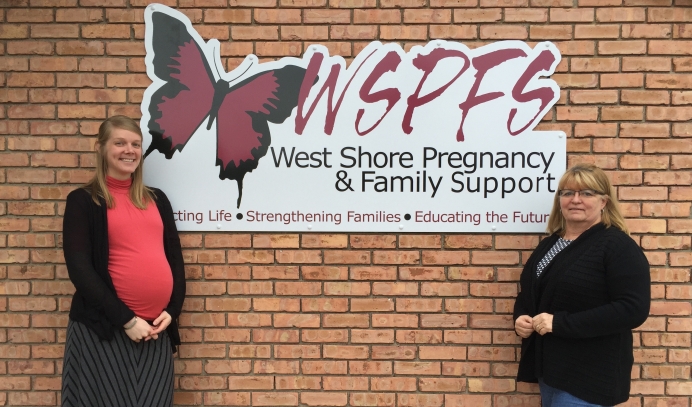 Within months of receiving surprising feedback from their clients and community, the former West Shore Pregnancy Care Center in Ludington, Mich., enacted two changes. First, they launched a satellite office in nearby Hart in June 2016, then, they changed their name to West Shore Pregnancy and Family Support in Jan. 2017.

“We were looking at the idea of becoming a medical center, and specifically offering STI testing,” executive director Heather Bush said, citing an uptick in STIs and a high cost of testing through the local health department. “We were curious how many of our clients would actually use this service, and would it help us in our goals.”

So her team asked their clients for opinions. What they learned surprised them.

STIs did not top the list of clients’ perceived needs.

Barb Hernandez, the organization’s director of client services, had noted that 12 percent of their clients were Hispanic—80 percent of whom lived in Mason County, where Ludington is located. While the center was serving the Latino population in and around Ludington, they were failing to reach potential clients in Oceana and Lake Counties, which also had significant Hispanic populations.

“We talked to [the Mason County] clients and they told us that if they were living in Oceana County, it was too difficult to find transportation to Ludington most of the time,” Hernandez said. “Their other deterrent was the language barrier.”

Hernandez knew of potential translators in Oceana County: Pastor Bob Gray of Hart Wesleyan Church and his wife Susie, former missionaries to Mexico and Colombia. Together Hernandez and Gray came up with the solution to open a satellite office in the church.

“Barb told us their goal was to reach out to the Hispanic community, and that was one of our goals, too,” Bob Gray said. The church provided its nursery as a counseling room, the fellowship hall for a reception area, and some storage space for material assistance items.

That satellite office opened June 1, 2016, staffed by Hernandez and at least one volunteer, operating Wednesday mornings.

“It is a very good relationship,” Hernandez said. “Bob's wife is our translator two Wednesdays per month, and Bob fills is when he is in his office. Susie has also taught parenting classes in Spanish for us.

Partnering with the Gray’s church has helped Hernandez and the center make the most of the church’s reputation for serving in the community, while giving the center a well-prepared ministry to send women for material assistance and follow-up help.

“The other great thing that has happened is the Wesleyan church runs a community supper on Wednesdays and a clothing closet. We are able to refer our clients to the church’s outreach. Just another touch point in the community for these families to see the hands and feet of Jesus.”

Those touch points are making a difference.

“Since June, we have reached 17 new families.” Hernandez said. “We have attended two migrant parent meetings at True North sites [in] Oceana County, and we have 6 families that have re-engaged in our services.”

With one set of needs addressed, the center turned to its next question. If they were doing only two or three pregnancy tests a month, while 40 abortions a year were performed in their three-county area, what else was keeping women from coming through their doors?

When the board initiated a community-wide Facebook survey in the early summer of 2016, a broad sampling of people in demographics similar to both supporters and clients indicated two widespread misunderstandings.

“One thing was the ‘pregnancy care’ part scared people away,” Bush, who has led the organization since July of 2014, said. “We found out they thought we only served women in pregnancy.”

The survey also revealed that, following the Center for Medical Progress’ investigation, released in 2015, that uncovered Planned Parenthood’s complicity in the illegal trafficking body parts it harvests from aborted babies, “people can get a weird connotation, without understanding what [an] organization does,” Bush said.

In response to this feedback, the board changed the center’s name, hoping to make their mission clear.

“The new name more accurately reflects what we've been doing,” board chair Emily Ridley said. “We want to be clear that we serve families with young children and babies. We want to enhance their parenting skills, supporting them as listening ears and pointing them to community resources. The change to ‘Family Support’ lets people know we provide those services.”

One recent couple who demonstrate the good work of the center were both seniors in high school when a positive pregnancy test rocked their world. Without the support of their own parents, the couple still rejected abortion, embraced parenthood and took advantage of the center’s training to become the parents they are today.

“They ended up getting married.” Bush said. “He found a job, and they had this baby boy that's beautiful. It's really cool to see them—these 17-year-olds who get a curve ball thrown at them—choose life and choose to make the most out of it.”

Under their new name, West Shore Pregnancy and Family Support has already moved forward toward increasing community awareness of their work.

Christian radio station PromiseFM chose West Shore Pregnancy and Family Support as one of nine pregnancy centers to benefit from their pro-life fundraising effort known as Michigan’s Biggest Baby Shower. During a January open house at the Ludington office, the station’s program director broadcast live from the center, interviewing staff and urging people to come visit and donate.

“It was a 2-hour event, and we saw well over 50 people,” Bush said. “Seventy-five percent of them were otherwise unconnected with our center before. They had just heard it on the radio and were curious, so they stopped by. We ended up raising just over $1,000 in monetary donations and about $1,500 in material donations.”

On February 10, the center held a father-daughter ball. During the ball, Bush told the capacity crowd of 160 dads and girls, “You have this awesome opportunity to love on your daughter . . . and make her feel like a princess. There are so many little girls in our community who don't have this opportunity. Through this ministry, we're trying to get more dads involved."

One dad who has benefited from the center’s fatherhood initiative was in jail when he heard his 10-month-old son had been placed in foster care. While he was still incarcerated, he started meeting regularly with two volunteers with the center, and he’s been taking parenting classes and holding his supervised visits at the center since his release.

A group of people in Lake County, the third area West Shore Pregnancy and Family Support serves, has reached out for more services, too.

“There's a really big lack of resources in Lake County,” Bush said. “Right now how we minister to a lot of Lake County women is through other agencies. We have Catholic Charities who go to their clients' homes once a month; we provide them with materials at this time.”

Teen moms from Lake County also receive assistance when the center’s WORTH program coordinators take their healthy relationship program into the schools.

“There's a need out there, but we have very little way to interact with them,” Bush said.

Recently, two ladies from a church from Baldwin, a town in Lake County, asked Bush about opening a satellite office. With multiple changes underway and her own baby due shortly—she’s since delivered her third child—Bush was hesitant to take on another project just yet.

“When they approached me, I said, ‘Yeah, that's great, but I don't have the time or ability to do it myself,’” Bush said. “They were like, ‘Oh, no. You help us set it up, you help us with the resource side of it and we'll take it on.’ They want to do it. They just need help to get it started.”

Bush plans to meet with group when she’s back from maternity leave.

With two offices open and a third, hopefully, on the way, West Shore Pregnancy and Family Support is now considering ways mobile ultrasound might fit in with their future plans.

“We haven't ruled out the idea of becoming a medical center,” Bush said. “It's still something that's very much on our radar.”

That radar of theirs, sensitive as it is, should allow them to make rapid—and caring—responses to the people they aim to serve.