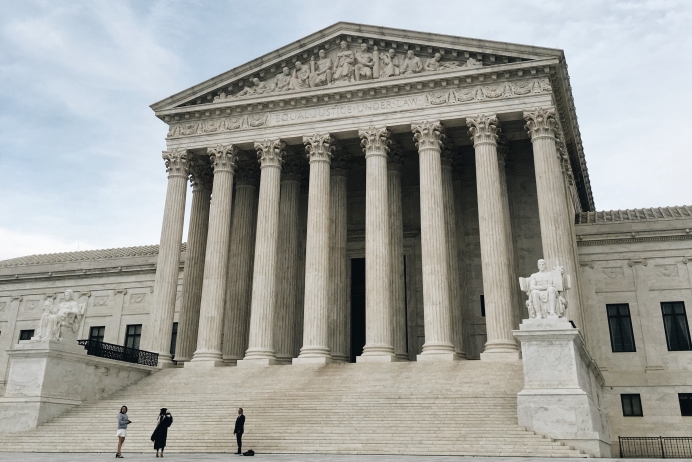 “CSS seeks only an accommodation that will allow it to continue serving the children of Philadelphia in a manner consistent with its religious beliefs; it does not seek to impose those beliefs on anyone else,” Chief Justice John Roberts wrote in the majority opinion.

(CNA) The Supreme Court on Thursday decided unanimously in favor of Catholic Social Services in its lawsuit against the city of Philadelphia, ruling that the city violated the group’s free exercise of religion.

The city in 2018 had stopped partnering with the agency in its foster-care program, since Catholic Social Services [CSS] would not certify same-sex couples as foster parents on religious grounds.

In the majority ruling, the high court found that “The refusal of Philadelphia to contract with CSS for the provision of foster care services unless CSS agrees to certify same-sex couples as foster parents violates the Free Exercise Clause of the First Amendment.”

“CSS seeks only an accommodation that will allow it to continue serving the children of Philadelphia in a manner consistent with its religious beliefs; it does not seek to impose those beliefs on anyone else,” Chief Justice John Roberts wrote in the majority opinion.

“The refusal of Philadelphia to contract with CSS for the provision of foster care services unless it agrees to certify same-sex couples as foster parents cannot survive strict scrutiny, and violates the First Amendment,” he added.

According to Becket, a religious liberty law firm representing the foster moms and Catholic Social Services in the case, 29 other foster care agencies in Philadelphia work with LGBTQ couples, and three of those agencies are certified by the Human Rights Campaign for their excellent service to LGBTQ families. The firm also said that Catholic Social Services had not turned away any same-sex couples before the city ended the contracts.

In a tweet, Becket stated on Thursday, “This is a huge victory for heroic foster moms and for #religiousfreedom. It ensures that religious groups like Catholic Social Services—who serve kids regardless of their race, religion, sex, or sexual orientation—can continue their great work.”

Tweet This: Fulton v. City of Philadelphia is a victory for foster moms & religious freedom-ensuring that religious groups can continue their great work

The case - Fulton v. City of Philadelphia - concerns the largest city in Pennsylvania ending its foster care contracts with Catholic Social Services because the faith-based agency said it would not certify same-sex couples to be foster parents; the agency’s policy was religious, due to the Church’s teachings on marriage and family. The agency also does not certify unmarried couples as foster parents, regardless of their sexual orientation.

The city argued that the policy constituted discrimination according to its nondiscrimination ordinance, and would no longer work with the group.

Two foster mothers who worked with the agency - Sharonell Fulton and Toni Simms-Busch - sued Philadelphia, arguing that in ending the contracts the city violated the agency’s First Amendment right to religious freedom.

A spokesperson for the city of Philadelphia did not immediately respond to a request for comment from CNA.

Catholics and religious freedom advocates praised the decision on Thursday.

“Today's decision prohibits government sanctioned discrimination against religious adoption and foster care agencies because of their beliefs about marriage,” stated Ashley McGuire, senior fellow with The Catholic Association. “Those efforts are rooted in an anti-Catholic bigotry that refuses to tolerate pluralistic views and beliefs.”

“For more than two centuries, Catholic agencies have successfully placed the most at-risk kids in loving, forever homes. Today, the Supreme Court rightly affirmed that the Constitution guarantees faith-based agencies freedom from government harassment and discrimination because of their religious beliefs about marriage,” stated Brian Burch, president of CatholicVote.

Other pro-LGBT activists criticized the ruling.

In a statement, Alphonso David, president of the Human Rights Campaign, an LGBTQ advocacy group, said the decision “does not negate the fact that every qualified family is valid and worthy—children deserve a loving, caring, committed home.”

One legal expert said the ruling was significant for religious freedom.

"It is striking, and telling, that the Court's more liberal justices joined the Court's decision," Garnett noted. "Today's ruling illustrates that respect for religious freedom should not be a partisan, or left-right issue. All nine justices agree that, when a rule targets religious practices for disapproval, or singles our religious exercise for burdens, it is highly suspect."