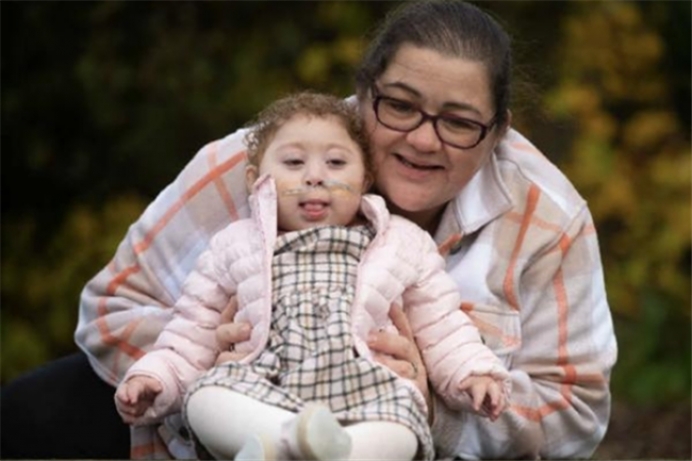 (NRLC) Doctors gave Cassy Gray, 36, an awful prognosis when she came in for her twelve week scan: her baby’s condition was “incompatible with life” and she was “strongly advised” to abort.

Megan White “has a rare condition called semilobar holoprosencephaly, which meant her brain stopped developing in her mother’s womb at five weeks gestation,” according to reporter Claire Elliot.

Cassy was not deterred, even when told there was a 97 per cent chance her baby would be stillborn. “We decided right away that termination was not an option”, said Cassy. “I’m not religious but I thought if God wants Megan, he’ll take Megan; if she was going to die, she’d die in her own time – I wasn’t going to take it from her.”

Tweet This: “We decided right away that termination was not an option. I’m not religious but I thought if God wants Megan, he’ll take Megan"

And five days before her baby was born, she was told scans showed Megan – who was given just a three per cent chance of surviving birth – “had open wounds on her face, no cheekbones and her eyes were bulging”.

But her proud mum woke up to a sound she feared she would never hear – the voice of her 18-month-old daughter calling “Mum”.

Cassy, a former head chef, said: “It was really emotional, I didn’t think I would ever hear her say it. In the morning, she’s always vocal.

“She just shouts – no words in particular – and then she kept saying, ‘Mum. Mum’, telling me to get up.

“There are no other words – she’s just amazing.”

Indeed, Cassy recalled telling her dad as soon as Megan was born, ‘there’s nothing wrong with her’.

“Now I can’t believe the strong personality she has coming through,” she said. “She smiles through everything and is a cheeky wee monkey.”

Tweet This: Told her baby’s condition was “incompatible with life” and “strongly advised” to abort, Cassy said, “She’s proof there is always hope.

Not that the road ahead will be easy.

Cassy knows the future is uncertain and Megan is now on oxygen at night following surgery to insert stents in her nose to keep her airways open.

But the brave tot has proven doctors wrong with every prediction so far and has amazed everyone with her zest to survive.

Cassy, who is 22 weeks pregnant with her second child, said: “She’s proof there is always hope.

“A neurologist in Glasgow asked if she could smile and I said ‘yes’, then she smiled on cue, and he said ‘it takes a lot more brain function to smile than it does to do a lot of other things’.”

Editor's note: This article was published by National Right to Life News and is reprinted with permission.