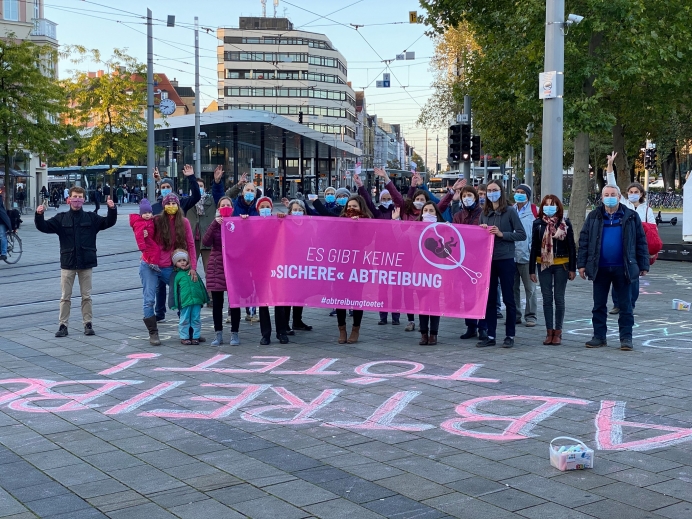 (WORLD) A lot of things shocked Alicia Düren about the first German pro-life event she attended in Augsburg in June 2019: Counter-protesters honked, swore, and screamed at participants and pulled fire alarms in nearby department stores to stop the event. “It was really, really my first confrontation with people who just hate life,” Düren said. But she was also appalled that there were about as many counter-protesters as pro-lifers in attendance: “From that event, which was pretty traumatic for me, I realized there was really a need to do something … here in Germany.”

Growing up in America, she had never done pro-life work. Now 28, she lives in Germany with her German husband and three young children, and she said local pro-lifers aren’t as vocal as those in the United States. She said Germans will often avoid confrontational subjects like abortion.

“Pro-life people also don’t want to talk about it,” said Düren’s husband, Andreas. “Especially because the only ones who talk about it are the pro-choice side.”

Abortion is technically illegal under German criminal code, but the law’s exceptions effectively permit the procedure for any reason up to 12 weeks gestation as long as the woman receives mandatory counseling beforehand. Andreas said abortion isn’t as normalized in Germany as it is in other countries, but he has noticed a push to remove legal barriers against it, including a rule forbidding abortionists from advertising the procedure. September’s elections could determine the country’s trajectory on the issue. Meanwhile, some German pro-lifers are modeling the U.S. movement’s tactics to increase awareness of the abortion issue and rally support.

Cornelia Kaminski is the president of the Germany’s oldest pro-life group, Aktion Lebensrecht für Alle (ALfA), which she translated as “Right to Life for All Campaign.” In her work with ALfA, she hosts a weekly podcast and writes letters to members of parliament to encourage pro-life votes. Her organization produces postcards, pamphlets, and online events to help educate the public and lawmakers on abortion.

According to Kaminski, ALfA’s 11,000 members make it the largest pro-life group in the country. Germany has a population of around 80 million, about a quarter that of the United States. In 2019, the country’s largest pro-life event, Berlin March for Life, drew a record 8,000 attendees—less than 2 percent of the estimated half million attendees at the March for Life in Washington that year.

“I wish we had more,” Kaminski said, but she said some people told her they don’t want to attend because of how violent and aggressive the counter-demonstrators can be. She described pro-abortion protesters grabbing pro-lifers’ posters, throwing crucifixes in the river, and yelling that Mary should have aborted baby Jesus. In 2019, she said people jumped onto the event stage and started reading from their own pamphlets.

“When you’re pro-life in Germany, you’re a freak,” Kaminski said. She sees the U.S. pro-life movement is a model for other countries. She guessed part of the reason could be America’s larger percentage of Christians compared to Germany’s dwindling numbers. “Another thing is that you use different material, different images, different pictures,” Kaminski added, pointing out some groups’ use of graphic photos of aborted babies.

She said German pro-lifers largely stopped using graphic images of abortion in the 1990s because the press accused them of pressuring women. Most of ALfA’s publications today use generic medical stock photos or pictures of moms and babies. As Kaminski remembers a seasoned pro-lifer and former lawmaker saying, “All these nice baby photos don’t do the trick anymore. People need hard-core stuff, hard-core material.”

But she said one small pro-life group in Germany has started using the graphic pictures again: Sundays for Life, started by Alicia and Andreas Düren. The name references the popular climate activist movement in Europe started by Greta Thunberg called Fridays for Future. The August after attending the traumatizing protest in 2019, the couple started standing for an hour in the Augsburg town square every Sunday holding pink signs with pro-life phrases as a “weekly presence for life.” They would sometimes hand out fliers, but people often walked on the other side of the street to avoid them.

In 2020, they brought Sundays for Life to social media. They realized there weren’t many other German pro-lifers using modern online tools to reach young people about abortion. Andreas, a videographer, made videos modeled after Lila Rose’s Live Action material. They had a German gynecologist describe abortion procedures in German on camera and posted the videos online. The Sundays for Life Instagram feed shows images and graphics of fetal development.

Since starting, their in-person group on Sundays is sometimes 30 people strong. Other days, especially in bad weather, it’s just three. But their online presence has grown to outstrip other German pro-life groups: While just over 1,900 people follow the ALfA Facebook page, Sundays for Life’s Facebook is nearing 17,000 followers.

“There’s really a need to be socially present because most people have never heard a different position,” said Düren. As she put it earlier in the conversation, “We wanted to kind of start some fires and get people involved and better informed.”

Tweet This: There’s really a need to be socially present because most people have never heard a different position - pro-life comment on Germany