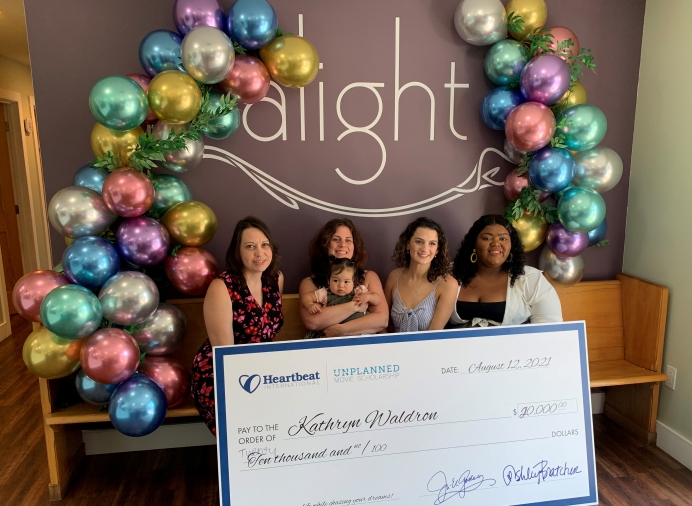 Mother of teen who chose life for her baby urges encouragement, support for moms in unplanned pregnancy

Unexpected pregnancy presents a formidable challenge even when a family has pro-life values, and one such mother whose daughter became pregnant at 16 says encouragement and support is necessary for saving these young moms.

Having a strong faith in the Lord is important, Michelle said as well, and we should constantly exhibit it to build up those in need. Parenting doesn’t have to be done alone, she said, and while not every mom who reaches out for help will choose life - it’s still important to be there for them and plant that seed.

Michelle is forthright about the details around her daughter’s teen pregnancy and her part in what may have led her daughter to consider abortion. Their story demonstrates the human – and divine - component present in every unexpected pregnancy scenario.

Michelle’s daughter Katy was the recent recipient of the Unplanned Movie Scholarship, sponsored by Unplanned lead actress Ashley Bratcher and Heartbeat International, the third such young woman to be awarded the scholarship.

Katy is triumphing, receiving support from Hudson, NY’s, Alight Center, having chosen life, and parenting her daughter Mariana, almost one. Katy also graduated early from high school and is pursuing her education. But the road has not always been smooth, as anyone familiar with such situations can attest.

Michelle is the former executive director of the Alight Center, and the family remains close to the pregnancy help medical clinic, so when her daughter become pregnant, Michelle had to process the situation on a more personal level.

“Me being the past executive director here at Alight, I was more than shocked when I found out that my daughter was pregnant,” she told Pregnancy Help News. “We had encouraged all of our daughters not to have sexual relations before marriage, but of course everyone makes their own decisions.”

Michelle said they’d also told their daughters as well that if they had an unplanned pregnancy they would never, ever want them to choose abortion.

And she felt that Katy was on the right track when she found out she was pregnant, that she wasn't going to choose abortion, that they were going to work things out.

“But again, I think that I was a little shocked and I always felt as if it was somewhat of a betrayal,” said Michelle. “So, I don't think I always said the right things to her during the first few weeks of the pregnancy.”

“I was adamant about her having the baby,” Michelle recalled, “but what she heard was probably more negative than positive. And I am ashamed to say that, but I know that that's very true.”

But when the chips were down and Katy was at immediate risk for abortion, Michelle went into action to save her daughter and her granddaughter.

Katy’s boyfriend learned that she’d gone to the local Planned Parenthood and contacted Michelle to ask her about it.

He’d called Michelle and asked why Katy was at Planned Parenthood, having seen her cell phone location.

“So, I told him, ‘I'm going to go there, I'm going to call. And I'm going to make sure that this doesn't happen,’” Michelle recounted for Pregnancy Help News.

Michelle called the Planned Parenthood and informed them she would take legal action if they proceeded with the abortion.

After arriving at the abortion facility Michelle told the staff that her daughter was a minor and she did not consent to them performing an abortion on her. Michelle called the local police department as well and told Planned Parenthood she was also calling the press, both to making it obvious in front of the abortion center that something was going on.

Michelle knew she couldn’t enter the facility but kept insisting she did not consent to an abortion being performed on her minor daughter and that they send Katy out.

Planned Parenthood staff first tried to tell Michelle that Katy was not there. Katy later told Pregnancy Help News that the staff told her that her mother was outside but that she didn’t have to go out.

She stood outside with a police officer, who told her he was a bit confused, that he wasn’t sure what she expected him to do.

It turned out that her engagement with the officer would be providential.

“As I was standing there, the police officer said to me, ‘I understand, I hate Planned Parenthood, as much as you do. My mother was the director of Planned Parenthood for 20 years,’” Michelle said. “And I was like, oh my goodness.”

The officer continued: “And I was in a teen pregnancy. And I know how hard it is. But there's nothing I can do.”

“And I just looked at him and said, ‘You're doing everything you can do right now just by being here,’” Michelle recalled.

Michelle said she didn't know that he fully understood that, but it was a blessing that he was the police officer that was sent. Another officer might have just laughed or otherwise not take what she said seriously and left right away.

A short time later Katy came out, and Michelle said she was relieved, but firmly told Katy, “Get in the car, get your stuff. We're leaving.”

The police officer immediately called Michelle over and said in a stern voice, “Ma'am, you be good to her. She's in a really hard spot.”

Because of his experience he knew what Katy might be going through.

Further regarding providence, Michelle encountered the officer the following day.

“It was such a funny thing,” she said. “The next day I was working at the school where I worked, and it happened to be that the officer came in that day for his son who goes to the school.”

“He looked at me, smiled and nodded, and I smiled back,” said Michelle. “And I've never seen them again.”

The Alight Center has been a blessing

Michelle concedes that in some ways it was extra hard to minister to her daughter in the way she would another young woman, emphasizing the need to find an organization like the Alight Center to partner with, to help in handling the bumps in the road that emotionally one might not be able to handle because it's so close to home.

Tweet This: It's important find a pregnancy help organization like the Alight Center to partner with in an unexpected pregnancy

“When it's your daughter, it's a whole other experience,” Michelle said.

“When it's someone else's daughter, it's just easier to think clearly,” she said. “It's easier to make a plan. It's easier to encourage, I think, because you're just not right in the midst of it.”

The Alight Center has been a great blessing, said Michelle, and she is grateful for all the people there who have helped Katy, guided her, and given her direction.

“And these are all things that I would have said, but for some reason at times, I just wasn't able to say them,” she said. “It just helps tremendously.”

Looking at her daughter now, Michelle said, “Katy is an awesome mother.”

"I hope she always remembers that we are all here to support her,” said Michelle.

Katy and Michelle shared with Pregnancy Help News that tension remained between them for a few days after Michelle rescued Katy from Planned Parenthood, but that Katy eventually came around.

Tweet This: “I’m glad my mom came to get me (From Planned Parenthood). I was so scared.” - Single mom Katy

Michelle also said that whatever the situation may be, parenting is a challenge and doesn’t have to be done alone.

“It is very hard if you're trying to do it without support, and we need support,” said Michelle. “We need to encourage one another, and we need to come together and really have a strong faith in Jesus Christ, so that we can build up these great kids for the future.”

This underscores the crucial need for pregnancy help organizations like the Alight Center.

Michelle said not every young woman who passes through a pregnancy center will leave with professed faith in the Lord, “But they see it through others, and you planted a seed for them. So that down the road when another seed is planted, they remember, and that continues on.”