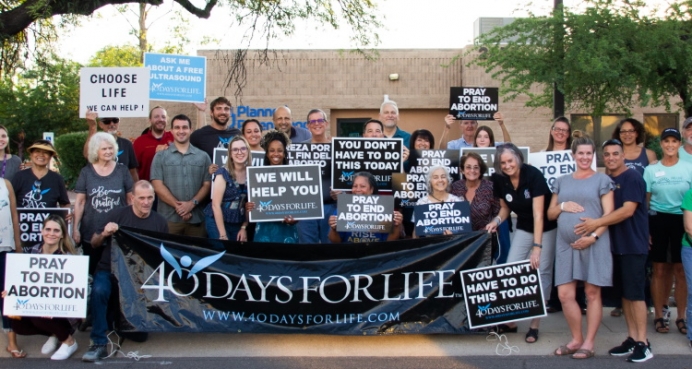 The 40 Days for Life outreach closed out 2021 with remarkable growth in terms of results, new programming, and effectiveness. And while the pro-life campaign also mourned the loss of one of its own as 2021 ended, the joy of life - trust in God - and the push to end abortion goes on.

The campaign is also celebrating the conversion of 18 abortion workers and the closing of seven more abortion facilities.

40 Days for Life is an international 40-day campaign that works to end abortion on the local level through prayer and fasting, community outreach, and a peaceful all-day vigil at abortion facilities.

Since the first 40 Days for Life campaign in 2007, the campaign has reached more than 1000 cities in 63 countries. Other totals since 2007 include 20,689 lives saved overall, 229 abortion workers who have quit the industry and 114 abortion centers closed. The campaigns have taken place in the fall each year and also in the spring during Lent.

“We launched the 40 Days for Life 365 campaign, which meant year-round prayer and witness in 64 cities worldwide,” he added. “These locations saved hundreds of babies.”

“This program will equip pro-lifers around the world to have the most important conversation in the world by reaching out to moms at the last, desperate moment before they have an abortion,” Karlen said. “We expect to see many more lives saved by those who complete this training.”

Amid the good news of additional campaigns, increased involvement, and more lives saved, 40 Days for Life suffered the loss of its Outreach Director Sue Thayer, who died after a brief battle with a rare and aggressive cancer on Dec. 21.

Thayer had spent nearly two decades running the Planned Parenthood facility in Storm Lake, IA, before speaking out against the abortion giant’s webcam abortion practices in 2008, which led to her firing.

After leaving the abortion industry, Thayer became a committed and beloved pro-life advocate, leading a 40 Days for Life campaign that closed her former workplace.

Thayer would go on to file a lawsuit accusing Planned Parenthood of fraudulent billing, she founded Storm Lake’s Cornerstone for Life Pregnancy Resource Center, and she testified before Congress about unethical practices at Planned Parenthood.

In 2018 she joined 40 Days for Life as Outreach Director.

40 Days for Life President and CEO Shawn Carney announced Thayer’s passing the day after her death, lauding her joy, her love of her family and her passion to end abortion after being part of the abortion industry for 17 years.

“Sue is the only Planned Parenthood manager to lead a campaign outside her former workplace and she will be dearly missed by her 40 Days for Life family--and the entire pro-life movement,” he said.

“Sue is irreplaceable for 40 Days for Life,” Carney said. “The local leaders absolutely fell in love with her. Her countless phone calls, her texts, her emails exuded joy.”

Thayer’s disposition was one of joy, and somebody who loved life, he said. And while she had seen the evil of abortion in the abortion industry firsthand, Thayer wasn’t bitter.

“She was clearly somebody who’d embraced the beautiful mercy of Jesus Christ that poured out of Calvary,” Carney said. “Her life was a beautiful witness to the Gospel of life.”

Tweet This: Sue Thayer embraced the beautiful mercy of Jesus Christ that poured out of Calvary. Her life was a beautiful witness to the Gospel of life.

Thayer’s family plans a celebration of life for Thayer Jan. 8 in Alta, IA, and a GoFundMe account has been established for them.

In a tribute video produced by 40 Days for Life, Thayer discussed the first 40 Days for Life Campaign at the Storm Lake Planned Parenthood organized by her, expressing how it was a big step of faith to do the campaign, that she was hesitant to put herself out there with it, and that she didn’t expect much at first.

God had been nudging her that she hadn’t spoken up enough, Thayer said.

While getting help over the phone with organizing the campaign from a 40 Days for Life representative named Lauren, Thayer shared her hesitation and limited expectations for the campaign.

Lauren responded, “Sue, why would you want to limit God?"

With this and other nudges Thayer said that ultimately, God was telling her to “get out and get going.”

“More and more pro-lifers around the world are taking a leap of faith and placing their trust in God to transform their communities by standing in peaceful prayer in front of their local abortion facility,” he said. “The power of prayer is why we saw more than 2,200 babies saved this year alone, why we learned of the 229th abortion worker to leave her job and become pro-life, and the 114th abortion facility close forever—including in abortion-friendly communities like Chicago, London, and Seattle.”

“The increase in participation reflects a recognition that we can’t count on politicians to end abortion for us,” Karlen said. “Only God can end abortion, and in His generosity, He invites us to be part of the solution to the abortion crisis.”