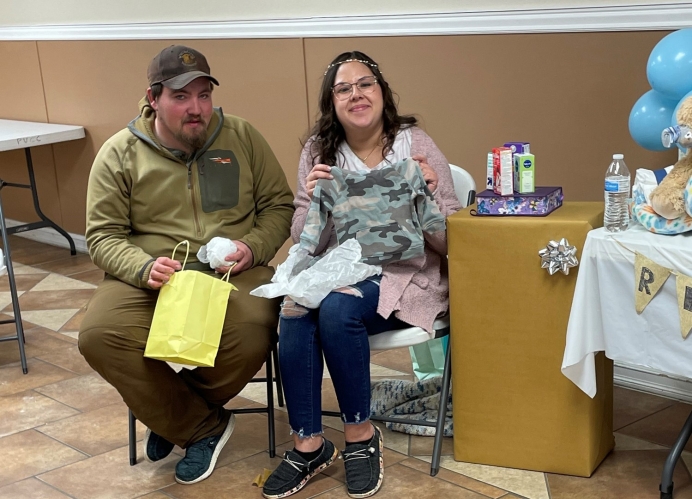 Christmas and the New Year are bringing extra excitement to many families this year as new dads receive mentorship thanks to a fresh national program.

The national Texas-based Embrace Grace organization launched Embrace Legacy in March 2021. The program helps new dads face their fears and recognize ‘roots’ of attitudes and actions, and seeks to replace “the lies of the enemy with God’s truth, the truth of who He says these men are,” according to Embrace Grace founder and president Amy Ford.

“It’s a heart transformation,” she said.

“A lot of them are struggling with unforgiveness toward people in their lives that they’ve been holding onto and that’s really affected them and their decision-making,” she said. “It’s really powerful, but it’s delivered in a simple, easy to understand way.”

Programs in the U.S.

Thirty-three programs have started since the inception of Embrace Legacy. One of those start-ups took place this fall at Paradise Valley Christian Church in Casper, Wyoming, which started an Embrace Grace program a few years ago. Three young men completed the initial Legacy program there, according to co-leader Paul Marvel.

“Embrace Legacy is an opportunity to reach some people that are in a situation that’s not ideal, people who have a need and to share with them a better way, a better way of dealing with life,” he said.

Although a curriculum guide was provided, Marvel said he and the other two leaders didn’t always follow it. Their primary focuses involved relationships and being a father, topics of interest to the young men and the leaders.

“I’m big on marriage and reconciling relationships – I feel like God has called me into that area,” Marvel said. “So, just sharing with them what a true relationship should look like and encouraging them … whether they believe (in God) or not.”

Being flexible with this program isn’t frowned upon, Ford said.

“It’s cool to see how the leaders are taking those teachings as a foundation but then building off of it based on what the guys need and what they’re going through,” she said. “The male leaders are customizing (the curriculum) to what the men (participating) might need at the time.”

Deciding on a name for the new program became an exercise in prayer and brainstorming.

“We decided on Legacy because we want to change the patterns that have been passed down from generation to generation and make it so there’s a new healthy and Godly pattern from here on out,” Ford said. “It doesn’t have to be the same as it always has been. There’s a new legacy that is built for these dads. We felt ‘legacy’ was the word we really wanted to drill into their hearts.”

“The girl is kind of our conduit to get the guy,” she said.

The need for a program for new dads became apparent as more men came with their partners to Embrace Grace, she said. However, those men could not attend Embrace Grace so some men within churches began stepping up, meeting with a guy or two over coffee while the young man’s partner attended Embrace Grace, she explained. That was happening “more and more” and “men began reaching out,” asking about what curriculum to use, and she and her staff offered suggestions “based on the circumstances.” They recognized what needed to happen.

“We need to have a dad’s curriculum,” Ford said.

A male board member of Embrace Grace who was raised by a single mother took charge and developed Embrace Legacy.

Planting the seeds of the gospel is an integral aspect of Embrace Legacy, just as it is with Embrace Grace. Marvel, with his small group in Casper, said he and the other leaders saw growth in the three men they mentored this year.

“Our hope is that one day they come to Christ and that we plant a few seeds,” he said. “We had people from all different backgrounds coming in; one guy doesn’t necessarily believe but he listened.”

Marvel added, “It’s interesting watching them grow. They’ve asked for a Bible so they can start reading, even the one who says he doesn’t believe – that’s pretty cool.”

Those seeds can lead to deeper, more positive roots.

“One guy even developed a better relationship with his family, his siblings,” Marvel said. “That gives us opportunity to follow-up with that and try to help them along the journey, wherever they are at.”

He intends to invite the young men on an outdoor adventure, such as fishing and/or a shooting sport activity. The planned day in early December was postponed because of inclement weather.

“We’re there to become friends and build a relationship with one another. We’re going to get together and do guy stuff,” Marvel said.

A men’s event is part of the Embrace Legacy program, just as Embrace Grace provides a Princess Day for the women who participate, Ford said. The men’s event is left up to the leaders to organize. She knows of one group who went hunting and another watched a big sports event together.

“We wanted to launch the curriculum even though we didn’t really know that part yet and leave it up to the leaders to make that decision,” Ford said. “That part is still a work in progress. We’re collecting more ideas.”

The future of Legacy and its impact

“Our goal is that more men will step up to lead,” she said. “We want to encourage men that they have a role in the pro-life movement as well, and this is one way they can do so.”

Marvel believes this is important work for Christian men.

“Embrace Legacy gives the men of the church the opportunity to serve and work in this ministry,” he said. “Not only that, but having the men involved reinforces the idea of God’s design for the family. Perfect in an imperfect world. Praise God!”

Tweet This: Embrace Legacy gives men the opportunity to serve in pro-life ministry. Having the men involved reinforces God’s design for the family.

His church plans to have another session in 2022.

Embrace Legacy is important for another reason, Ford said.

“If we had more men mentors out there who would be a spiritual father to these guys who don’t really have a dad, whether it’s for single dads or young teen men, it would change everything,” Ford said. “So, we’re hoping and praying that we can rally the troops.”