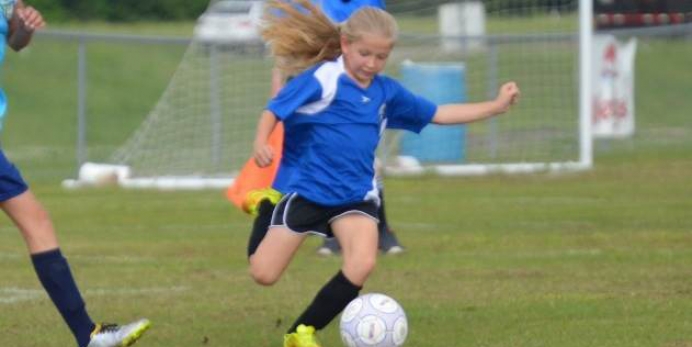 Say Hi to Kynlee. Her Mother Rejected Abortion, Chose Life for Her.

Meet Kynlee. She's a sweet, soft-spoken little girl who loves Jesus. She enjoys cheerleading, soccer, and spending time with her friends. She is the apple of her mother's eye.

Nine years ago, however, this beautiful little girl almost wasn't.

Mesha, Kynlee's mom, was already a single parent when she became pregnant a second time. Scared and alone, Mesha decided she would have an abortion. She traveled to the abortion clinic with money in hand and was determined to end her pregnancy.

Mesha had told no one that she was pregnant and planned to keep it that way. In her fear and desperation, abortion was the only answer she could see.

At this point in her life, Mesha had already beaten the odds, kicking drug and alcohol addictions. Now clean and sober, she was raising a daughter alone, and had just recently joined a church. In her heart, she knew abortion went against every Christian belief she held.

Mesha was just so afraid of what others would think of her, she found herself at an abortion clinic.

At the clinic, Mesha was told everything would be okay. After all, this was her body, her choice. Her baby wasn't a baby yet. “It” was just a blob of tissue. All she had to do was take these pills and everything would be over. She could go back to her life and no one would ever be the wiser.

But then she had second thoughts. What if the abortion started while she was at work? Mesha couldn't take that risk, so she returned the pills that had weighed heavy in her hand and scheduled an appointment for a surgical abortion.

Mesha went home and waited for her abortion appointment, all the while pretending not to be pregnant. But as she sat in her living room, the walls began to close in and she felt more alone and empty than ever.

Tweet This: She had an #abortion appointment, but skipped it to save her daughter. #prolife

At her lowest point, Mesha heard a voice, saying, "Do not care what anyone on this earth thinks of you. The only person that matters is Me."

She knew instantly that the voice belonged to God. She fell to her knees on the living room floor and begged for help and forgiveness. She didn't even know what she needed or what to pray for, but she believed His words and replied, "Okay, Lord, I'm yours. What do I do now?"

Mesha went on for the next few days, hanging onto the words she had heard. Back at work, an abdominal pain hit her so hard she knew she had to get to the hospital. She called her sister and was rushed to the emergency room. She feared the worst, but still kept her pregnancy a secret.

As she sat in the exam room with her sister by her side, God intervened. A nurse entered the room and announced that Mesha's pain was coming from a kidney infection, and that tests had also revealed that she was pregnant. Stunned, her sister turned to her, but Mesha was no longer afraid.

Her secret had been revealed, and that was fine by her.

The date for Mesha's abortion appointment came and went. Mesha didn’t keep her appointment, but she did keep her child. She rejoiced with her family and friends over the new life growing in her womb.

From that moment, Mesha says she has fought to allow God to control and guide her every step. Mesha’s life isn’t perfect. It's been a long journey, but her faith is strong, and she has grown in ways she never knew possible.

In the process, Mesha has reached out to her local pregnancy center, volunteering herself to come alongside the group in its life-saving mission.

What drives Mesha to tell her story?

"I'm telling this to honor God and to show how faithful He is and how any wrong can be turned into something for His glory," she says.

That something is a little girl named Kynlee.