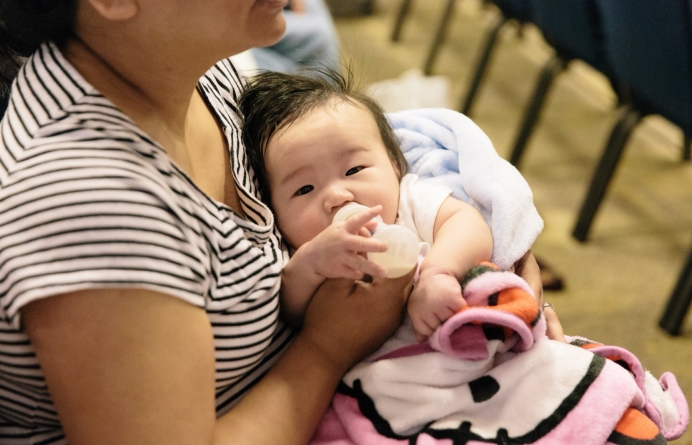 For the first time since Harvey made landfall in Houston last weekend, Meredith Phillips was able to take the time to enjoy a hot meal Thursday afternoon.

Coming on the heels of several days’ worth of adrenaline, and with weeks and months ahead of her to process the impact of the storm, it was a well-earned—if too brief—respite for Phillips, a Houston resident who helps operate a Christian housing ministry for pregnant moms called LifeHouse.

As the storm approached late last week, Phillips and her team had to evacuate their program’s residents from one of its three locations, relocating the expectant mothers away from the rising water.

Once the nine pregnant women, as well as LifeHouse staff members—one of whom had to be rescued from a rooftop—were safe and sound, Phillips turned her attention to reaching out to expectant moms scattered throughout area shelters.

Bringing Help to the Shelters

Her first stop was nearby Lakewood Church, which was maligned along with its pastor, Joel Osteen, earlier in the week when local residents accused the megachurch of refusing to take in residents displaced by the storm. That wasn’t the case by the time Phillips arrived to help Wednesday morning, however, as Lakewood was bustling with activity.

“They had created a shelter on one floor and were offering services on another floor,” Phillips said. “There were so many volunteers that came, they were turning away volunteers, but I came in because I wanted to offer LifeHouse as a resource to any displaced pregnant women.”

Introducing herself to a volunteer who was overseeing the medical station at Lakewood, Phillips told him what she was there to do, and in return, he asked her to stay and work the rest of the day.

By the end of the day Wednesday, Phillips had talked at length with five expectant mothers who had lost their homes and had nowhere to go. She was able to immediately place one of the women in LifeHouse, which has the capacity for as many as 18 moms at a time, while the team helped connect 10 more women to vital resources within the community.

“We really worry about that pregnant woman who has been in this kind of stress,” Phillips said. “We want to be able to give her an environment where she can rest physically and emotionally and be able to nurture the baby who is growing inside of her.”

One of the women Phillips met Wednesday is due this November with twins. She had just moved to Houston from Alabama to take a teaching position when the storm hit, washing away everything she had packed in the move.

With the woman’s family still in Alabama, Phillips was able to get her out of the shelter at Lakewood and into a bed at LifeHouse on Wednesday night.

“For someone who’s never been through the floods of Houston, and on top of that, one of the largest floods in history, then you add that she’s away from her family and pregnant with twins—that’s a lot,” Phillips said.

Philips and her team also reached out over social media and were able to recruit five social workers and five counselors to join them during the crisis, streamlining LifeHouse’s intake process and growing their ability to help expectant mothers through the crisis.

Meanwhile, LifeHouse reached out to maternity homes in a 300-mile radius of Houston via email Thursday to see if any of those ministries could house women affected by Harvey.

“We’re definitely in the mode of mobilizing and equipping our staff and any volunteers who are able to help,” Phillips said.

Along with LifeHouse, Heartbeat International is reporting that several of its affiliated and allied pro-life pregnancy help ministries are back up and running amidst the devastation caused by Harvey.

The downtown location and mobile ultrasound unit for Houston Pregnancy Help Center are both open as of Thursday, while the center’s Fifth Ward location sustained minimal damage and will need new carpeting before reopening.

In Lake Charles, La., New Life Counseling executive director Jeanne LeBato said her center was being used as “a place of refuge” in her community, distributing diapers, wipes and baby clothes to area shelters. Ark La Tex Learning Center in Shreveport, La., also checked in, reporting no damage from the storm.

In the midst of all the stress the past week has brought on—and with the many months and years of recovery ahead—Phillips said her team has bonded together like never before.

“We’re having to access strength from a place we’ve never had to access before,” Phillips said. “We’ve been able to run off of Scripture and encouragement from each other, being the hands and feet of Christ together. That’s how we were able to really get through it. Now, we’re in a place where we have to emotionally process it, and that will take a little bit longer.”

Heartbeat International is accepting donations to help offset the cost of damages for affected pregnancy help centers and maternity homes. Click here to give.