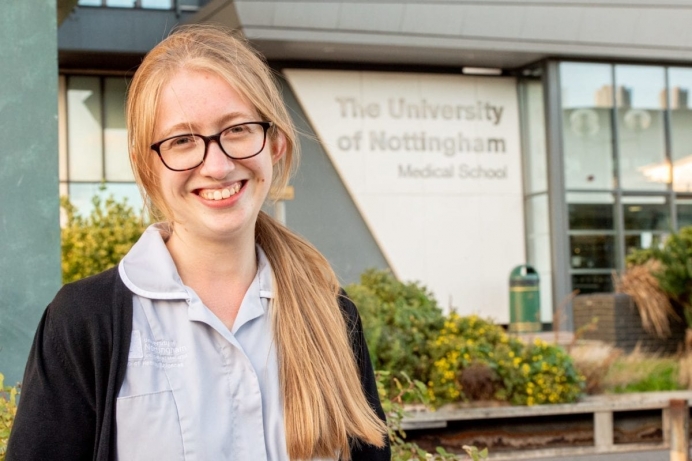 Julia Rynkiewicz, a pro-life midwifery student at the University of Nottingham in the U.K. ADF International

(CNA) A pro-life undergraduate student in a midwife program has received an apology and payout after she faced suspension.

The Daily Telegraph reported Nov. 24 that Julia Rynkiewicz, a  25-year-old Catholic, had reached a settlement with the University of Nottingham in the U.K.

She was blocked from entering her program’s hospital placement phase after the university learned of her leadership of a pro-life student group. She faced a four-month-long fitness-to-practice investigation in 2019.

The university overturned its decision in January, but Rynkiewicz sought an apology.

“The settlement demonstrates that the university’s treatment of me was wrong, and while I’m happy to move on, I hope this means that no other student will have to experience what I have,” she told the Telegraph.

“What happened to me risks creating a fear among students to discuss their values and beliefs, but university should be the place where you are invited to do just that.”

Tweet This: “What happened to me risks creating a fear among students 2 discuss their values & beliefs" Julia Rynkiewicz, suspended for pro-life beliefs

Concerns were raised about Rynkiewicz’s fitness to practice as a midwife after she was seen tending a booth at a school fair in her position as president of Nottingham Students for Life (NSFL), an approved pro-life student group that supports life from conception to natural death.

The Students’ Union had initially denied affiliation to NSFL, but overturned its decision in July 2019 following the threat of legal action.

Rynkiewicz said that she received a letter from officials at her midwifery school days after the fair, saying that a formal complaint had been filed against her.

A spokesperson for the University of Nottingham said: “While all universities take fitness-to-practice considerations extremely seriously, the university has offered an apology and settlement to Ms Rynkiewicz and is considering how we might approach such cases differently in future.”

“The university and Students’ Union supports the rights of all students to bodily autonomy and access to safe, legal abortion services, which is the position in law.”

“Universities should be spaces to debate, discuss and disagree points of view, and with more than 200 student societies, covering the full range of beliefs and perspectives, we are confident this is the case at Nottingham.”

Catherine Robinson, a spokeswoman for Right To Life UK, welcomed the university’s apology.

“The fact that this happened at all though, is a strong indication that the university does not take its commitment to debate and discussion seriously,” she said.

Referring to a recent survey which suggested that more than a fourth of U.K. students censor their opinions because they clash with those of their institutions, she added: “Worryingly, 38% of students fear their future careers would be adversely affected if they express their true opinions.”

“So long as universities continue to discriminate against mainstream views, pro-life and others, debate and discussion will continue to be stifled and students will increasingly fear reprisals from their university.”