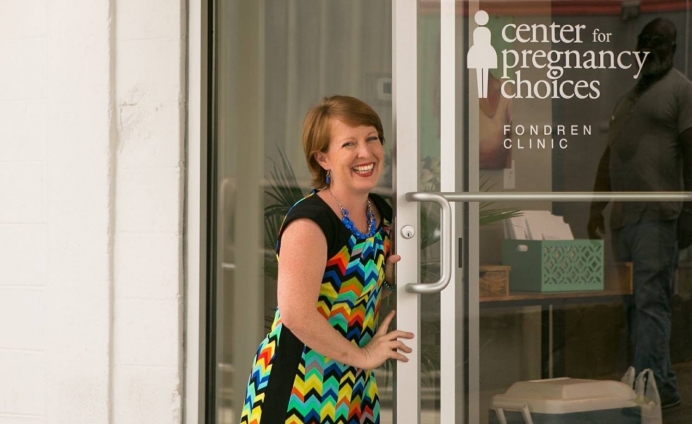 The only abortion business still operating in the state of Mississippi has a new pro-life neighbor as of April 22, with the Center for Pregnancy Choices cutting the ribbon on its third location just 100 yards away from the clinic’s pink-painted façade.

Behind the veneer of the Jackson Women’s Health Organization, close to 2,300 women resort to abortion every year, turning to a list of practitioners that includes self-styled “Christian abortion doctor” Willie Parker, author of the 2017 book, “Life’s Work: A Moral Argument for Choice.”

Now, women in Jackson have one more opportunity to choose life for their unborn children in the heart of the culturally thriving Fondren district. More importantly, the new location is a one-minute walk from the abortion clinic, with the entrance tucked away to allow patients a private entrance and exit.

“We are beyond excited to be there,” Erin Kate Goode, Center for Pregnancy Choices’ executive director said. “We’ve been trying to get there, and it’s finally taken place.”

The location fulfills a long-held dream of Barbara Beavers, a founding board member of Center for Pregnancy Choices in 1988 who has served as executive director for the past 25 years.

Closing in on 30 years of pro-life ministry in Jackson, Beavers’ work has always included tending to the post-abortion needs of former clients at the abortion clinic, and now that the intervention piece is in place, she’s passing the leadership baton to Goode, effective May 1.

Beavers and her team started zeroing in on an office space across the street from the clinic in 2014, but weren’t able to raise funds in time to rent it out. After the hopes for that space fizzled, a man came into the office and told Beavers his desire to help rescue lives from abortion.

“He drove right there, first thing in the morning,” Goode said. “He went into tears, talking about how he needed to do something about the abortion issue. Then, a couple of weeks later, two other guys came in together and said they felt like they needed to come help us.

That’s exactly what the two men did, connecting with the first man who’d visited Beavers—who turned out to be a mutual friend of the other two. The three men worked together to acquire the space and set a plan for getting it move-in ready.

Ground-breaking was last October, leading up to this April’s ribbon-cutting.

“This neighborhood is the hottest thing in the state,” Goode said. “It’s way more than we could pay, and he’s truly sacrificed to provide that space for us, because he knows that’s what God wants him to do.”

Along the way, the center has brought in Duck Dynasty’s Phil Robertson and Mississippi Gov. Phil Bryant as banquet speakers to pitch the vision and raise the funds they’ve needed to start serving women a football field away from the abortion clinic.

In stark contrast to the abortion clinic’s pink façade and toxic interior, the inside of the Center for Pregnancy Concerns’ new location is a decisive highlight—with an ultrasound machine topping its list of most important furnishings.

Goode and her team are exploring adding free STD/STI testing at the site as well, as they move a ministry that has served 22,000 clients into the next era of life-affirming care.

“It’s so pretty inside,” Goode, who has been on the center’s staff for four years, said. “It’s new and fresh, and that’s important in a neighborhood like this. It’s artsy and definitely not the conservative group. We’re excited to be there to serve and be a resource to the community.”